President Without Receiving a Single Vote, 1974

n listing the American Presidents in order, the one left out most often in the 20th Century is Gerald Ford. Part of the reason may be that he conducted no campaign to become either President or Vice President, nor did he receive a single vote to obtain that office. His achievement could only have occurred the way it did. Some people today think the United States may experience a similar outcome though for different reasons with the current holder of the highest office in the land. 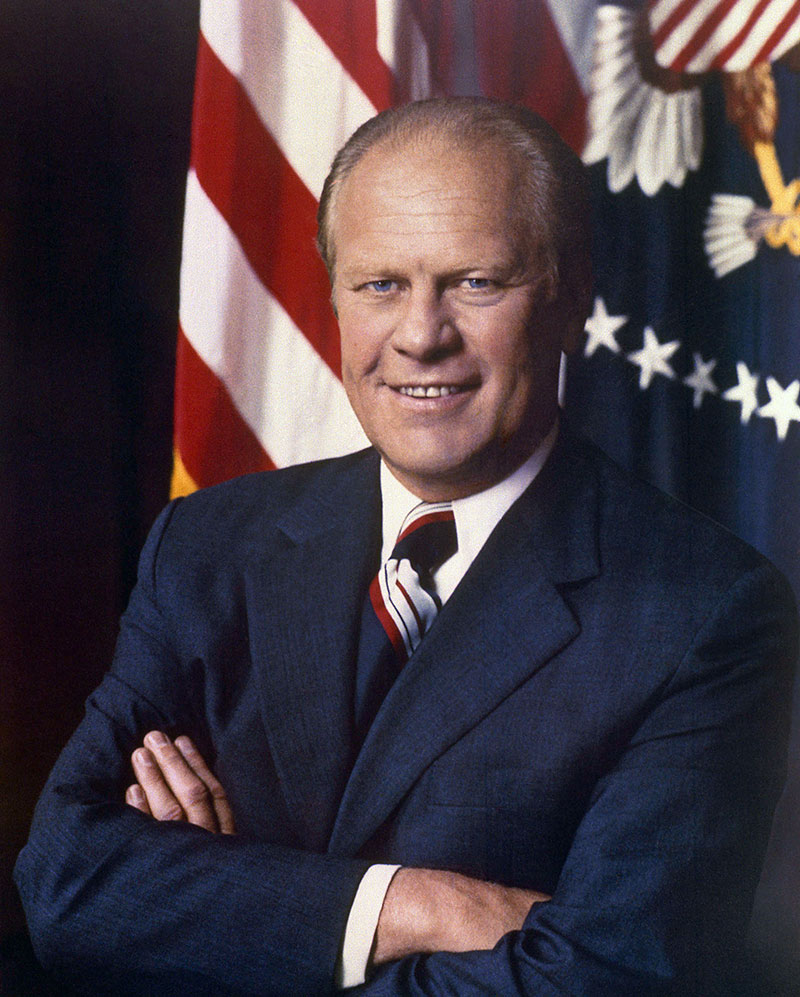 Leslie Lynch King, Jr. became Gerald R. Ford, formally, at the age of 22 in 1935. His mother had left Mr. King years earlier for spousal abuse, and moved from Omaha, Nebraska to Illinois, to Grand Rapids, Michigan, where she married Gerald Rudolff Ford, a salesman for a paint and varnish company. Her son Leslie from then on took his step-father’s name. He grew up with three step-brothers: Tom, Dick, and Jim. Gerald Ford achieved Eagle Scout, the only American President to do so. His outstanding athletic prowess and leadership achieved him captaincy of the football team, election to all-star teams, and a stellar career at the University of Michigan. He helped lead his team to two national championship and his team members voted him as MVP. Upon graduation with a degree in economics, Ford rejected pro football contracts in favor of attending law school at Yale, and coaching there. 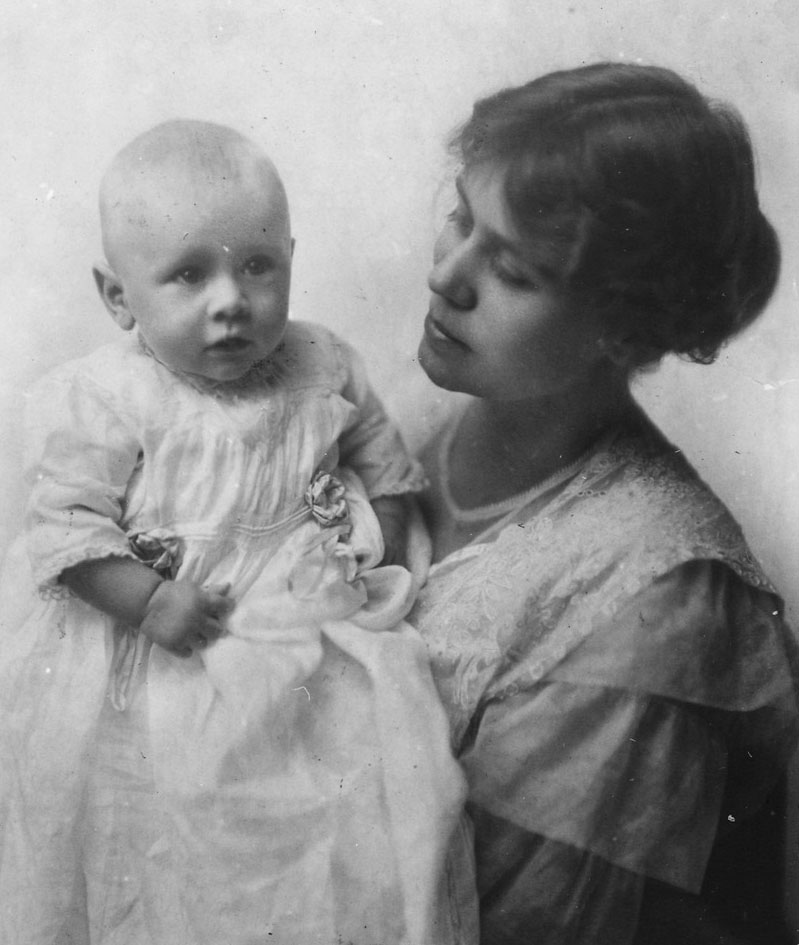 Ford (then Leslie King) and his mother, Dorothy Ayer King, on his baptism day 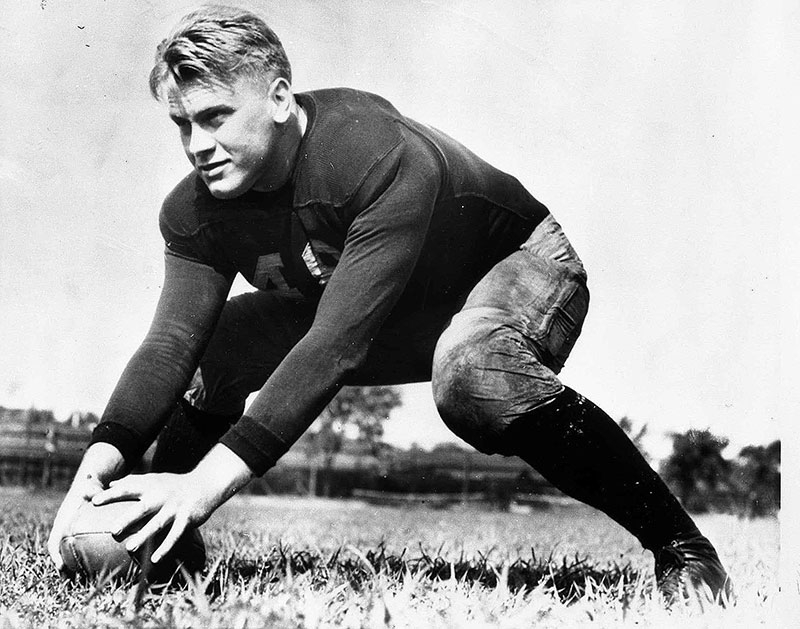 Ford on the field for the University of Michigan football team, 1933

Immediately after the attack on Pearl Harbor, Ford enlisted in the Navy, commissioned as an ensign, and coached all nine sports offered at Navy Pre-flight School, as well as teaching navigation, ordnance, gunnery, and first aid. By the time he went to sea, Gerald Ford was a lieutenant. Among his service accomplishments was saving his aircraft carrier—the USS Monterey—during the typhoon that sank three destroyers with the loss of 800 men. His ship caught fire when planes broke loose and started fires amidships. As Officer of the Day, Ford fought his way to the hangar deck and took charge of the situation, saving the ship and the crew. 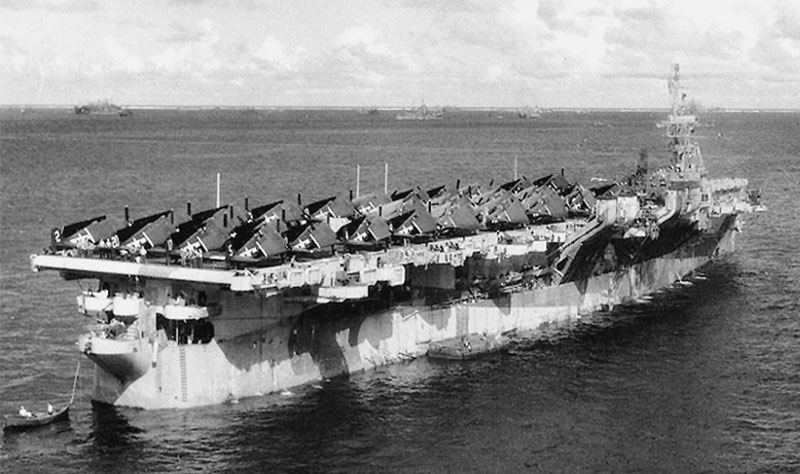 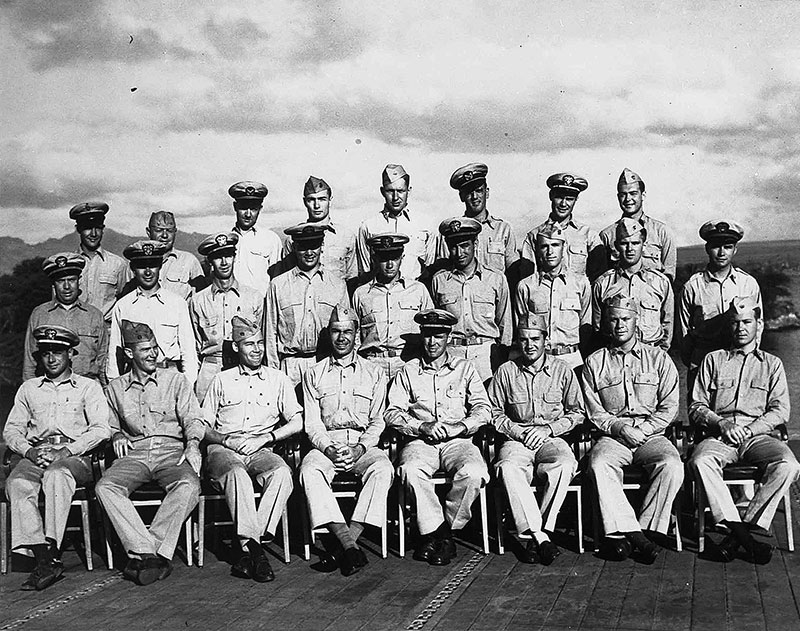 The gunnery officers of the USS Monterey; Ford is second from the right, in the front row

Ford was elected to the United States House of Representatives in 1946 as a Republican and served there for twenty-five years, turning down offers to run for the Senate and for Governor of Michigan. His negotiation skills and work to conciliate conflicting opinions won the respect of all his colleagues in the House. Ford was a “moderate” in domestic policy and an internationalist in foreign policy, fighting against states’ rights, but also helping blunt Lyndon Johnson”s big government “Great Society” programs. He voted for all of the Democratic Party’s “civil rights” programs. He angered Johnson with his opposition to the Vietnam War—the President said Ford had played too many football games “without his helmet.” 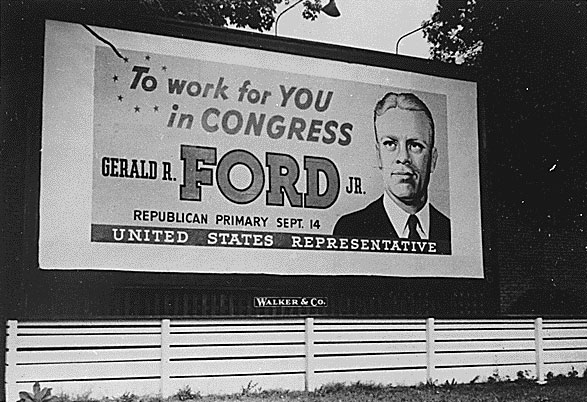 A 1948 Michigan billboard for Ford’s campaign for US Representative

Ford had a pleasant personality, was non-confrontational and known for fairness, winning plaudits and developing friendships on both sides of the aisle. His greatest political power came with fellow Republican Richard Nixon in the White House. In 1973, the conservative Vice President, Spiro Agnew, resigned over criminal charges of tax evasion and money laundering, and the party leaders insisted that Nixon choose Ford as the new Vice President, a position the Michigan Congressman accepted and appreciated. The following year, President Nixon was hounded out of office by the mass media and the Democratic Party leadership, impeached and vilified with unprecedented hatred unleashed by his adversaries. The man who had won the office in a landslide resigned the Presidency (the first in history to do so), and Vice President Ford became President of the United States on August 8, 1974 without ever running for either office—an utterly remarkable turn of events. 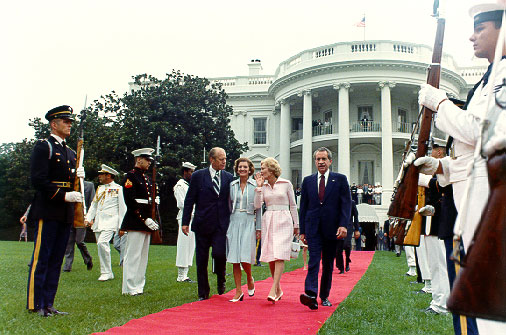 Gerald and Betty Ford escort Richard and Pat Nixon from the White House to a waiting helicopter on August 9, 1974, following Nixon’s resignation from the presidency 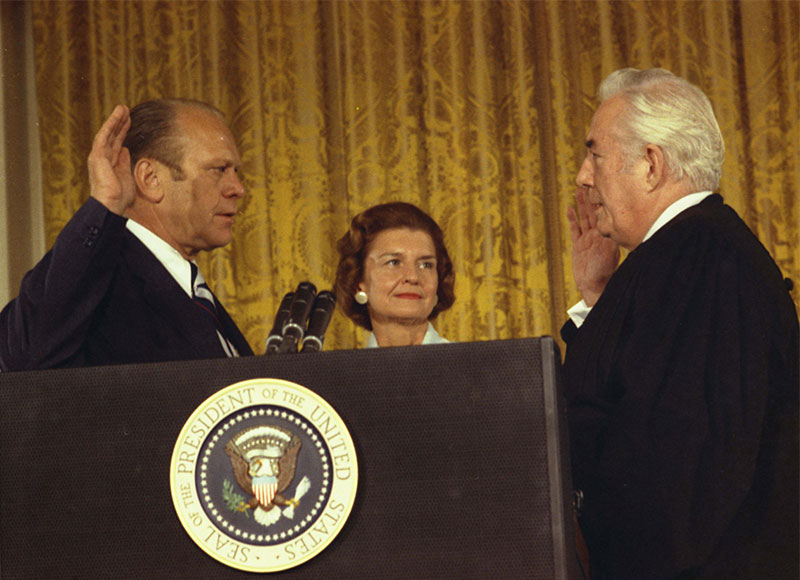 The swearing in of President Gerald Ford by Supreme Court Chief Justice Warren Burger, with Mrs. Ford looking on

Ford chose the liberal Governor of New York, Nelson Rockefeller, as Vice President, angering the conservative Republicans, and not for the first time. His time in office included issuing amnesty for draft dodgers, support for abortion rights and outspoken support of the “equal rights amendment” which failed to pass. With the advent of the “swine flu epidemic”, Ford urged every American to be vaccinated. He resisted billions in aid to Israel and faced powerful resistance from men of both parties. The media portrayed him as a clumsy oaf and klutz, the exact opposite of his actual life. He was the target of two failed assassination attempts. A number of his fiscal policies reflected his more conservative instincts in economics. 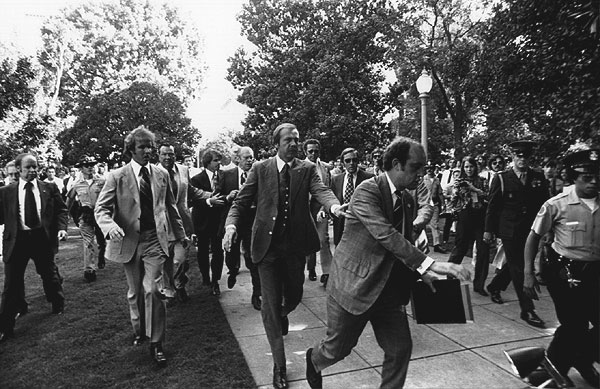 Most historians consider Ford’s Presidency a failure, but his pardoning of Nixon would have gotten him that rating all by itself. He lost the 1976 election to Jimmie Carter of Georgia, in a close electoral vote. The athletic Michigan Congressman turned President lived to be more than 93 years old, surpassed by the man who defeated him, Jimmie Carter, who is currently 97. Citing the Ford Presidency, there are some pundits who foresee the current Vice President Kamala Harris getting bought off to resign, President Biden choosing someone like the Governor of California, Newsome to be Vice President, then Biden resigning due to health problems. Voilá! An unelected president devoted to the Californiazation of the United States! Where is Gerald Ford, or Jimmie Carter for that matter, when you need him? 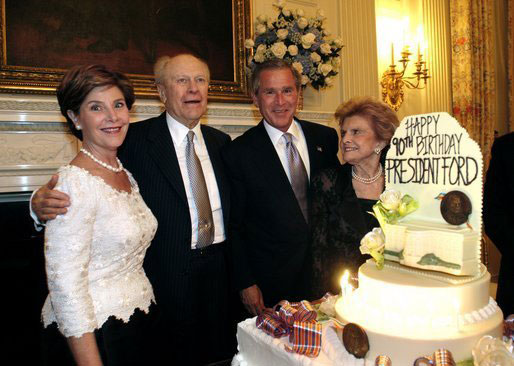 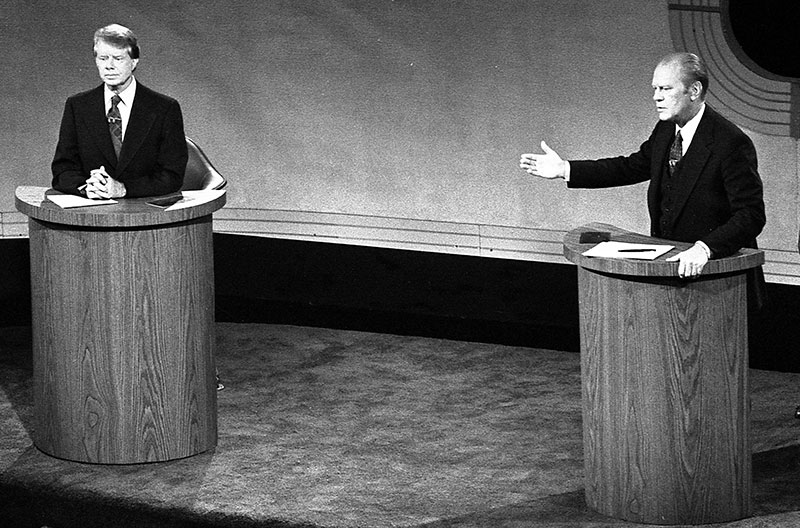