Return to the Lost Colony of Roanoke, 1590

“Sing to the LORD a new song, Sing His praise from the end of the earth! You who go down to the sea, and all that is in it You islands, and those who dwell on them.” —Isaiah 42:10

isappearances from history have intrigued researchers for centuries. Where did the Confederate gold go after the government fled Richmond? What happened to solo aviator Amelia Earhart on her round-the-world flying trip in 1937? Did D.B. Cooper survive his jump from Northwest Flight 305 with $200,000 from the hijacking? What happened to the Sir Walter Raleigh-sponsored English colony that landed on the Outer Banks of North Carolina in 1590, then seemingly vanished without a trace within two years? There is an answer. 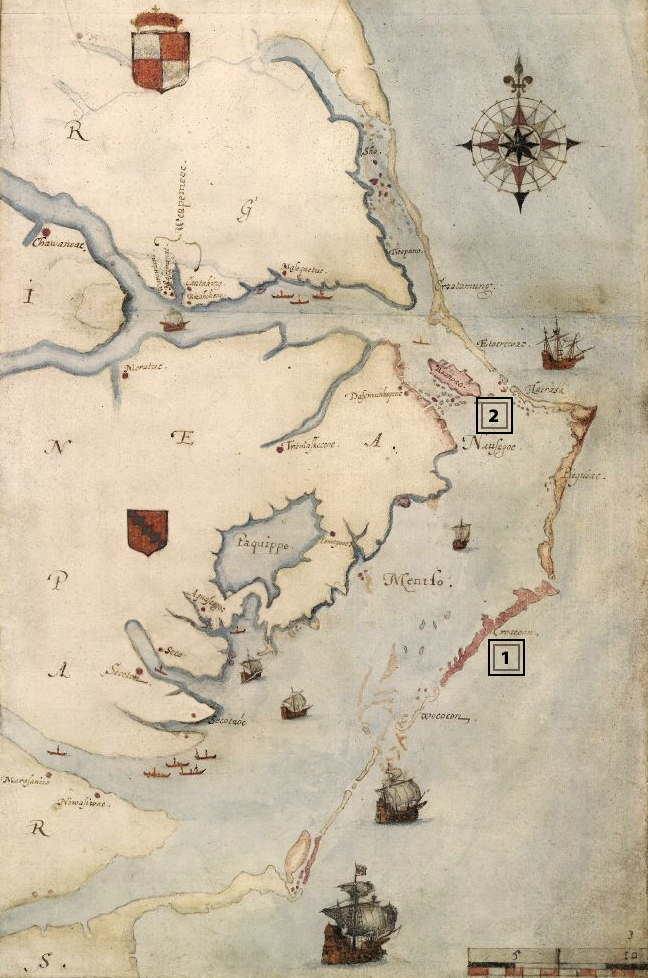 The Outer Banks are a two-hundred-mile chain of barrier islands off the coast of Virginia and North Carolina, mostly the latter. Those sand islands are not tethered to coral reefs in any way, and exist by the providential recipient whims of hurricanes. The weather there is always windy and the treacherous nature of the area has made offshore waters, “the graveyard of the Atlantic” for five hundred years. 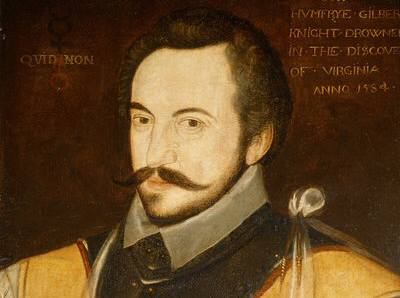 Sir Humphrey Gilbert (c. 1539-1583) member of Parliament, explorer, adventurer, and soldier during the reign of Queen Elizabeth I

International competition and hatred between England and Spain, provided the setting for attempted permanent English settlements in the New World in general and the Outer Banks in particular, starting in the 1580s. Sir Humphrey Gilbert, a Devonshire MP, bloodthirsty conqueror of Ireland, explorer, writer, and rogue, convinced Queen Elizabeth I to support English colonization efforts in America, north of the Spanish settlement in Florida. Gilbert went down with all hands aboard off the Azores, but his younger half-brother, Sir Walter Raleigh, picked up where Gilbert left off, and set sail with a royal patent to search for “remote, heathen and barbarous lands, countries and territories, not actually possessed of any Christian Prince or inhabited by Christian People,” in return for one-fifth of all the gold and silver that might be mined there. Raleigh himself set off for the coasts of South America to poach Spanish treasures, but sponsored others to probe for settlement along the Virginia coast. 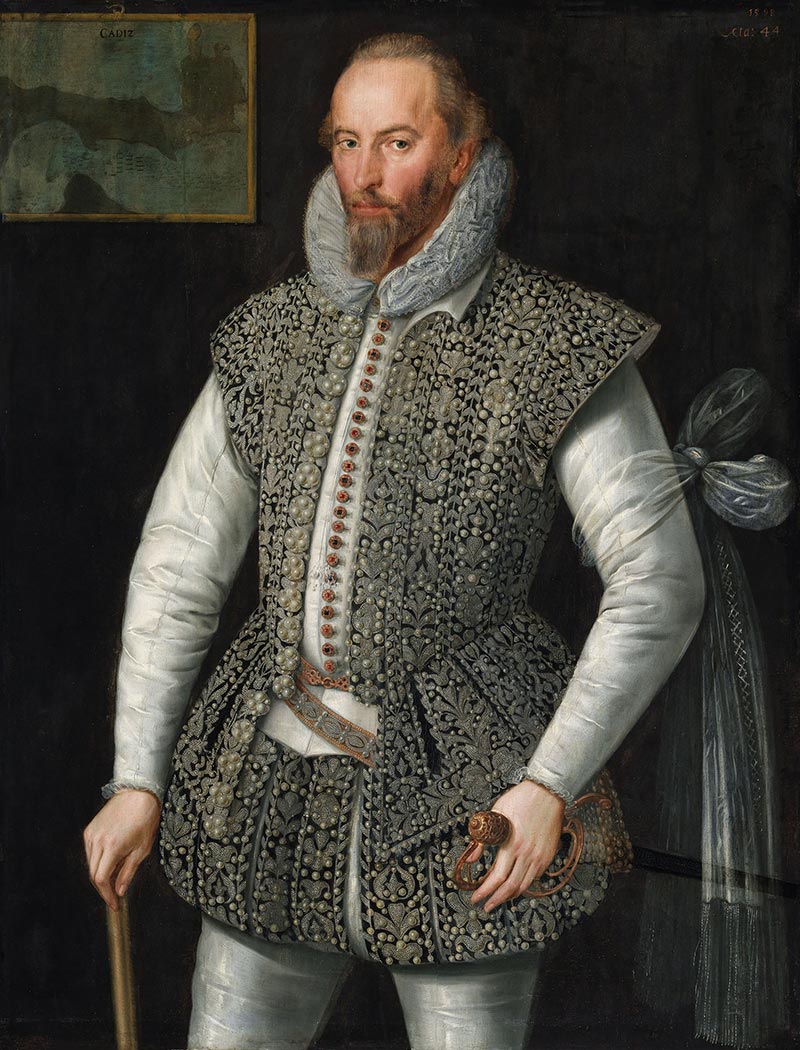 A first attempt in 1585 failed to stick; they returned to England with Sir Francis Drake’s ships, along with a chief of the Croatan tribe named Manteo. The Roanoke settlers led by Ralph Lane, had found survival difficult without enough food, plus they antagonized the local tribes. Geographer and spy, the Rev. Richard Hakluyt and several others, lobbied for another try and Raleigh complied. A second colony was planted by John White on behalf of Raleigh’s Joint-stock company, in 1587, with all the hopes of a permanent settlement, bringing whole families. The expedition of about 115 people landed on Croatoan Island without an organized military force, mostly middle class Londoners. Some opposed the colony since the previous company had killed Indians and beat a hasty retreat. Hakluyt thought the Chesapeake region safer, but the settlers landed on Croatan, where the fighting had taken place and an English stockade stood empty. 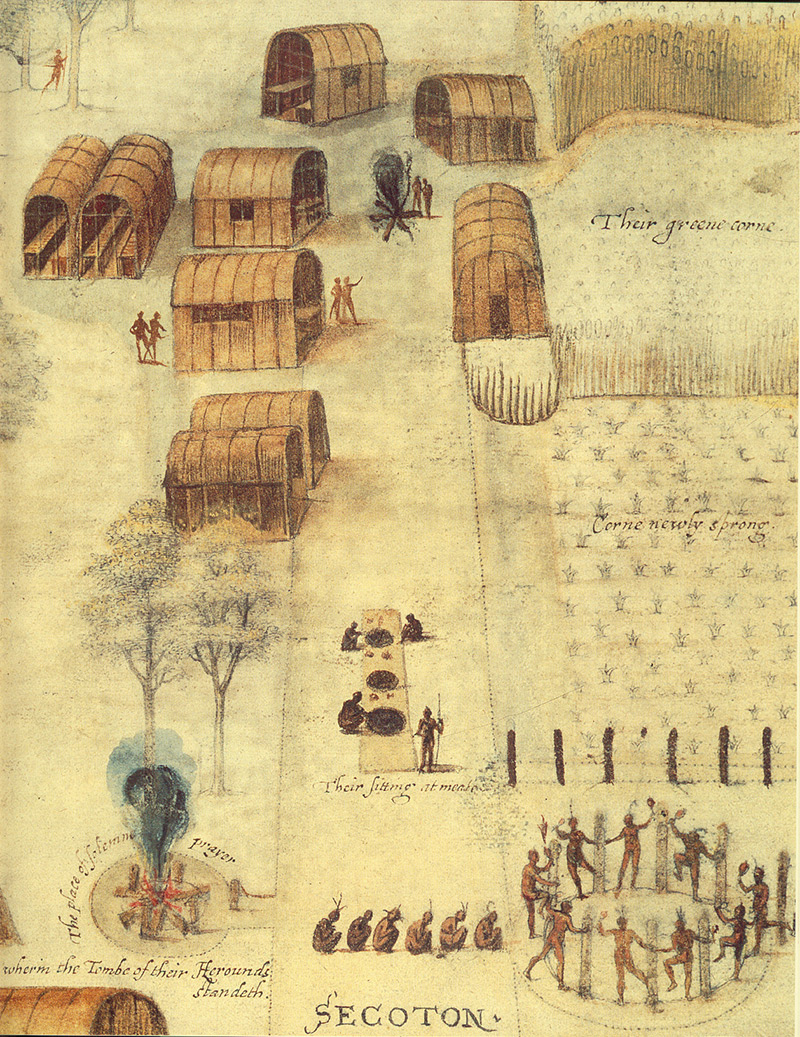 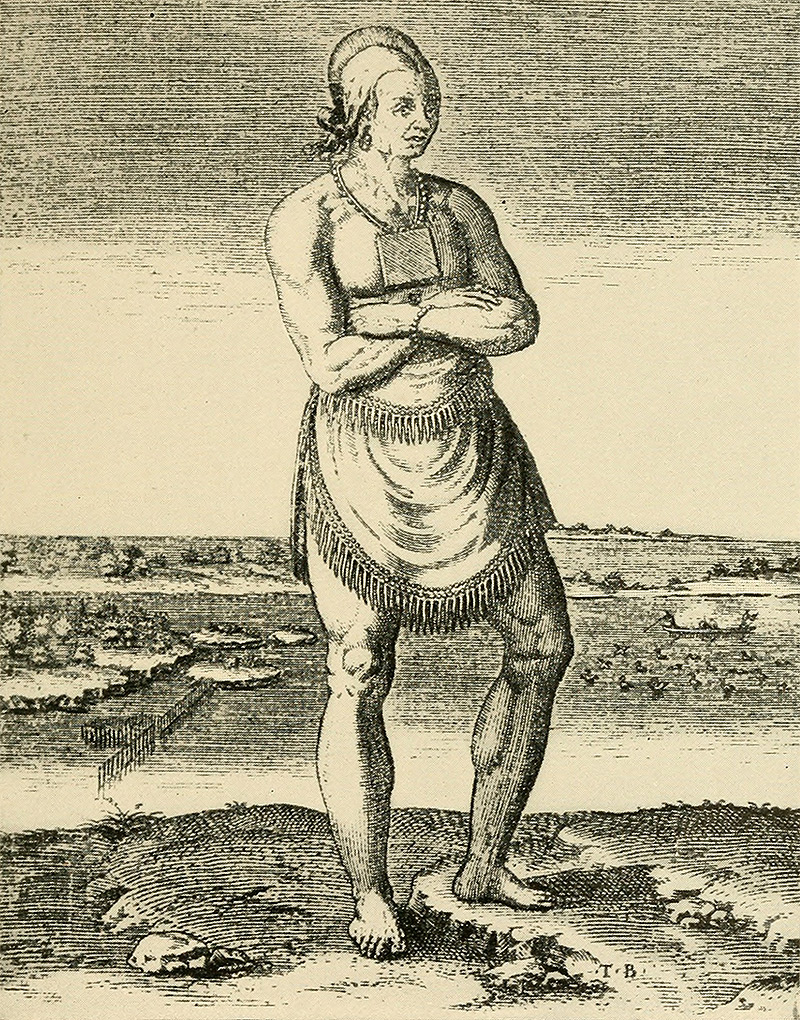 Manteo, chief of the Croatan tribe who twice traveled to England (1584 and 1585) and in 1587 became the first Native American to be baptized into the Church of England

They discovered the bones of men left previously to maintain the claim to the island. When the colonists and Manteo failed in an attempt to strike a treaty with the Croatans and their native coalition, the colony moved up the Pamlico Sound to Roanoke Island.

“The relationship that Manteo shared with the English serves as an early example of positive racial and cultural relations in North America . . . [he] was a trusted friend, teacher, and guide to the English settlers, while remaining loyal to his native people.”

He was also the first known native to become a Christian. The town of Manteo, North Carolina is named after him.

On August 18, Governor White’s daughter, Eleanor Dare gave birth to her first child whom she named Virginia, the first English baby born in the New World. The Governor, however, realized the colony faced a very difficult future without more colonists and food. He reluctantly agreed to return with the fleet to England and bring back a relief expedition. Soon after the harrowing return voyage (the Atlantic is the most dangerous ocean in the world, and hundreds, perhaps thousands, of ships lie at the bottom of it), the Spanish Armada set sail to defeat England and restore the island nation to Roman Catholicism and Spanish domination. White did not get permission to return to Roanoke until 1590! 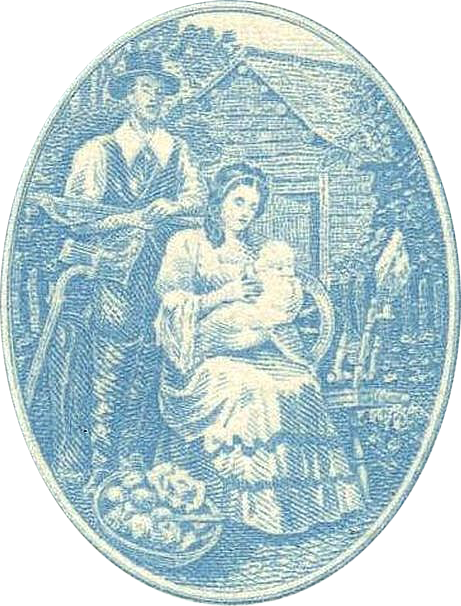 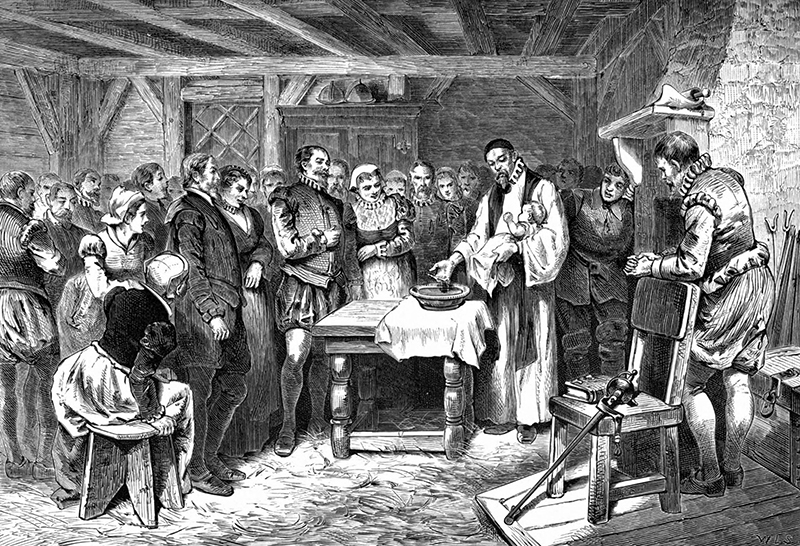 The baptism of Virginia Dare, the first English child born in North America

They made landfall at Roanoke Island on the third birthday of Virginia Dare, but she was not there to greet them. No one was. The colony had disappeared altogether. The only sign that they had existed were the letters CRO carved on a tree. They later found the word CROATOAN carved on the palisade that had been built for defense. No trace of the colony has ever been decisively found. Rumors abounded over the years of a massacre, of English people being taken inland by other tribes, of blond-haired blue-eyed natives fifty years after, in western Carolina. 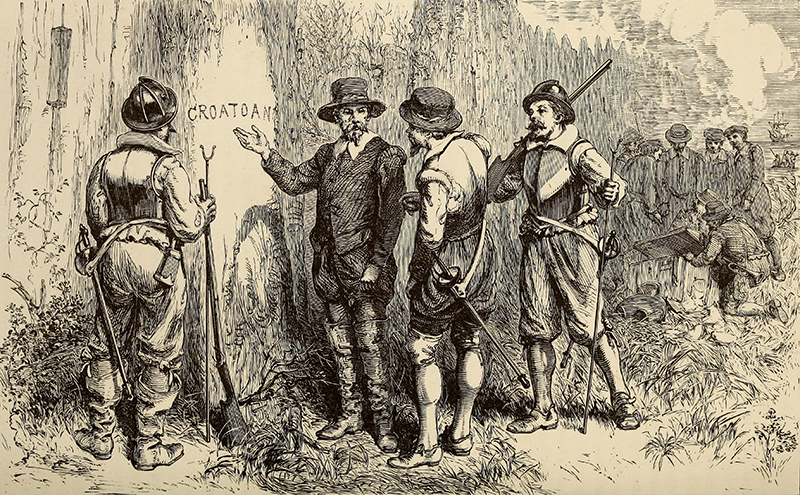 Upon their return to Roanoke Colony in 1590, Governor John White and his men discovered the word CROATOAN inscribed on the palisade, but no trace of the colonists

The solution to the mystery of the disappearance of the Roanoke colony is: no one knows but God. Seventeen years later the first permanent English colony would be founded at Jamestown, Virginia. But that is another story, about which a great deal is known.