xplorer, frontiersman, professional hunter, Indian fighter, surveyor, merchant, land speculator, hero, and legend, Daniel Boone strode the stage of American history with few peers, numerous enemies, and headlines that made him famous in his own times. Seeking “elbow room” on the frontier with his longsuffering wife, their ten children, and eight children of deceased relatives, Boone became the epitome of the self-made pioneer of the American dream and the tip of the spear of Manifest Destiny. 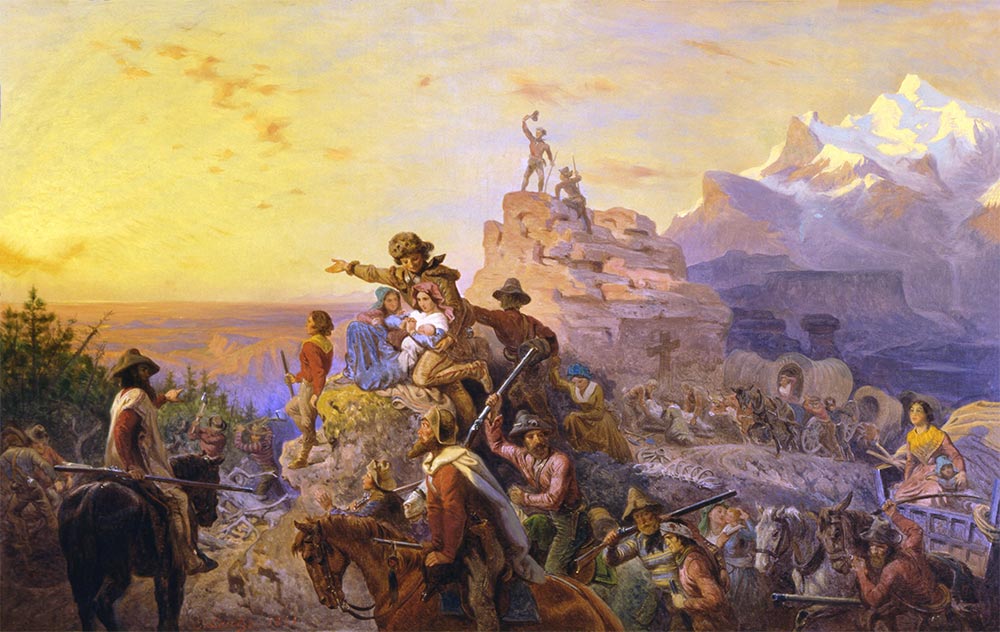 In Emanuel Leutze’s painting Westward the Course of Empire Takes Its Way, America’s westward expansion is idealized, capturing the spirit of Manifest Destiny where many were convinced that Americans were destined to spread across the continent

The sixth of eleven children of first-generation persecuted Quakers who came to Pennsylvania from England (father) and Wales (mother), Daniel lived in a one-room log cabin with his siblings on the cusp of civilization, still in contact with Indians. He became a crack shot by his teens, with little formal education (“let the girls do the spelling and let Dan do the shooting”). After Dan”s two oldest siblings married outside the Quaker communion, his father was expelled from the church, and soon moved his tribe to North Carolina—a stepping stone to the burgeoning American frontier in the South. 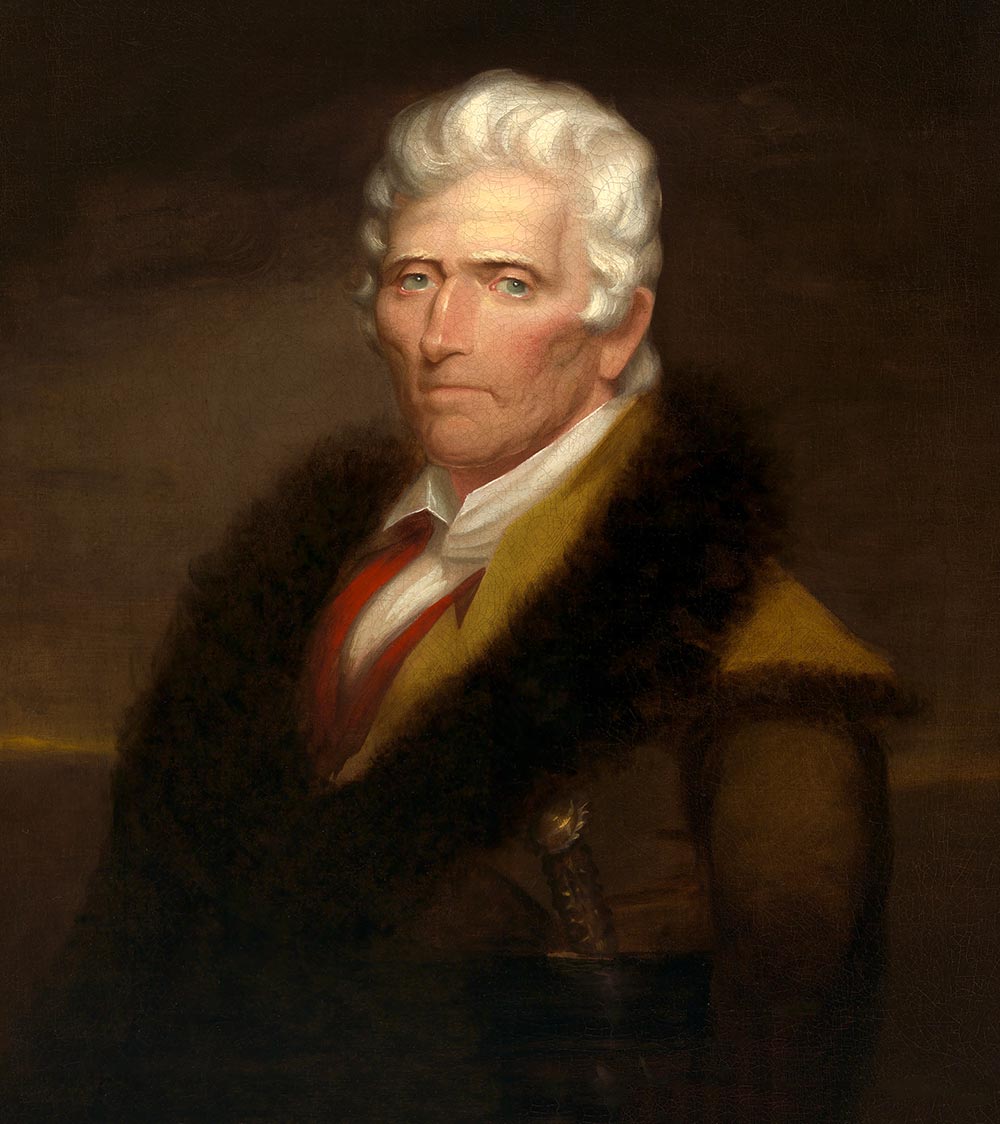 Daniel Boone”s first war-time experience occurred as a twenty-year-old waggoner in the ill-fated Braddock expedition along the Monongahela River at the beginning of the French and Indian War in 1755. The following year he married Rebecca Bryan, a girl from a neighboring farm in the Yadkin Valley. He saw action with the local militia in the “Cherokee Uprising” in 1758. Boone supported his growing family through hunting, trapping, and the fur trade, making long treks into the wilderness of western Carolina and into Kentucky in 1767. Ever a debtor, Boone paid some of his creditors by selling off parcels of his land and moving further westward into the Yadkin Valley. 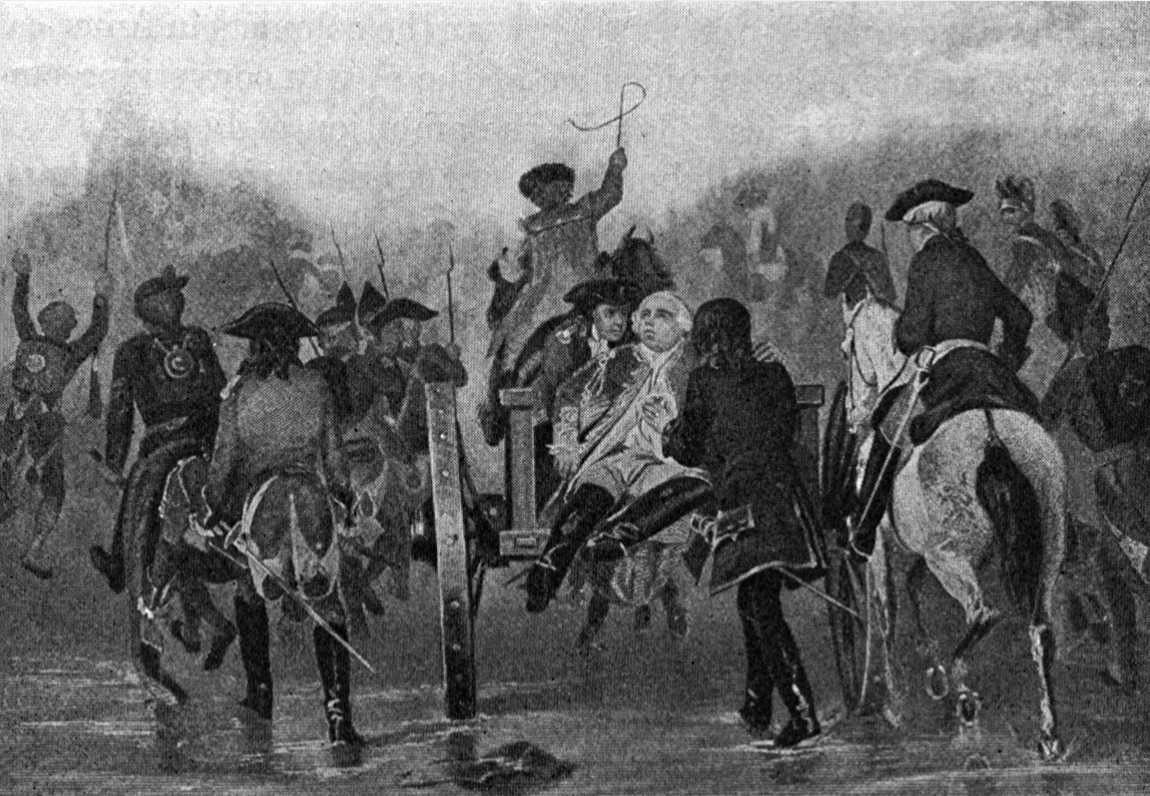 Braddock’s Expedition in 1755 was a failed attempt by British military forces to capture the French Fort Duquesne (now Downtown Pittsburgh) during the French and Indian War. The expedition was eventually defeated at the Battle of the Monongahela on July 9. The image above depicts the retreat of the mortally wounded Major-General Braddock and his troops.

He “resigned my domestic happiness,” and left home for a two-year hunting trip with five companions in 1769 “to wander through the wilderness,” thoroughly exploring Kentucky. Captured by a hunting party of the Shawnee who stole all his pelts, Boone was told that the Ohio-based tribe claimed Kentucky as their own hunting grounds, and to leave, never to return. He continued to explore and hunt in Kentucky over the next several years, packing up his family in 1773 and building a settlement with fifty other Carolina frontiersmen and their families. 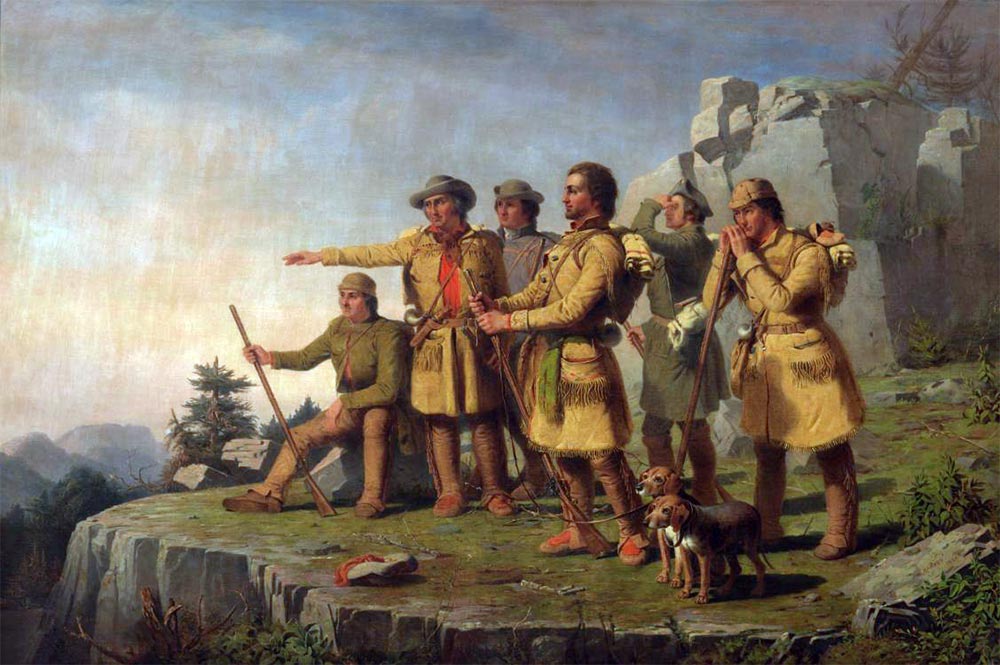 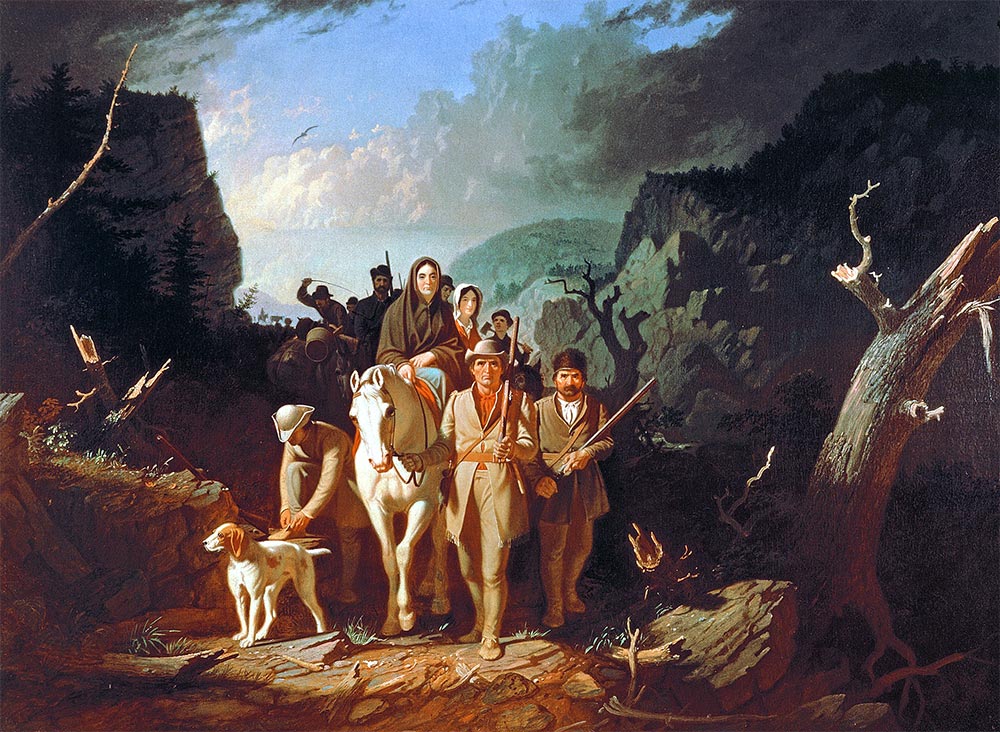 Three Indian tribes colluded to drive the interlopers out of Kentucky, killing Daniel”s brother and several others of the immigrants. The rest fled back to Carolina. After the conclusion of the war that ensued (Lord Dunmore’s War), the Shawnee abandoned Kentucky by treaty and Boone forged a new trail through the Cumberland Gap, later known as “The Wilderness Road” into central Kentucky, and founded Boonesborough on the Kentucky River. 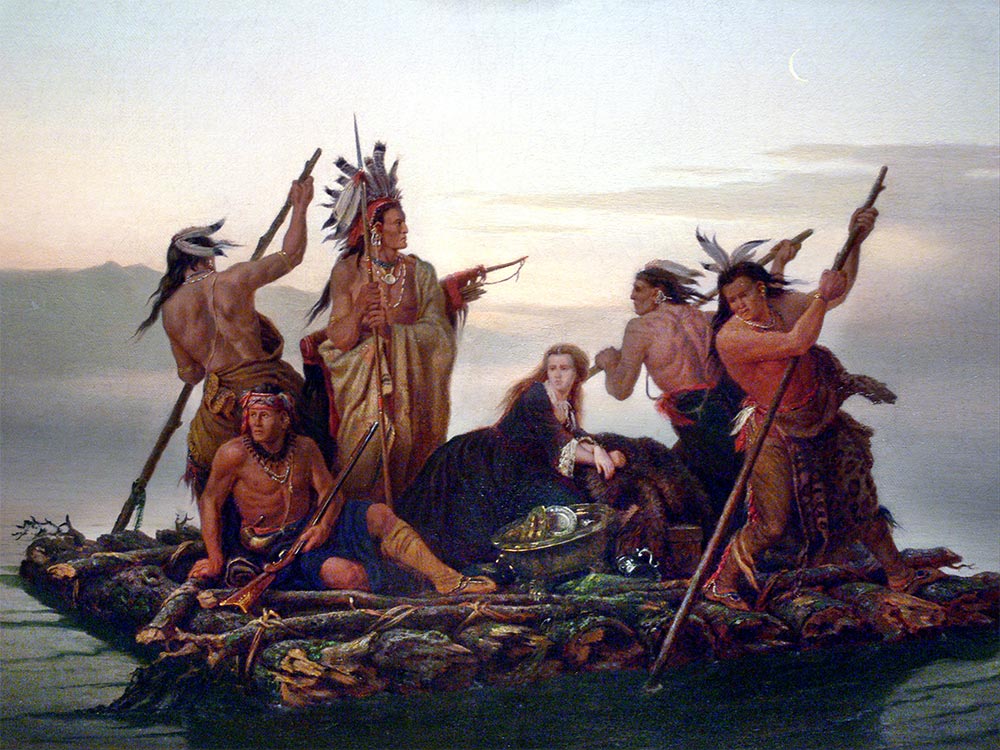 With the coming of the War for American Independence, the fighting in Kentucky heated up again, resulting in many white hunters and settlers returning to the states. The Boones, however, remained. The Shawnee captured three girls, including Daniel’s daughter Jemima. He chased the natives all the way to Ohio and rescued the girls, perhaps the most daring and renowned action of Daniel Boone”s adventuresome life. British officials in Canada unleashed the Shawnee on Kentucky again and wounded Boone in an attack on Boonesborough. He was saved by another frontiersman of note, Simon Kenton. 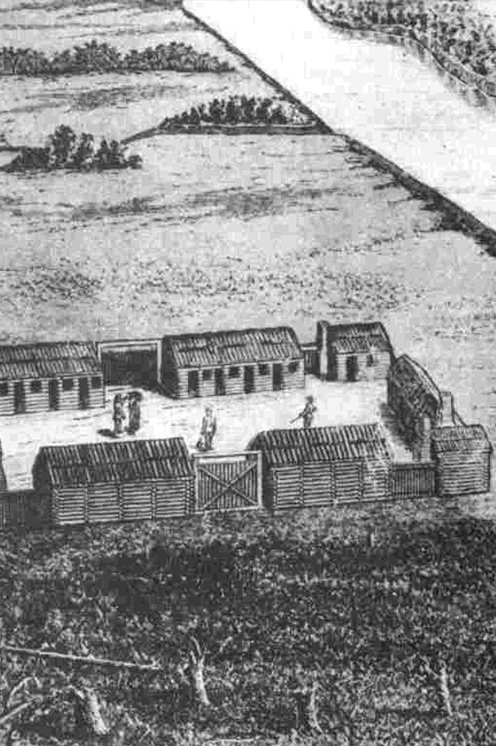 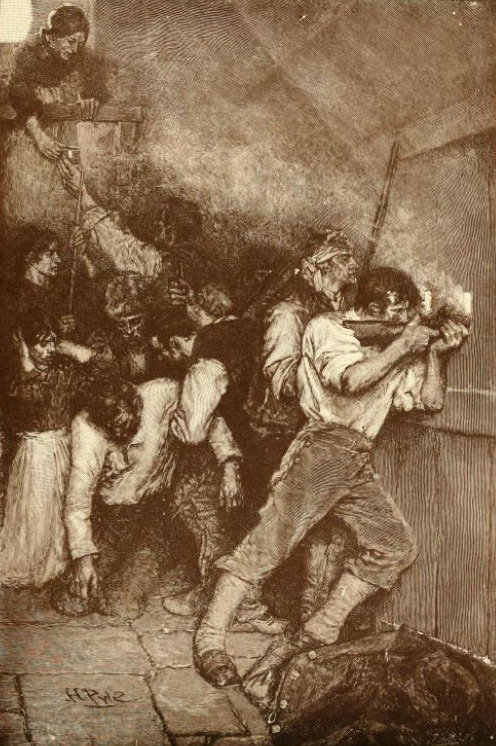 Boone was later captured again by the Shawnees while making salt for the colony. He was taken to their capitol at Chillicothe in Ohio and made to run the gauntlet, an incident recorded on a historical marker just outside the city of Xenia today. He was adopted into an Indian family and renamed “Big Turtle.” Daniel eventually escaped, returned to North Carolina to retrieve his family and returned to Kentucky where he continued the war against the Indian allies of the British, serving as a Lieutenant Colonel of militia. He had become so respected and famous for his exploits, Boone was elected to a term in the Virginia General Assembly in 1791. 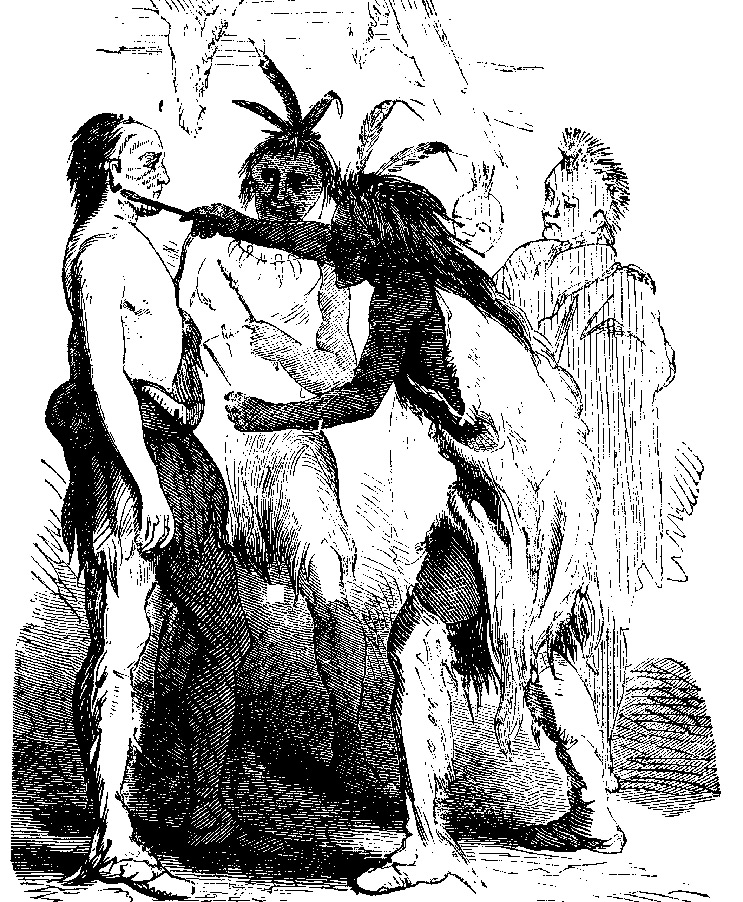 Boone’s ritual adoption by the Shawnees

In the last year of the century, Boone moved his extended family to St. Charles, Missouri where he lived out the last twenty years of his life. A book recounting the history of the settlement of Kentucky made Daniel Boone a national celebrity. While other frontiersmen accomplished similar feats and were just as colorful and tough, the eastern press latched onto Daniel as the quintessential American frontiersman. Many myths and stories relating to his exploits burnished his reputation, and some of his more questionable activities and problems fell between the cracks of history.

Daniel Boone died on September 26, 1820, age 86 at the home of his son in Missouri. There is still contention over whether he is buried in Missouri or Kentucky. There are dozens of places named after Daniel Boone, as well as songs, television programs, documentaries, and books. For those who were raised on the tales of Daniel Boone and the Disney portrayals, Old Dan was relatively short, unlike the actors that have portrayed him, and did not like coonskin hats, he found them too itchy and “uncouth.” 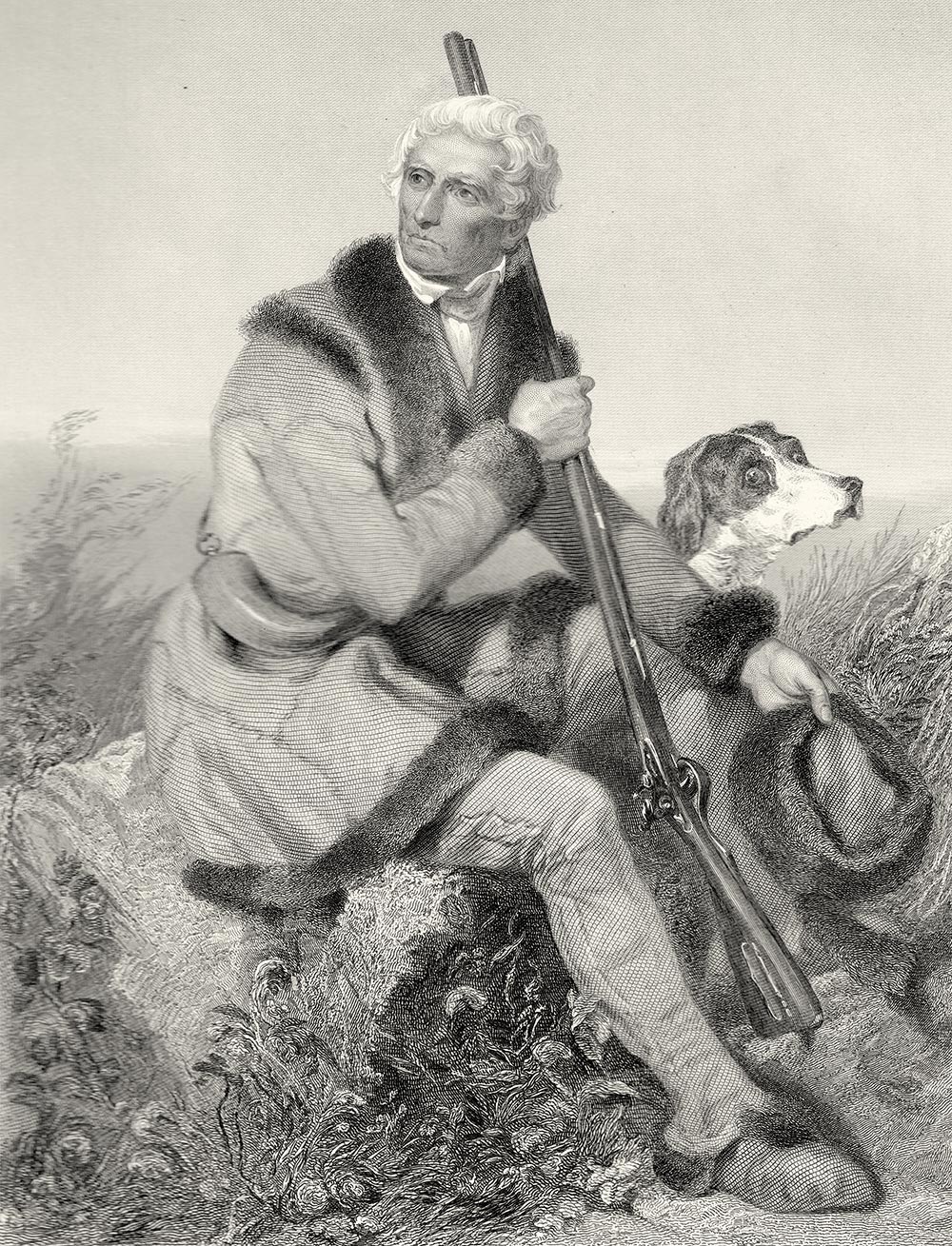 An engraving by Alonzo Chappel (c. 1861) depicts an elderly Boone hunting in Missouri