The Death of Filmmaker Leni Riefenstahl, 2003

“Whatsoever the LORD please, that did he in heaven, and in earth, in the seas, and all deep places.” —Psalm 135:6

n the 20th Century, the impact of filmmaking became as important, or more important in recent years, than the printed word. The development of movie-making and the entertainment industry can rightly be termed revolutionary in guiding how people use their leisure hours, how they think, behave, and understand the past and present. Film has been used by governments to manipulate and guide the thoughts of their populations—it has proven one of the most effective propaganda tools of all time. Most of the Hollywoodization of the world has been developed by men, but not altogether. An elegant German female filmmaker in the 1920s and 30s could likely boast that she was the most influential female film director, photographer and actress in the 20th Century—Helene Bertha Amalie “Leni” Riefenstahl (1902-2003). 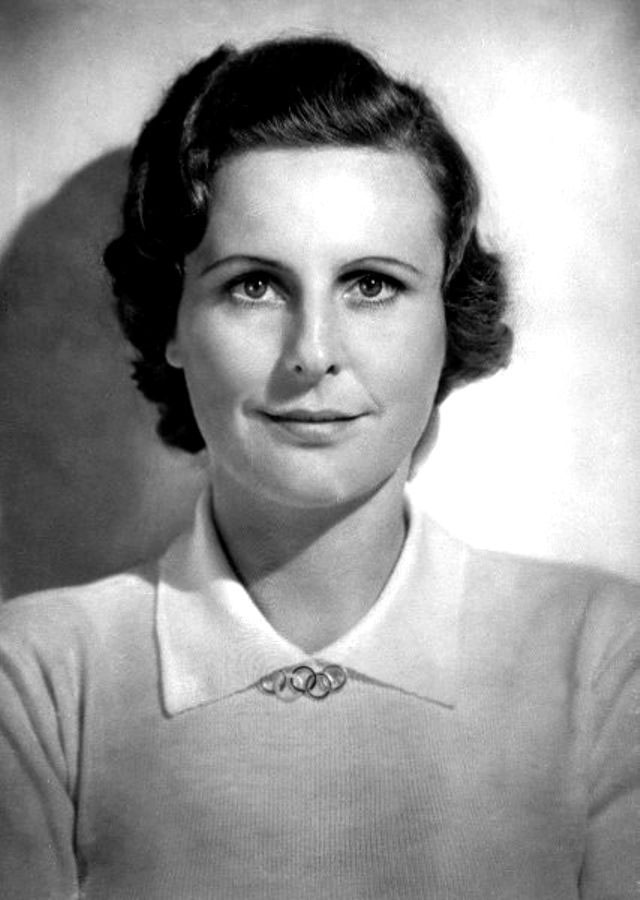 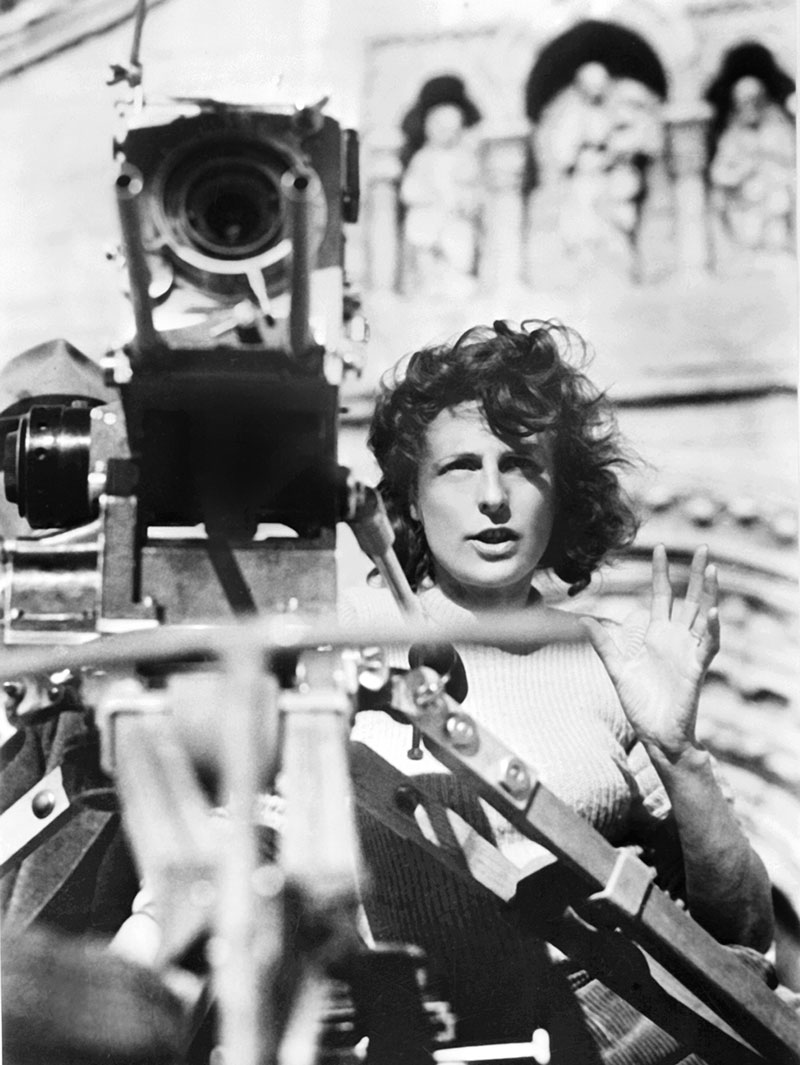 Leni behind the camera in 1940

Born in Berlin to a successful businessman, Leni resisted her father’s plan for her to take over his business interests when she reached her majority. Leni “fell in love” with the arts and athletics at an early age and was encouraged and supported by her mother, who seems to have recognized her “motivated abilities” and desires for the entertainment world. At sixteen, Leni—already a proficient gymnast and swimmer—determined to learn dance, and her mother surreptitiously paid for lessons with a well-regarded studio in Berlin, where she became a star pupil.

In the heady days of avant-garde theatrics and improvisational entertainments following the disastrous First World War, Riefenstahl became a headline performer. Foot and knee injuries curbed her enthusiasm for dance and she began attending movie theatres, sparking a powerful interest in film. Upon meeting a famous actor and a director, Leni persuaded them to try her for a part in an upcoming film. Upon appearing in several films, she came to the attention of the cinema world outside Germany, and was invited to Hollywood, an invitation she rejected. As an actress, she studied the art of filmography and direction. One of her fan-boys was the up-and-coming leader of the National Socialist Party, Adolph Hitler, who claimed that Leni Riefenstahl was the perfect model of Aryan womanhood, and arranged to meet her. 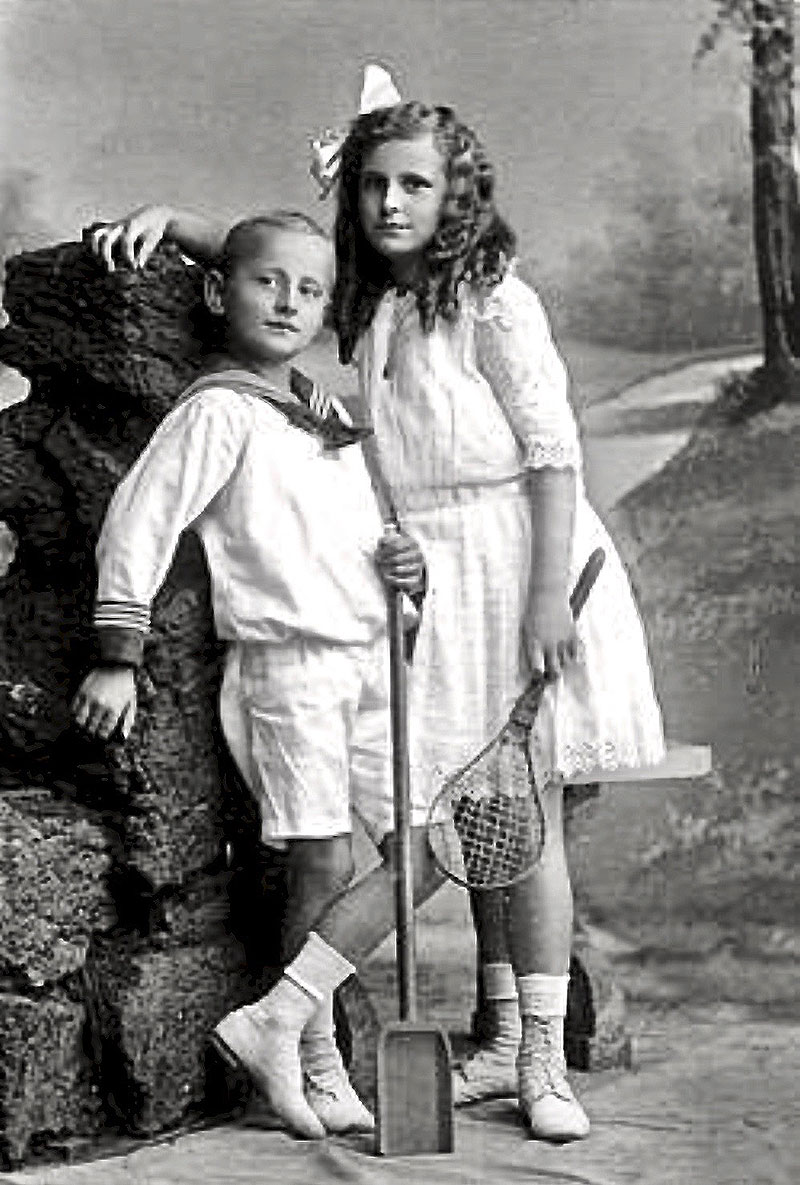 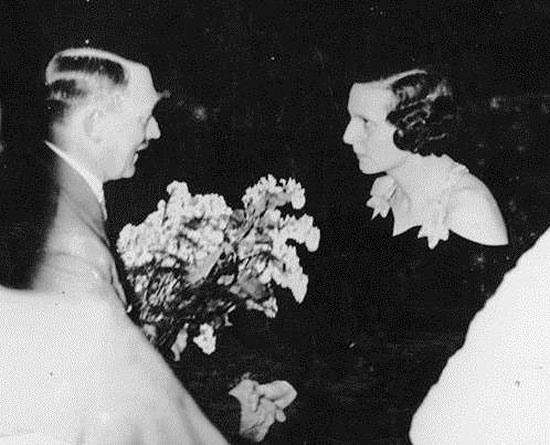 After performing in two joint German and American films, both of them successes, Hitler contacted Riefenstahl again with a directorial offer. Riefenstahl attended several National Socialist (Nazi) Party rallies and was mesmerized by Hitler’s powerful rhetorical style. Through Joseph Goebbels, Minister of Propaganda, Riefenstahl received funding to make a one-hour film of the Nuremberg Rally of 1933, titled “The Victory of Faith” (Der Sieg des Glaubens). 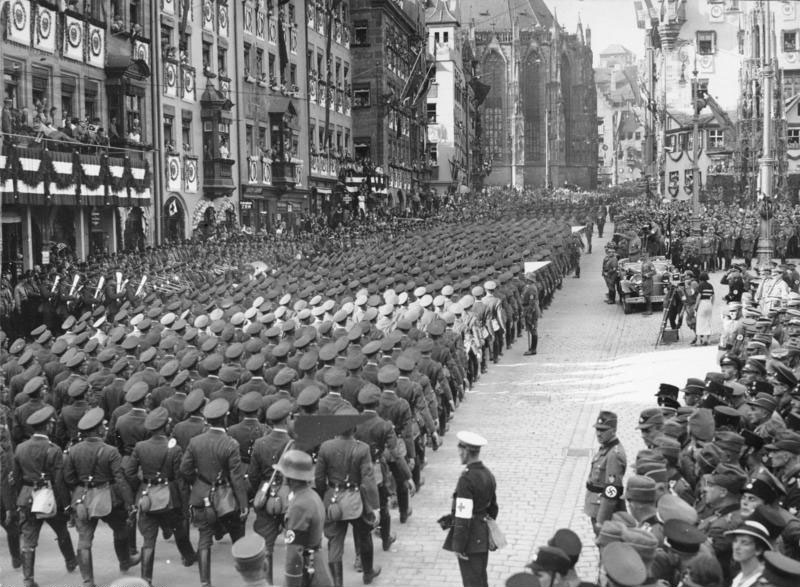 Hitler liked the results and conceived a plan for a major picture based on the same rally, the following year. Riefenstahl and Hitler’s friendly relationship resulted in her most powerful work Triumph des Willens, “Triumph of the Will.” More than a million people attended the Nazi rally and Riefenstahl captured it all—the hundreds of red and black flags, the marching cadences, the music, the sharp uniforms, the adoring crowds, and, of course, the stem-winding nationalistic speech by the Fuhrer himself. Not a few historians consider the film the most successful and grandest propaganda film in history. It sold the Nazi brand to the world. It gave Riefenstahl international status reserved for the very few. 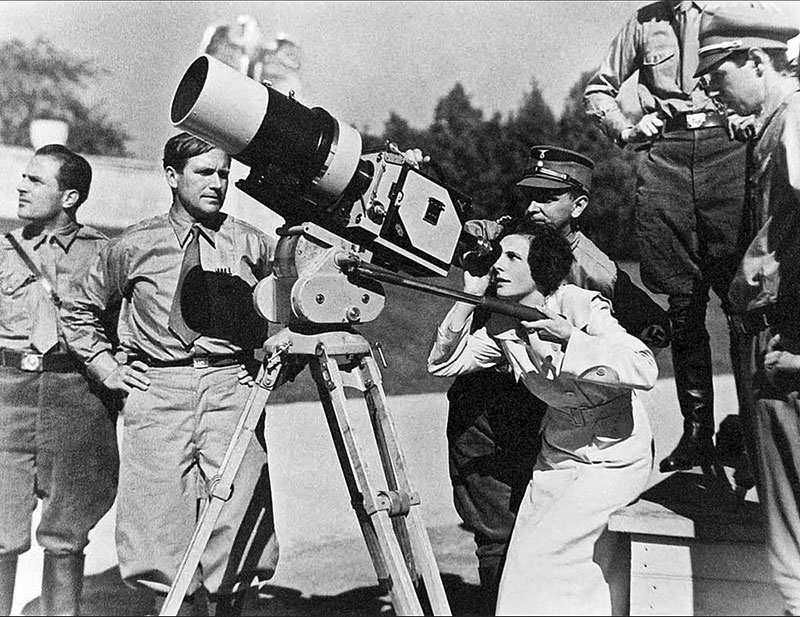 Riefenstahl behind the camera while filming Triumph of the Will

In 1935 she made a twenty-eight-minute film on the German Army, who believed she had short-changed them in Triumph of the Will. The propaganda value boosted their morale and helped bring in new recruits. Hitler invited Leni to film the 1936 Olympic Games in Berlin, where he hoped that his Aryan super-men and women would dominate the world in athletics. Her film Olympia became an international smash hit, and, although Germany won the most medals, the film included American sprinter and long-jumper Jesse Owen, winning four gold medals. Although the Olympic Committee commissioned Riefenstahl to make the film, it was secretly paid for by The Third Reich. 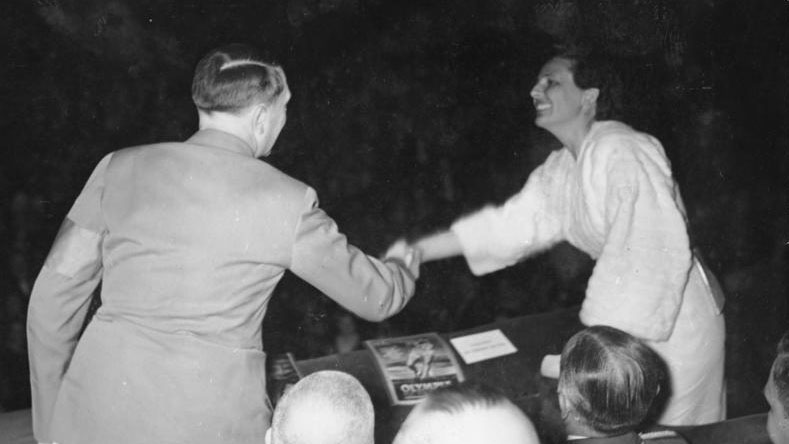 Riefenstahl receiving congratulations from Adolph Hitler at a showing of her film, Olympia, documenting the 1936 Berlin Olympic Games

Riefenstahl embarked on a grand publicity tour of the United States, and in an interview with the Detroit Free Press stated that “Hitler is the greatest man who ever lived.” She negotiated with Louis B. Mayer, the Hollywood impresario, was wined and dined by Henry Ford, an admirer of Hitler also, and given a tour of the studios by Walt Disney. 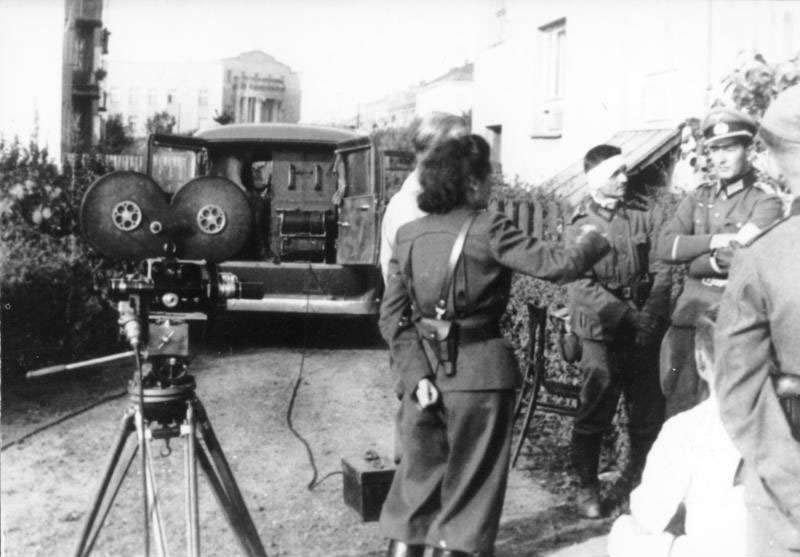 Riefenstahl in uniform and wearing a pistol, speaking with Nazi troops during their campaign in Poland, September 1939

Leni was on hand when the German army marched into Poland on September 1, 1939, dressed in a uniform and carrying a pistol. She witnessed the execution of Polish civilians and later claimed she was shocked, appalled and threatened when she tried to intervene. She filmed Hitler’s triumphal motorcade in Warsaw, the last Nazi film she ever made, though she tried to shoot other films during the war years but unrelated to politics. 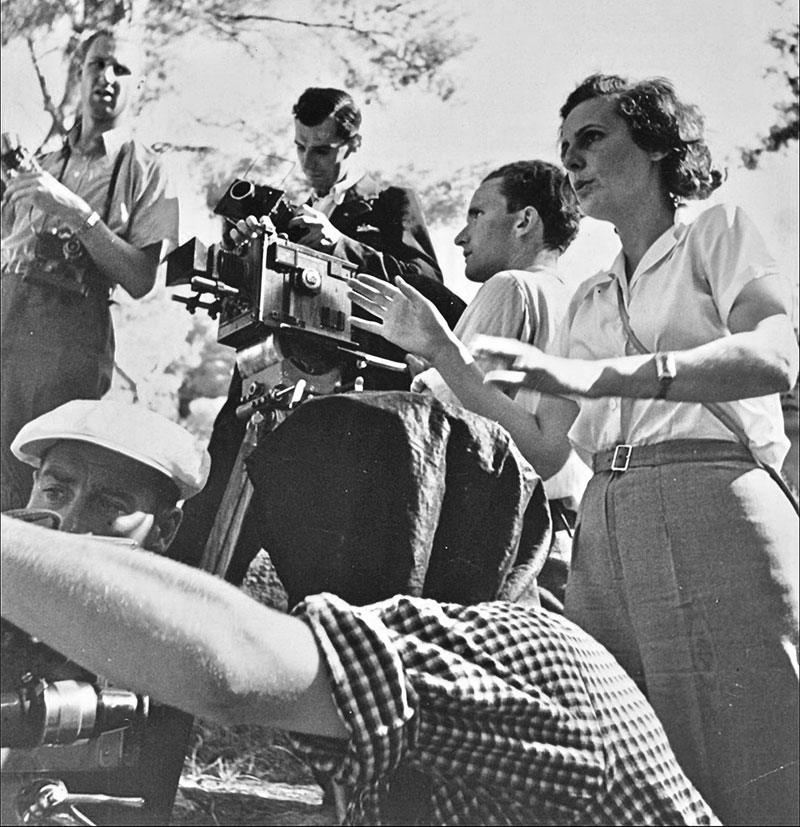 Riefenstahl directing the filming of Olympia, 1936

In the immediate post-war era, Leni Riefenstahl was arrested and escaped a number of times from the Allies, and was finally tried in court for her cinematic pro-Nazi films, and released. She published several books of photographs taken in Africa in the 1970s, filmed the 1972 Olympic Games in Munich, along with several film collections of entertainment celebrities. She died in 2003 at the age of 101, recognized for her innovative film techniques and for producing what became a cinematic historical record of great influence in its day. 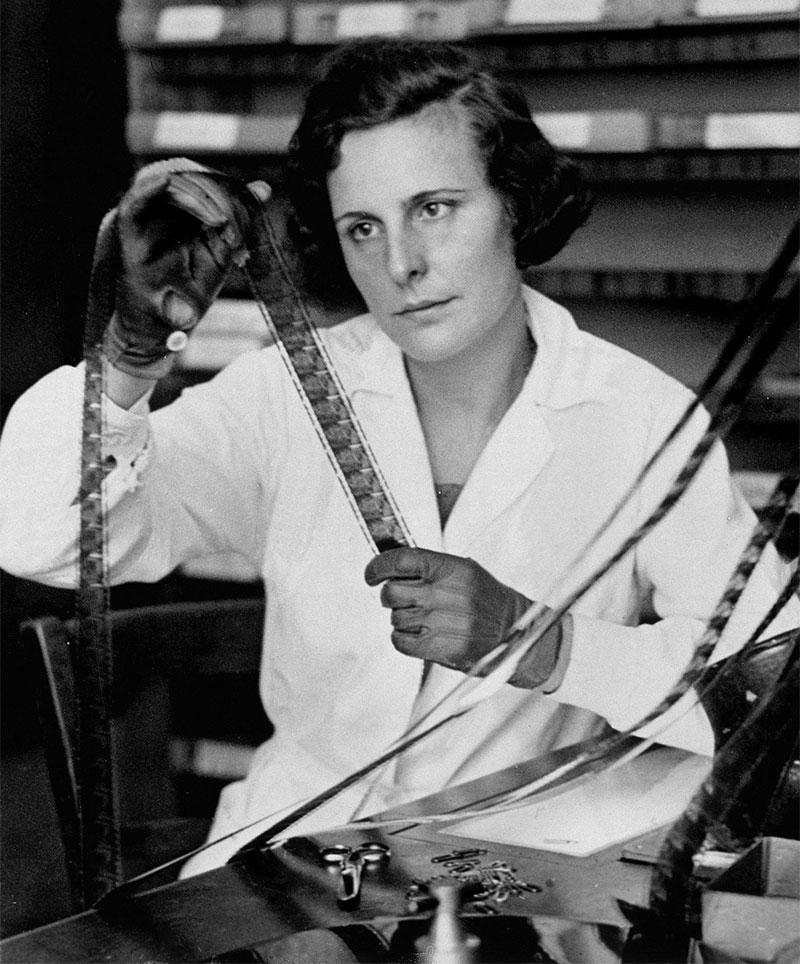 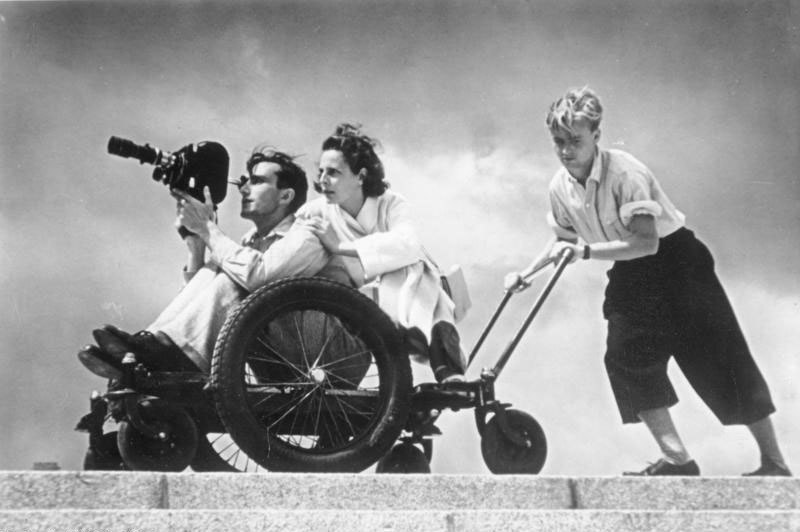 Riefenstahl with a cameraman and assistant, pioneering new and unique filming techniques, such as track shots, that would become standards of cinematography