“Behold, the nations are as a drop of a bucket, and are counted as the small dust of the balance: behold, he taketh up the isles as a very little thing.” —Isaiah 40:15

ew battles in history had larger repercussions than the Siege of Yorktown, Virginia, concluded on October 19, 1781. An army, representing thirteen rebellious colonies of Great Britain and led by General George Washington, trapped and forced to surrender a tired and bloodied professional English army, led by an experienced and undefeated officer of the Empire, Major General Lord Charles Cornwallis. Allied to the American colonial forces, both militia and regulars, was a professional army of French infantry and a naval task force which together, providentially, tipped the scales in favor of Washington’s cause. 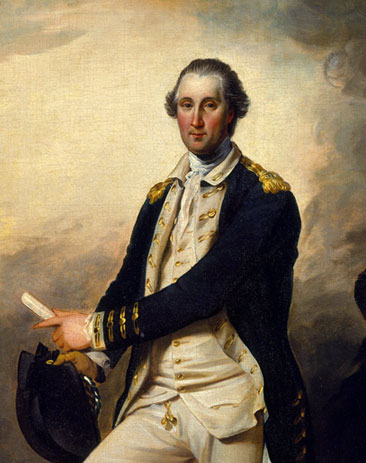 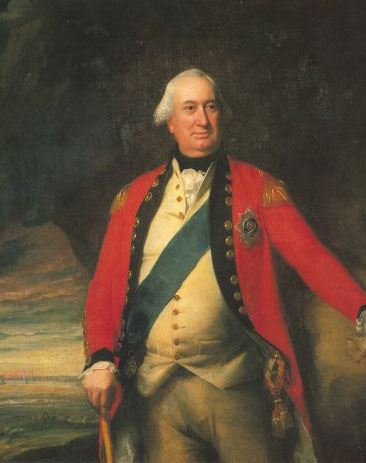 The war raged on and off for six years before they met at Yorktown, then continued in desultory fashion for two more years. American forces had suffered defeats in New York, Pennsylvania, New Jersey, Maryland, Virginia, the Carolinas, and Georgia, often staving off total destruction, and winning small victories between major losses. An American army had blunted a three-pronged invasion and defeated and captured another English army at Saratoga, New York in 1777, but had subsequently suffered regular defeats in the southern colonies. The fledgling American Navy had won a number of confrontations on the high seas, but England still ruled the oceans and shipping lanes. 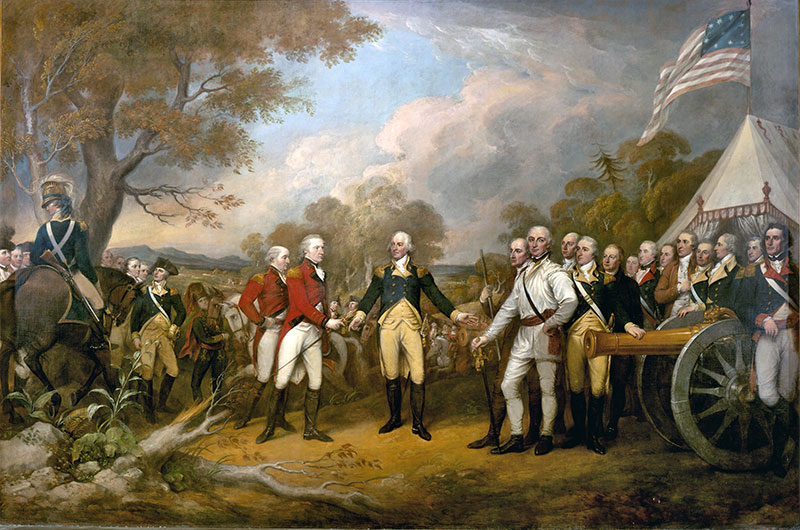 Throughout the year of 1781, General Washington’s army held a position along the Hudson River, with the British Army occupying New York City, under the command of General William Howe. The French settled in at Newport, Rhode Island, awaiting military developments. In North Carolina, Lord Cornwallis pursued the Americans under Nathanael Greene, seeking revenge for the destruction of British forces at Cowpens and King’s Mountain, and to finally drive the American army out of the Carolinas. On March 15, 1781 Lord Cornwallis caught up to Nathanael Greene’s American army at Guilford Court House in North Carolina. 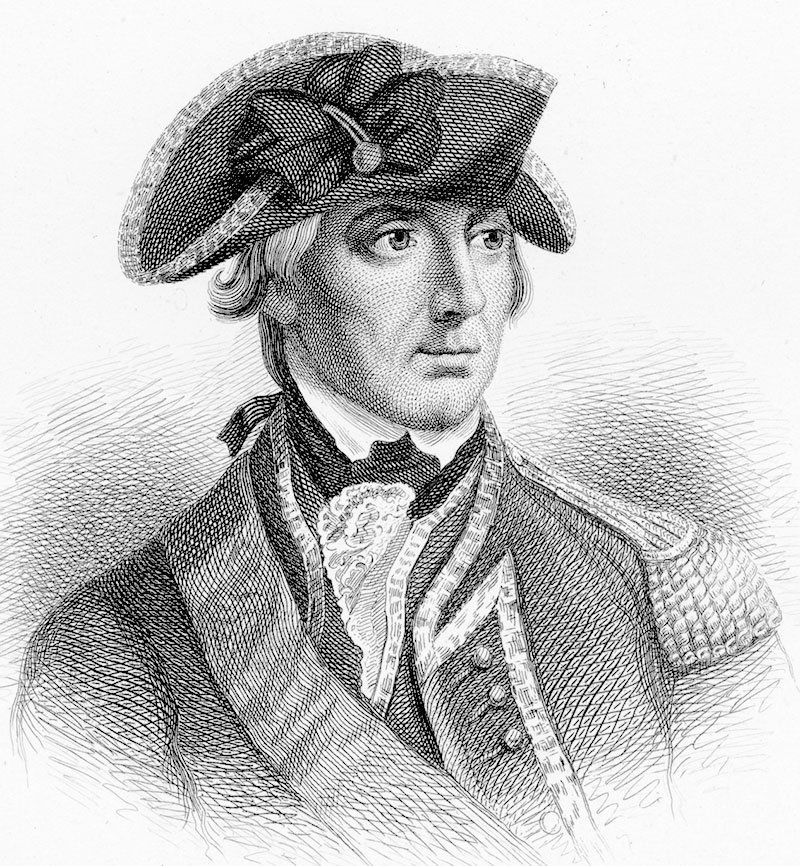 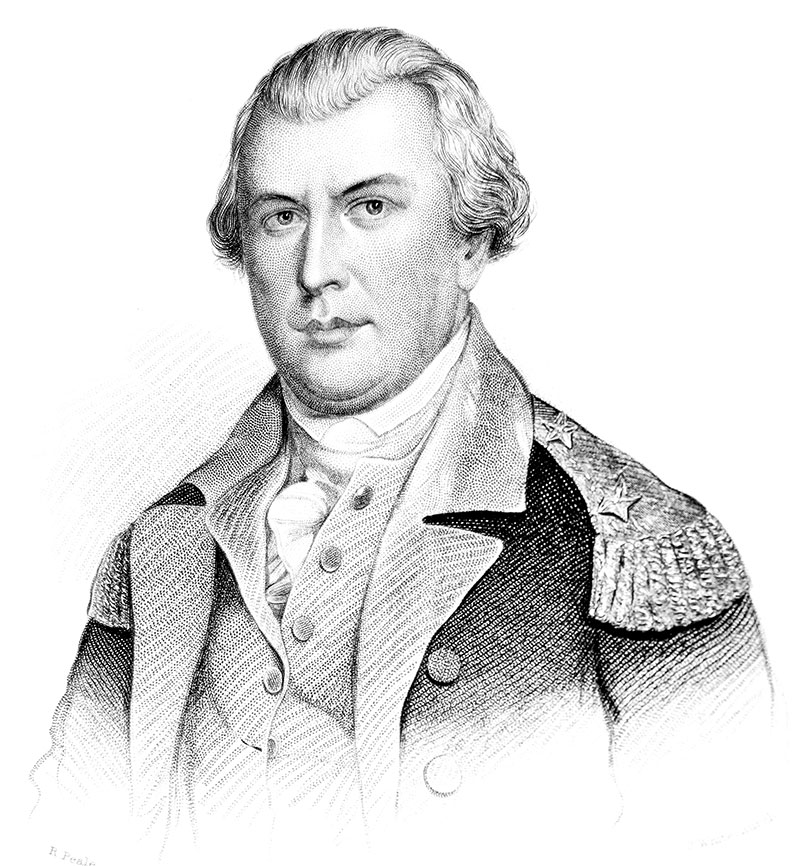 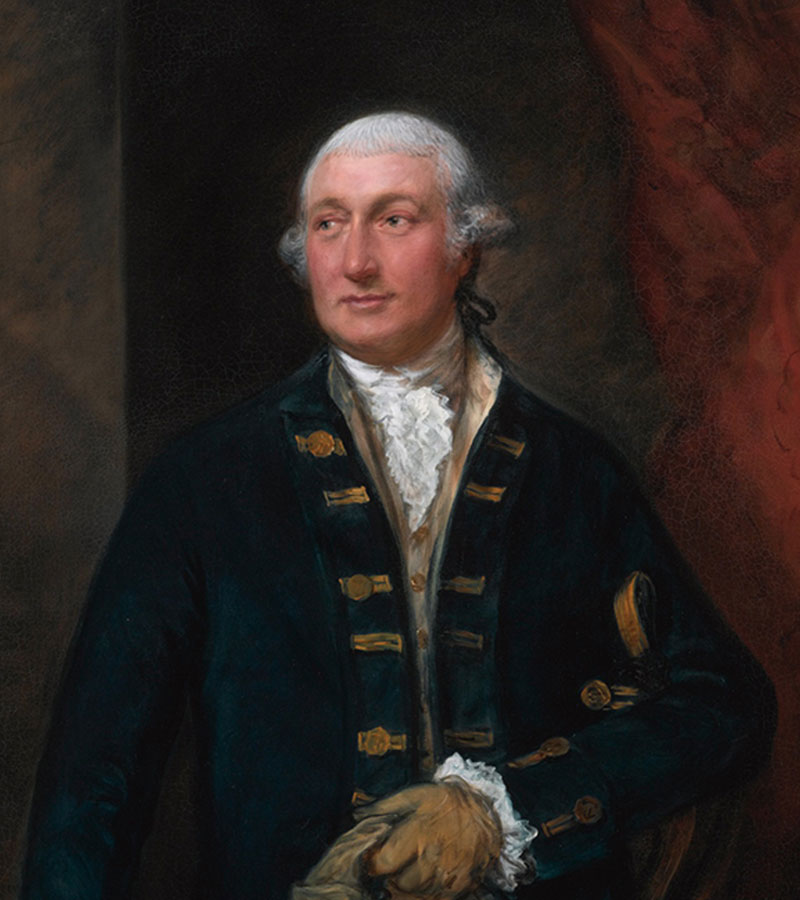 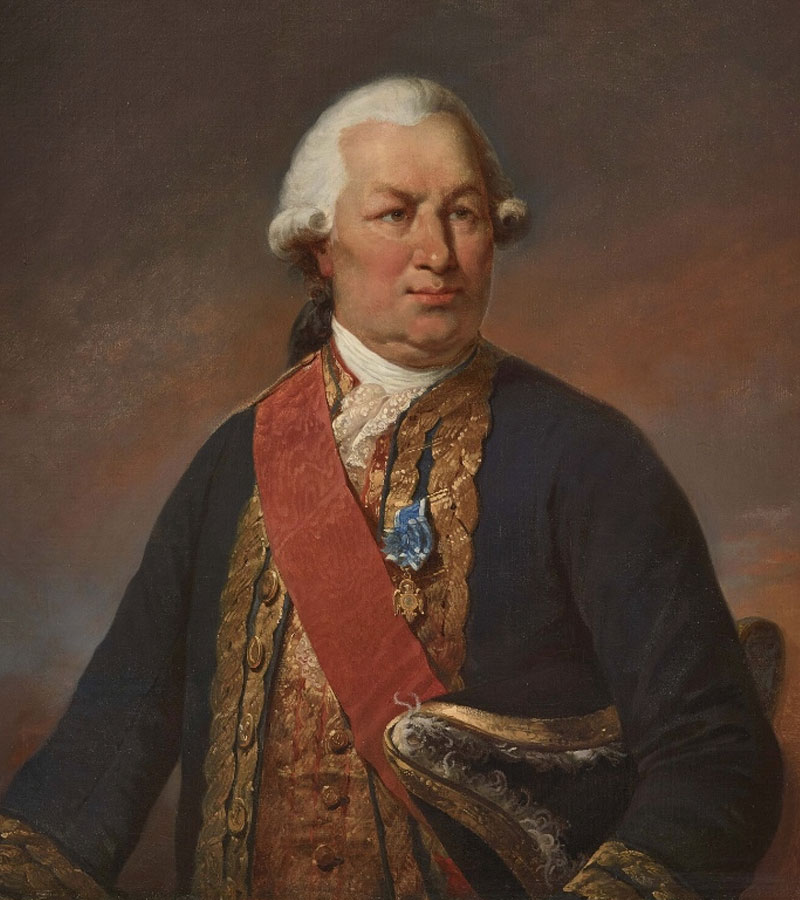 That fierce battle left the British holding the field, but at huge cost in lives and wounded. Cornwallis had to send his wounded to eastern North Carolina for treatment and marched the bedraggled remnant to Yorktown, Virginia for refitting and resupply from the sea. Man proposes, but God disposes. The British relief fleet met the French fleet off the Virginia Capes on September 5. Rear Admiral Thomas Graves intended to sail up the York River from the mouth of Chesapeake Bay, but French Lt. General de Grasse and twenty-eight ships of the line got there first, after a series of providential blunders and untimely decisions by the English commanders. In a short-range, broadside exchange that lasted from 5pm to sunset, the two sides pounded each other until the British squadron drew off and headed for New York, leaving Lord Cornwallis and his army isolated at Yorktown. 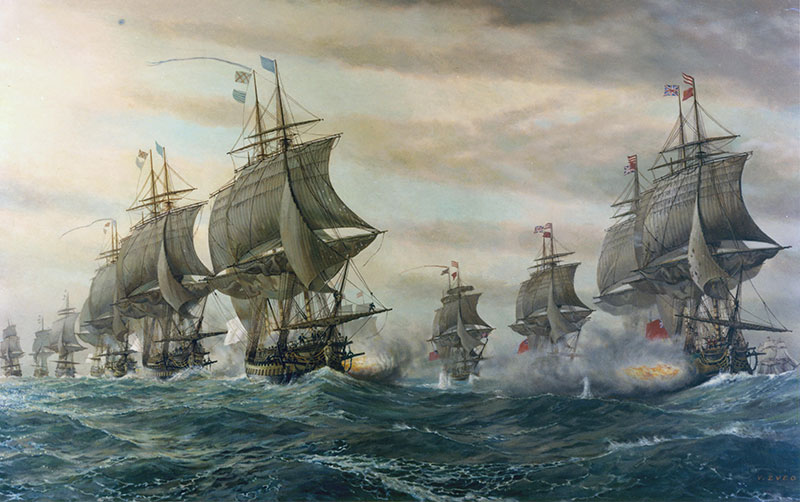 George Washington had slipped away from the warfront in New York after combining his army with the French reinforcements under General Comte de Rochambeau, giving him a total of more than 15,000 men. After several secret spy operations and mis-directions to fool the English high command in New York City, the allied force marched three hundred ninety miles and laid siege to Cornwallis’s more than 7,000 soldiers at Yorktown. The British had the York River barrier at their backs and classic siege works in their front, surrounded by two veteran armies, well supplied and determined. The siege lasted from September 28 to October 19—three weeks of bombardment, digging trenches, sorties, and finally a gallant rush and capture of the two most strategic British flanking forts defending the town (Redoubts 9 and 10). When Cornwallis tried to move his men across the river, a squall suddenly came up and blew the boats back to shore, the second time in the war that Washington was favored by the wind on the water. 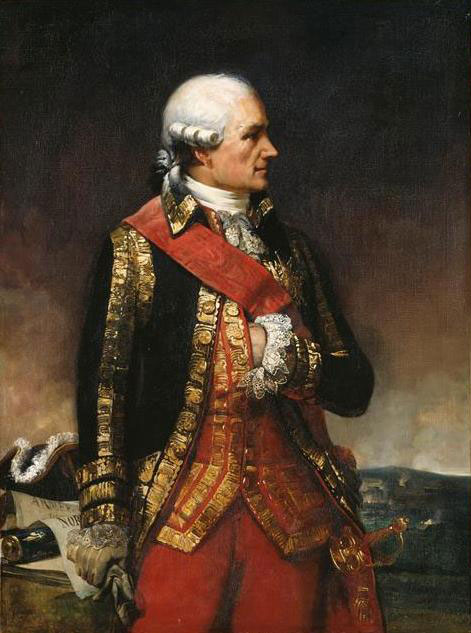 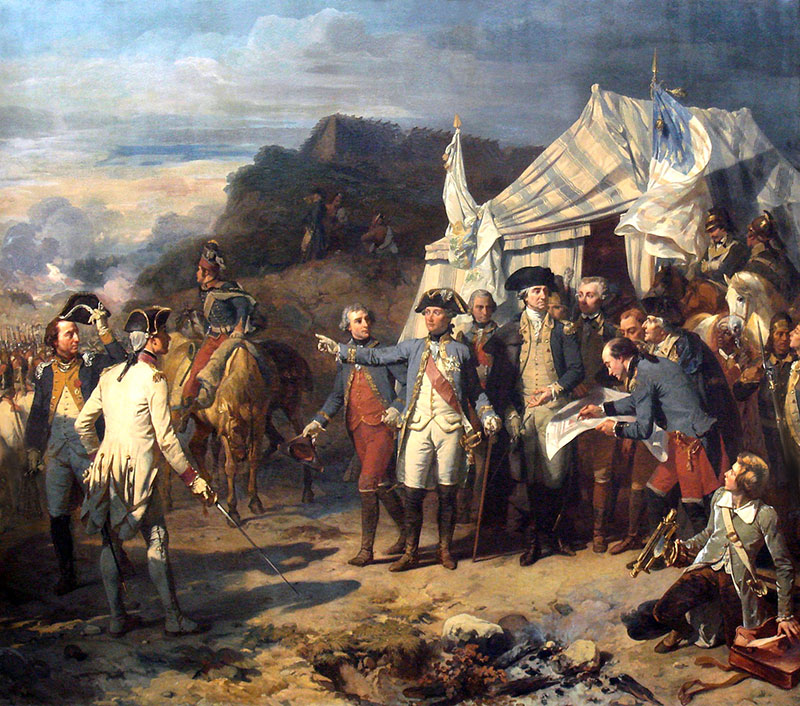 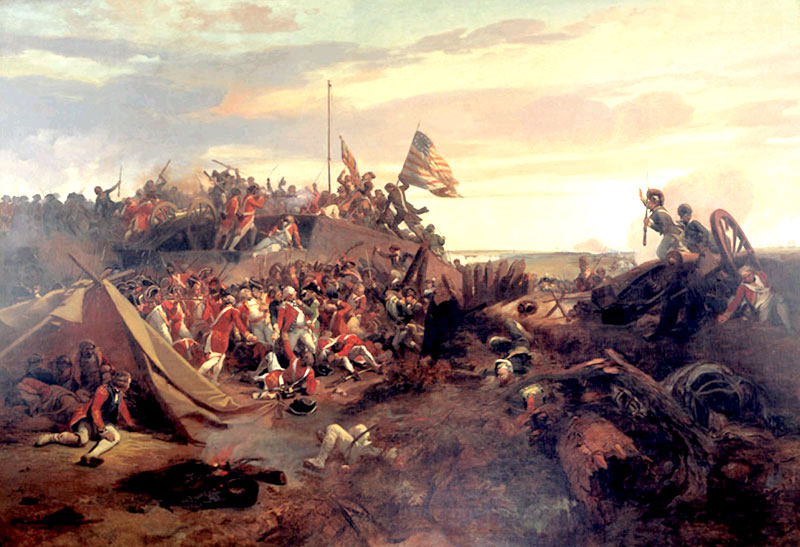 American storming of Redoubt 10 during the Siege of Yorktown

Realizing the hopelessness of his situation, Cornwallis raised the white flag and had the drummers beat the parley.

General Washington offered generous terms regarding prisoners, but forbade flying the British colors or the bands playing tribute to the victors, in response to similar treatment suffered by the Americans at the surrender of Charleston, South Carolina several years earlier. General Washington also directed the red-coat second in command to surrender to Benjamin Lincoln, his second in command, since Cornwallis was indisposed to attend the ceremony. The American General was a stickler for protocol and respect. 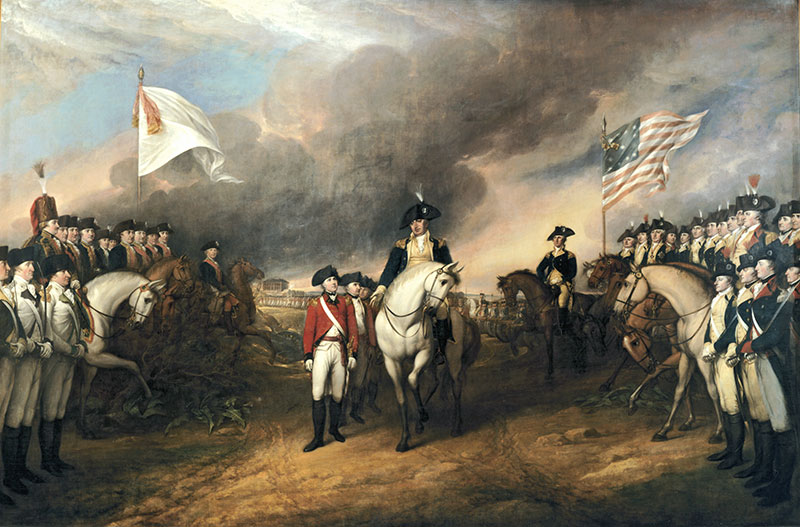 At the loss of less than four hundred casualties, George Washington and the Comte de Rochambeau and the French fleet had humiliated and captured a major British army at a politically sensitive time. The loss brought down the English government and America’s allies in Parliament began negotiation for a final ending of the war, which took place in 1783. For all practical purposes, the Siege of Yorktown put an end to the War for Independence. Now it was up to the politicians to build a Republic, “if they could keep it.”