“For the love of money is the root of all evil: which while some coveted after, they have erred from the faith, and pierced themselves through with many sorrows.” —I Timothy 6:10”

ew engineering projects in American history had such immediate far-reaching effects. Prior to the transcontinental railroad, the cost of travelling from Missouri to California cost about $1,000 and took from four to six months. However, after the completion of the 1,776-mile road, a trip cost between $65.00 and $136.00, and a week or so from New York to San Francisco. Few engineering projects in American history were ever completed with more scams, political corruption and payoffs connected to the project, or killed more workers, than the laying of the track for the trans-continental railroad. The completion of the railroad lines generated tremendous celebration, enthusiasm, and repercussions for financial malfeasance, the last of which would characterize the legacy of the Grant administration, soon to be reelected for a second term. The story has been overshadowed by the “reconstruction” of the Southern states following the War Between the States. 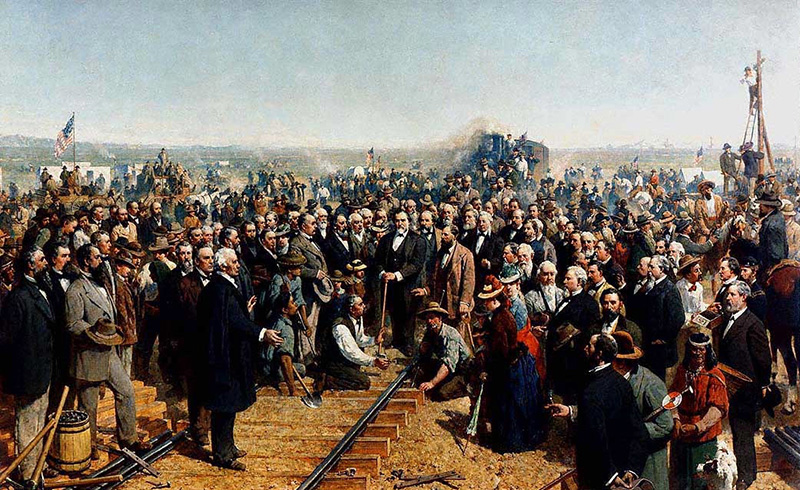 Ever since the first railroads in the 1830s, men had dreamed of the day one could board a train and roll safely and majestically from coast to coast in the United States. Prior to the Civil War, about 30,000 miles of track had been laid, mostly in the North and Midwest, most of it east of the Mississippi. Abraham Lincoln was one of the chief railroad lawyers in Illinois, and his election to the Presidency meant new contracts for rail lines in and out of Chicago moving in every direction, as well as the beginnings of a line that would traverse the nation from shore to shore. In 1860 a young engineer named Theodore Judah lobbied Congress and the President about the feasibility of building a railroad through the Sierra Nevada Mountains at the Donner Pass. In 1862 Congress passed the Pacific Railroad Act, Chartering two companies to build a transcontinental railroad: the Union Pacific and the Central Pacific Railroads. President Lincoln signed it and the race was on. 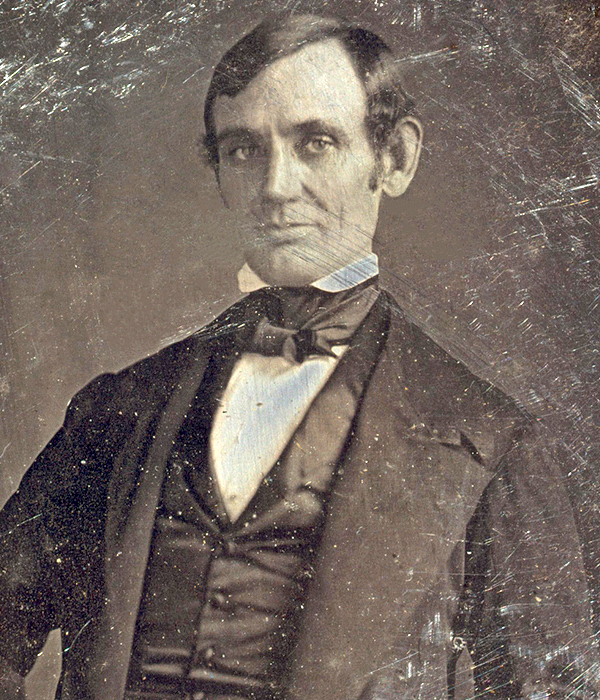 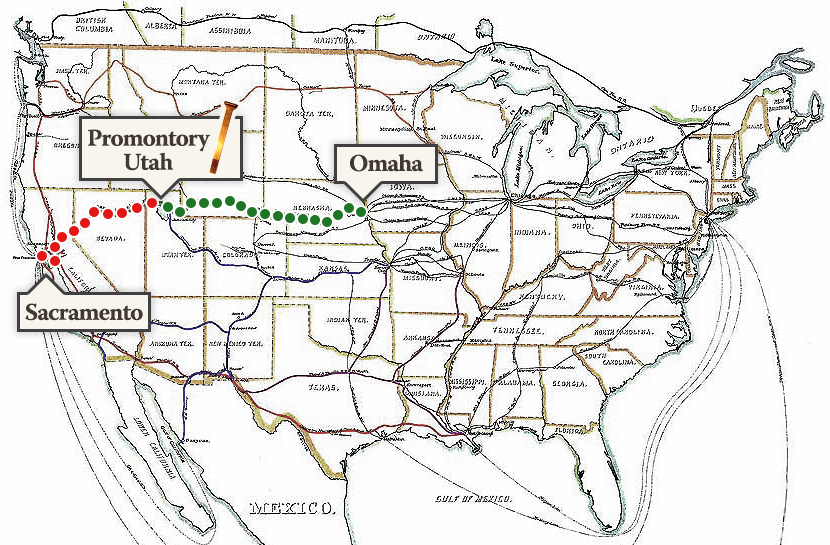 For seven years the two companies, starting at opposite ends of the country laying track, from Sacramento and Omaha, carved through mountains and conquered the prairies, as they raced to meet up with a completed railroad somewhere in the west. Each company would receive from the central government more than 12,000 acres and $48,000 in government bonds per mile of track, making the project a competition from the beginning. The owners of the railroads proved highly susceptible to bribes, secret deals, and appeals to and from key Congressmen and vendors. 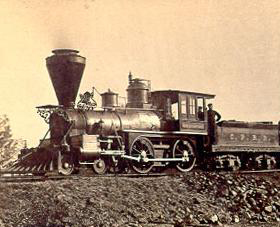 The Gov. Stanford Locomotive, built in 1862, was used by Central Pacific Railroad in the construction of the First Transcontinental Railroad. It was named in honor of the road’s first president, Leland Stanford, who also served as California’s eighth Governor (1862-63), and founded Stanford University. 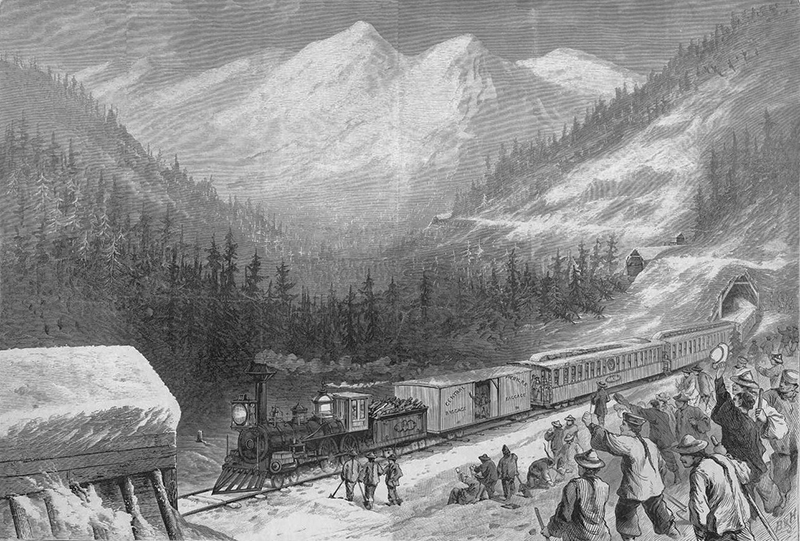 Four wealthy investors backed the Central Pacific: Leland Stanford, Collis Huntington, Charles Crocker and Mark Hopkins. Dr. Thomas Durant illegally obtained control over the Union Pacific, eventually setting up an illegal investment company that guaranteed incredible profits for all involved, which included a number of Washington, D.C. politicians, including men close to President Grant. The westerners hired 13,000 Chinese laborers who worked for very small wages but proved to be tireless and trusted workers, although they suffered many casualties in the incredible blasting of fifteen tunnels thorough the Sierra Nevada Range. Durant hired about 8,000 Irish, German and Italian laborers who also experienced heavy losses in bloody forays to stop them by the Plains tribes, especially the Cheyanne, Sioux, and Arapaho along the route of the iron rails. 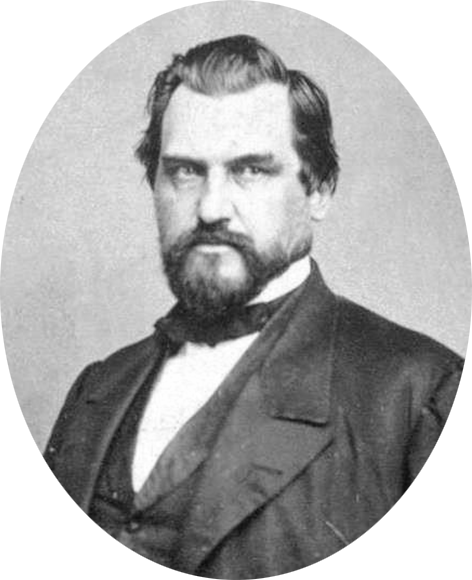 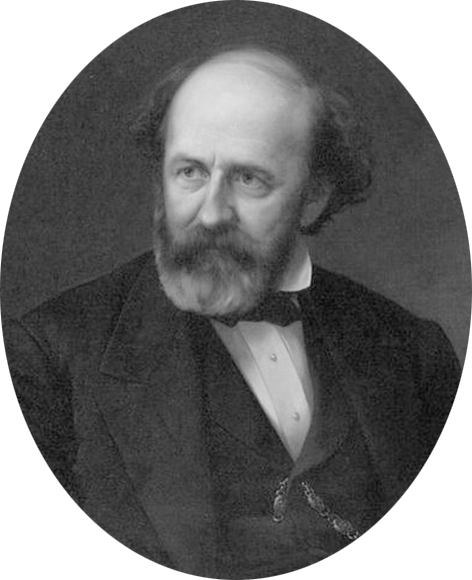 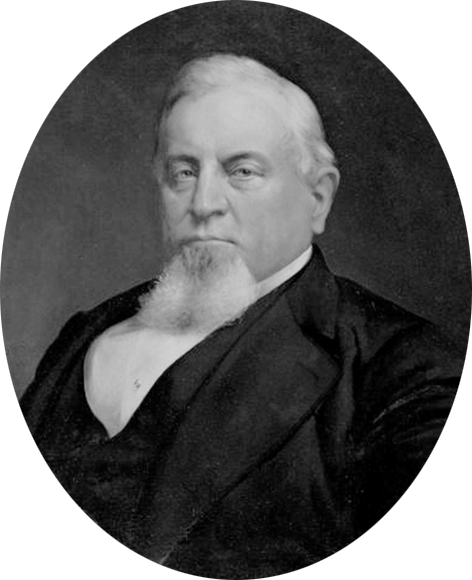 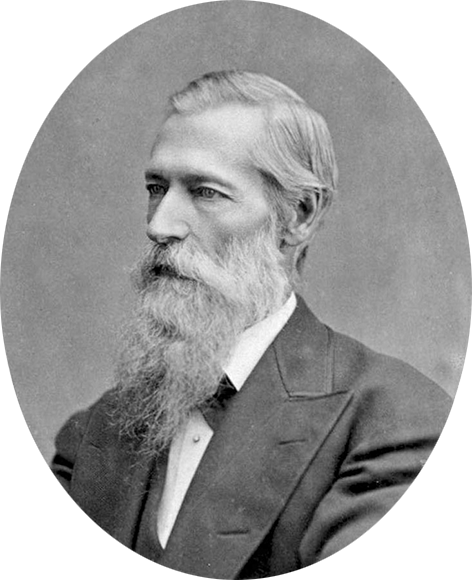 The laborers built moving towns along the path of construction, which contained all the vices known to man, to provide opportunities for the immigrants to spend their small wages. Violence accompanied the railroad all along the way. They built forty miles of snow sheds to keep snow off the tracks and they set a one-day record of laying ten miles of track. The rival teams met at Promontory, Utah on May 10, 1869. Leland Stanford made the first swing at a solid gold spike, missing and hitting a rail. An inebriated Thomas Durant swung next and completely missed. A railroad worker finally put in the spike. It now resides in the collections of Stanford University, founded sixteen years later by the President of the Union Pacific. 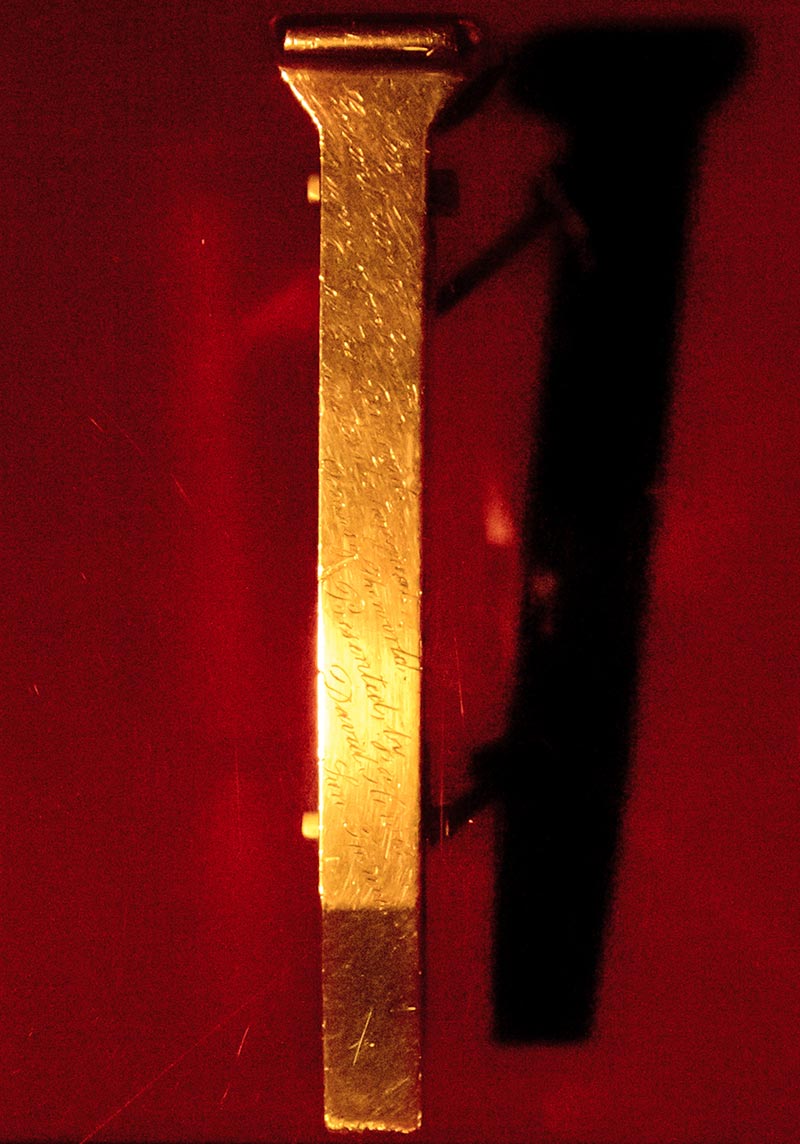 The 17.6-karat ceremonial “golden spike”, driven by Leland Stanford to mark the joining of the two rails, is on display at the Cantor Arts Museum at Stanford University 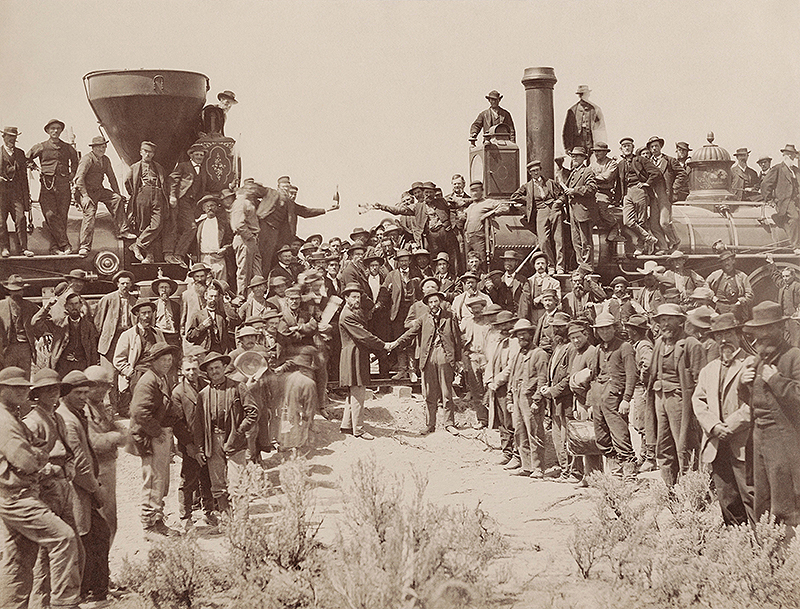 “East and West Shaking Hands at Laying Last Rail”
The ceremony for the driving of the Golden Spike at Promontory, Utah on May 10, 1869 marking the completion of the First Transcontinental Railroad

The Transcontinental Railroad opened the west to irresistible settlement and trade. No markets were too far for the expanding economy of the Midwest and West, and the creation of demand for steel for rails and bridges made the fortunes of several captains of industry. Cities grew up along the route and the ancillary branches of the road. It also spelled the beginning of the end of the buffalo herds and Native American tribal autonomy. It providentially made the exploration and mapping of the Grand Canyon possible and introduced the nation to other creation wonders of the West. Along with the wealth and beauty of it all came the scandals that plagued the Grant administration. It resulted in the development of the enormous political power and wealth of the railroad industry. In a way, the railroad made the West and triggered political and social contention that lasted well into the 20th Century.