The Coronation of Queen Victoria, 1837

“Even when I am old and gray, do not forsake me, my God, till I declare your power to the next generation, your mighty acts to all who are to come. —Psalm 71:18

ighteen years old, five feet tall, and eventually the mother of nine children, she became the most powerful woman on earth. Queen Victoria reigned in England for sixty-three-and-a-half years of the 19th Century. She ruled over the British Empire, which covered about 25% of the earth’s land surface, while the British fleet controlled the oceans. She served as monarch of approximately 400 million people, only 30 million of whom lived in the British Isles. Her coronation took place on June 28, 1837. Not for nothing is the second half of the 19th Century known as “The Victorian Era.” 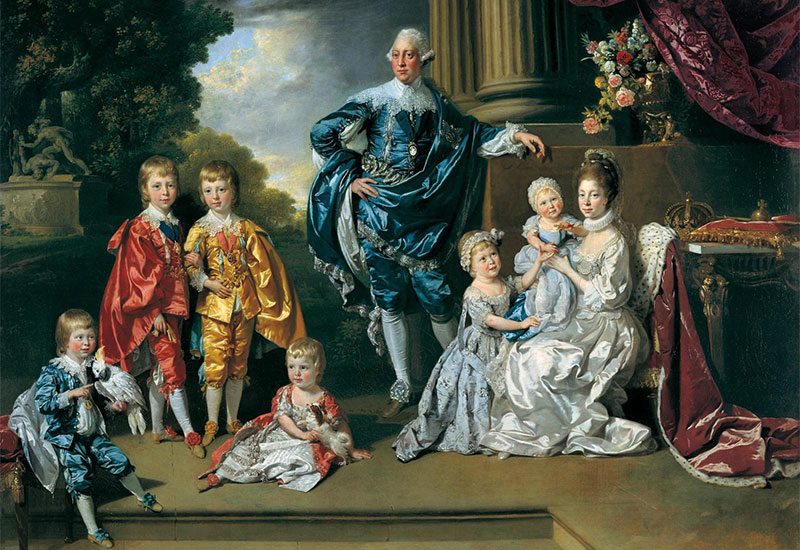 Victoria’s grandfather, George III, reigned for sixty years, lost the American colonies, and spent the last ten years of his life considered mentally disturbed, hence “mad King George.” King George and his wife Charlotte had fifteen children. When Victoria was born to King George’s fourth son, the Duke of Kent, she was the fifth in line of succession to the throne. In a series of unusual providences, George’s oldest son succeeded him as George IV, but everyone else between Victoria and the throne died before she turned eighteen. The King died less than a month after her 18th birthday, thus avoiding a regency. 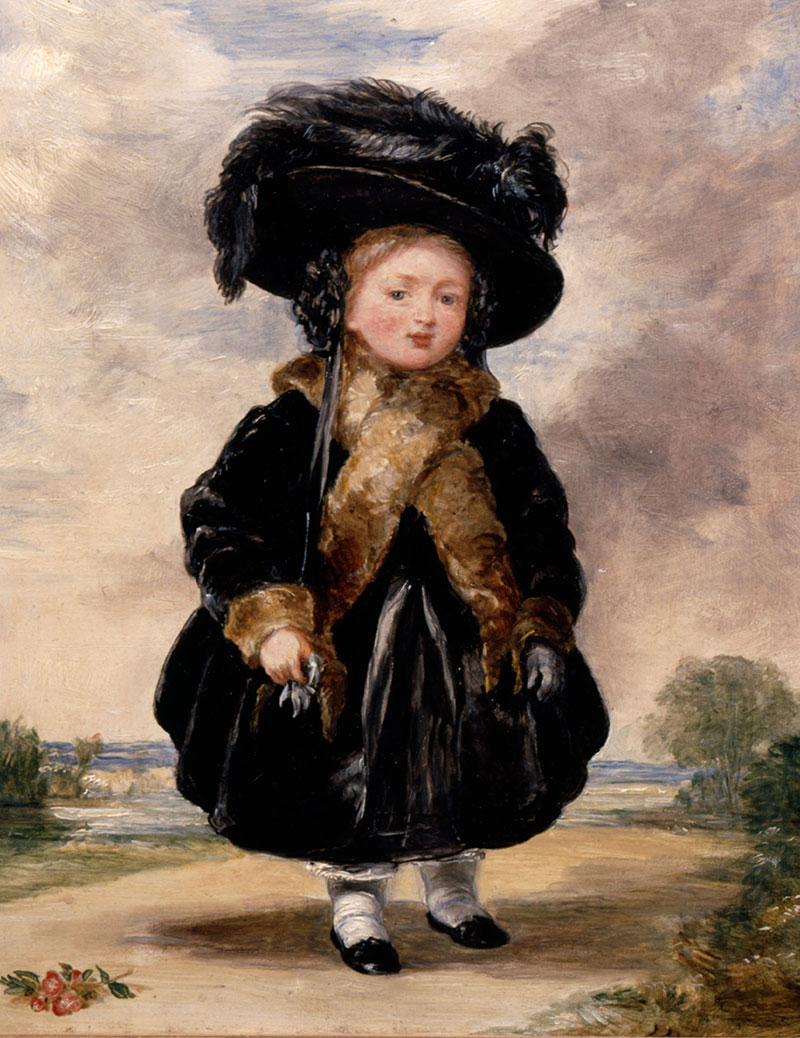 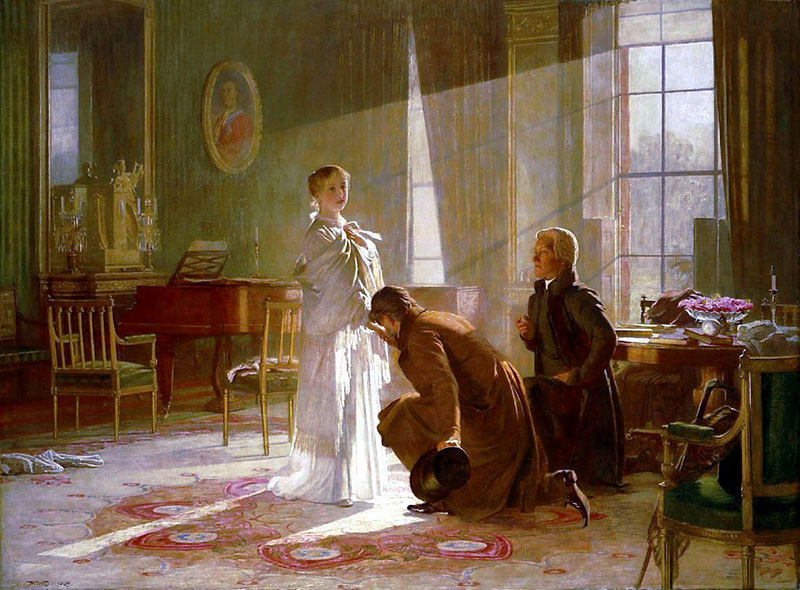 At 6am on June 20, 1837, Victoria receives the news of death of her uncle King William IV, and her consequential accession to the throne

Young Victoria’s mother, the Duchess of Kent, raised her apart from all other children, spending her time with tutors, her dolls, and her dog, Dash. Her mother put her on display in a series of journeys to different parts of the realm, meeting only people of whom her mother approved. When she came of age, the Duchess saw to it that a parade of noble princes made their way to her home for inspection and consideration for marriage. Victoria fell in love with her cousin Prince Albert of Belgium and their eventual marriage in 1840 became the beau ideal of wedded bliss and harmony until his untimely death twenty-one years later. 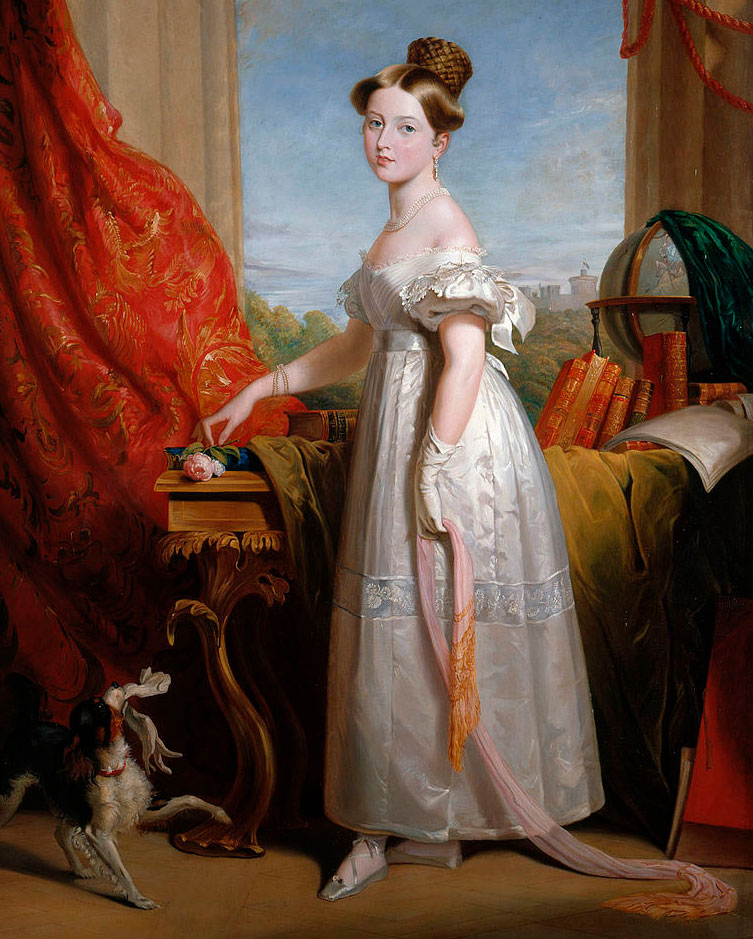 Victoria in 1833 with her spaniel, Dash 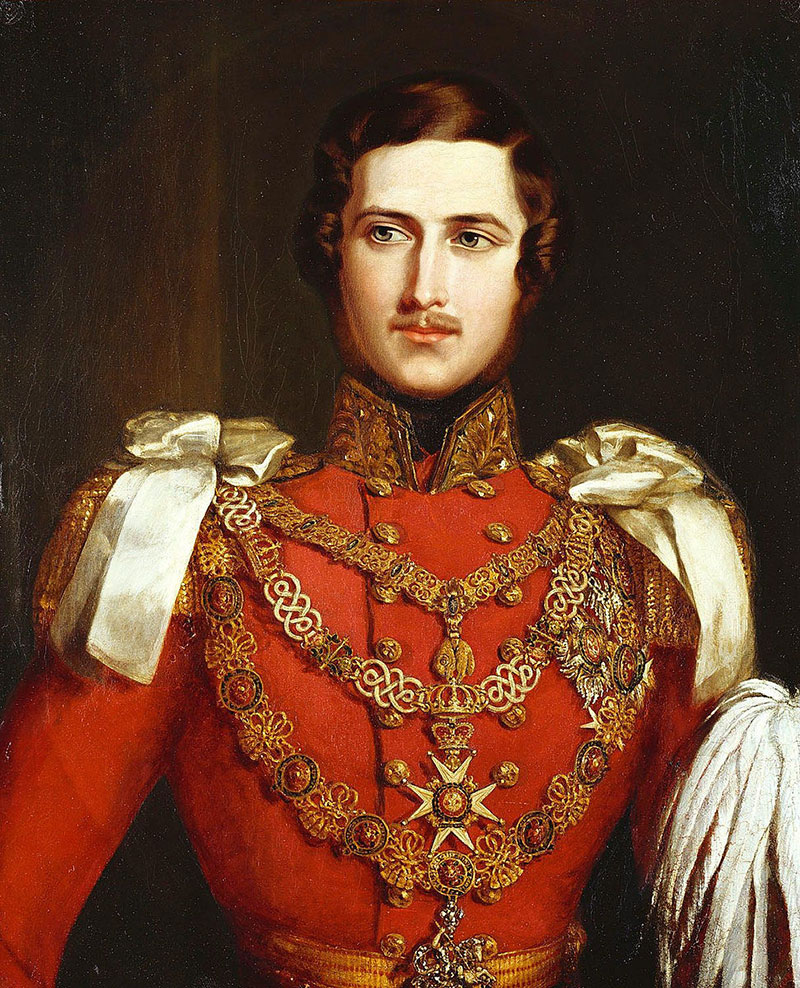 William Lamb, The Viscount Melbourne, the Prime Minister and a childless widower, became Victoria’s close advisor and confidant in the first four years of her monarchy. She would be served by more than thirty-three Prime Ministers, including fifteen from New Zealand and seven from Canada over her long reign. Of the ten who served her in Britain, William Gladstone and Benjamin Disraeli served the longest. As a constitutional monarch, her influence over policy enacted by Parliament could have been slight, but Victoria worked behind the scenes to make her wishes known and would use her popularity and position to direct the affairs of government on issues in which she strongly believed. 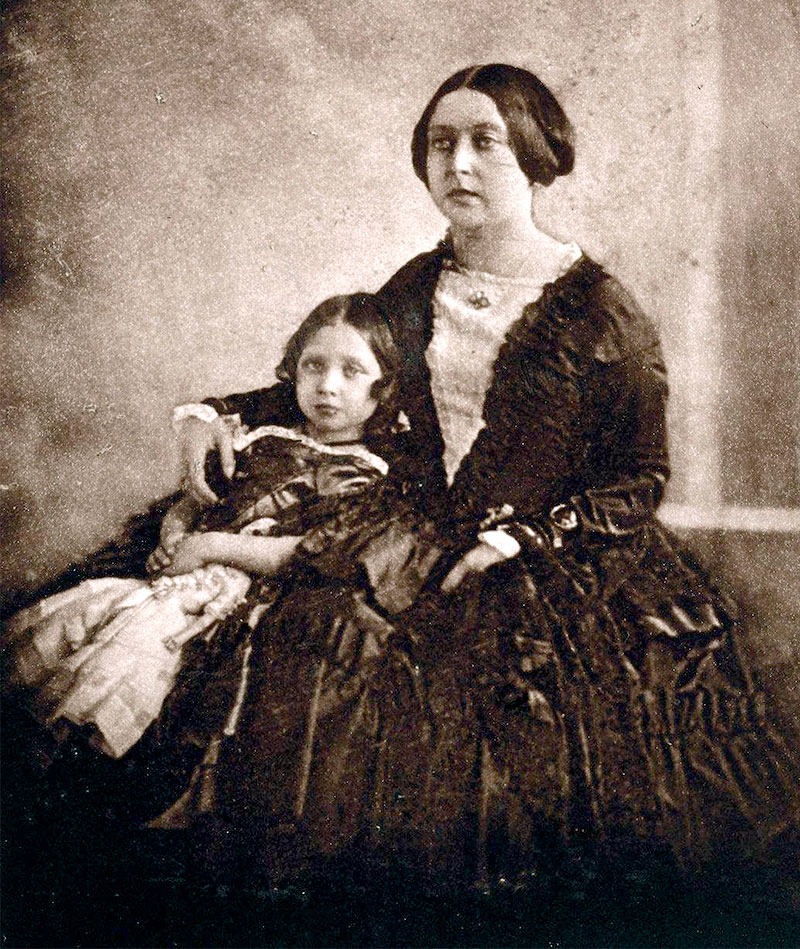 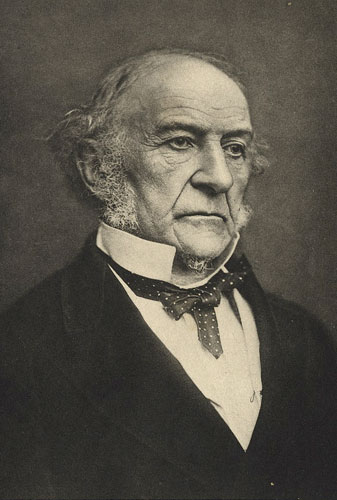 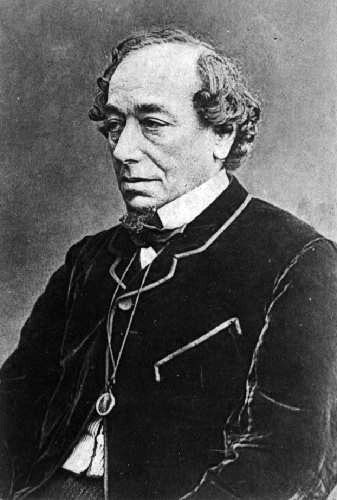 Because of the extent of the British Empire, and the control they exerted over foreign nations in Africa, Asia, and both North and South America, conflicts both commercial and military erupted throughout her reign. Little wars all over the globe required Victoria, ever mindful of her authority, position, and duty, to send the British Fleet and active duty regiments or brigades to defend English hegemony and reduce or pacify recalcitrant tribes. They served in remote places like Ethiopia, West and South Africa, India, New Zealand, and China—wherever the Union Jack flew and its authority was challenged.

The extent of the British Empire under Victoria in 1898

Queen Victoria lived a personal life of self-discipline and probity. So far did she exhibit Christian moral values, that her name itself became an adjective to describe religion, morality, evangelicalism, industrial work ethic, and personal improvement. During her reign, the international slave trade was abolished and enforced by the Royal Navy, slavery was ended in England’s colonies, and child labor in British factories. The first modern police force was created in London under P.M. Robert Peel’s guidance—hence their nickname, “bobbies”—and many ministries to the poor, and other private philanthropic enterprises went forward with the Queen’s approval. The cultural basis for such endeavors had been laid in the previous decades by Evangelicals, but with the support of the new monarch, they increased throughout the century. 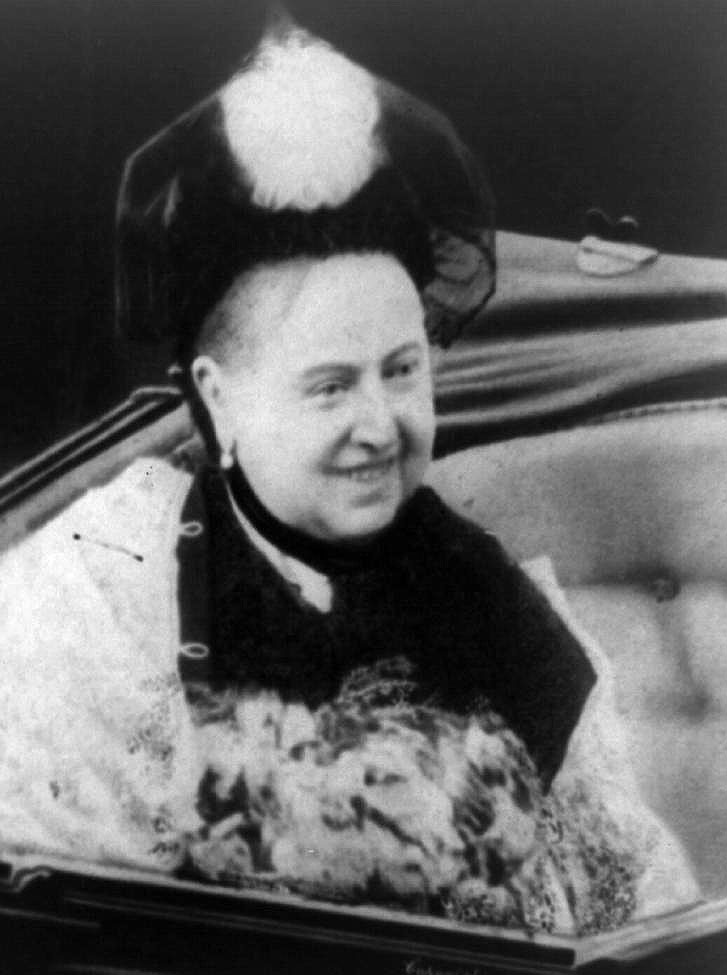 A rare glimpse of Victoria’s more jolly side, captured in 1887 by Charles Knight, and which he titled “Her Majesty’s Gracious Smile” 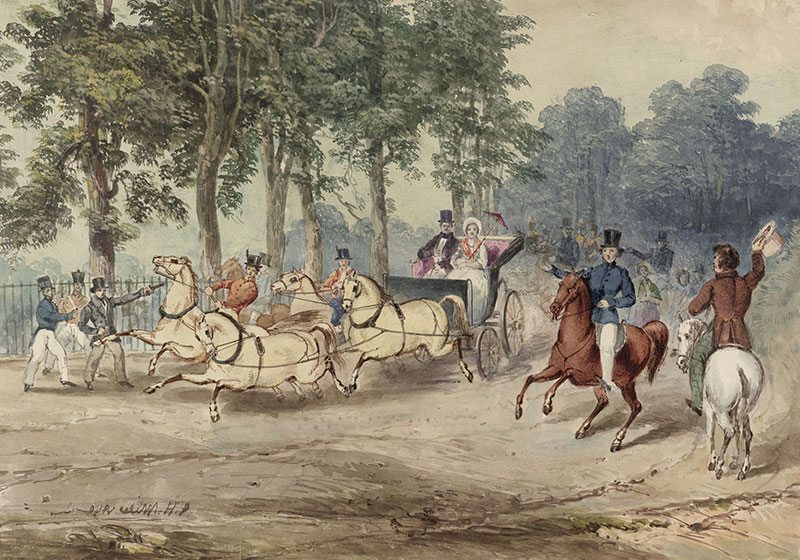 An 1840 watercolor of Edward Oxford’s assassination attempt—one of several attempts by various players, all of which failed

There were three or four assassination attempts on her life and all the perpetrators were captured and “transported” to Australia. Her popularity soared after every attempt. Besides the normal speculation and interest in the royal family, crises and scandals within the Royal household kept Victoria’s administrations in the news. The Irish potato famine, for instance, was both a crisis and a scandal, but a great grief to her—she personally donated the modern equivalent of 6.5 million pounds to Irish famine relief.

Prince Albert died of typhoid fever in 1861 and Queen Victoria was devastated; she wore black mourning clothes the remaining 40 years of her life. The Queen went into isolation for several years, travelling from one royal residence to another, never going out in public. She also ate to excess and gained weight, another incentive to remain private and isolated. She supported the Reform Act which doubled the electorate, but was strongly opposed to the women’s suffrage movement. When faced with a women’s suffrage bill passed in Parliament she responded with “she feels so strongly upon this dangerous and unchristian and unnatural cry and movement of ‘woman’s rights’… that she is most anxious that Mr. Gladstone and others should take some steps to check this alarming danger and to make whatever use they can of her name… Let woman be what God intended; a helpmate for a man—but with totally different duties and vocations.” The exception, of course, was herself, who was forced to be Queen by duty. 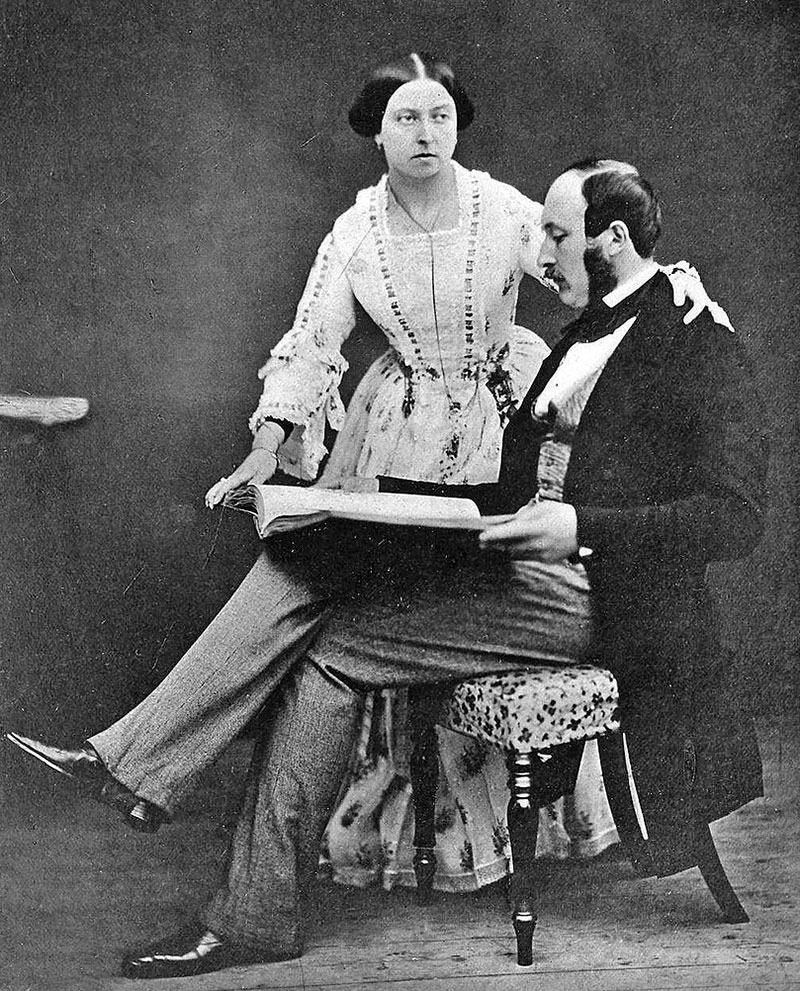 A mutually devoted couple,
Victoria and Albert in 1854 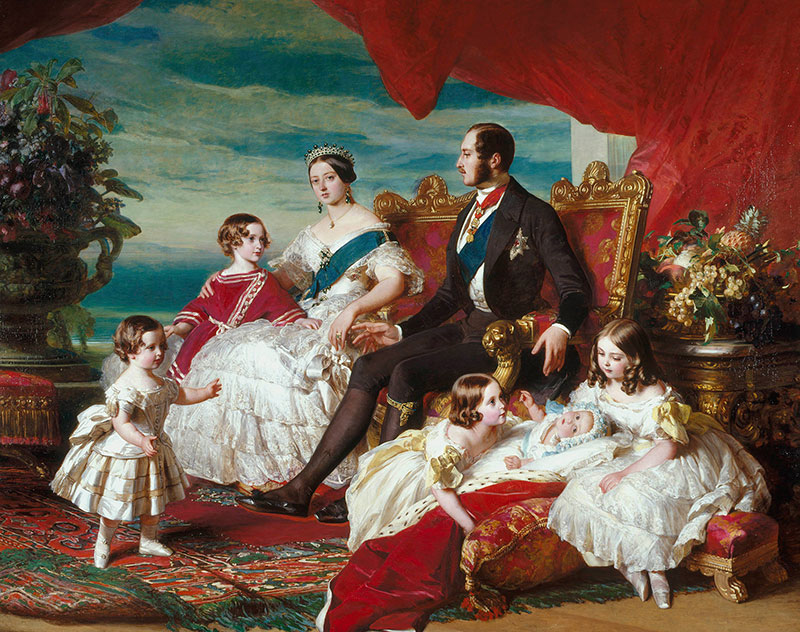 She supported P.M. Disraeli’s Public Worship Regulation Act of 1874, which removed several Catholic rituals from the Anglican Worship. The Queen liked shorter and simpler worship, privately, more in accord with the Presbyterians of Scotland. In 1887 England celebrated the Golden Jubilee (fiftieth year) of her reign, during which fifty kings and princes were invited to attend the festivities. Nine years later, she surpassed her grandfather as the longest reigning monarch in England’s history. She died at the age of eighty-one in January of 1901, attended by her son and successor Edward (VII) and grandson, Kaiser Wilhelm II of Germany. She was dressed in white for her funeral, her grief over the death of Albert finished, the grief of a grateful nation just beginning. Of her 42 grandchildren, 34 lived to adulthood, 9 sat on royal thrones of Europe and several were instrumental in bringing about World War I—The German Kaiser (Willie), the Russian Tsar (Nickie), and the King of England (Georgie).” 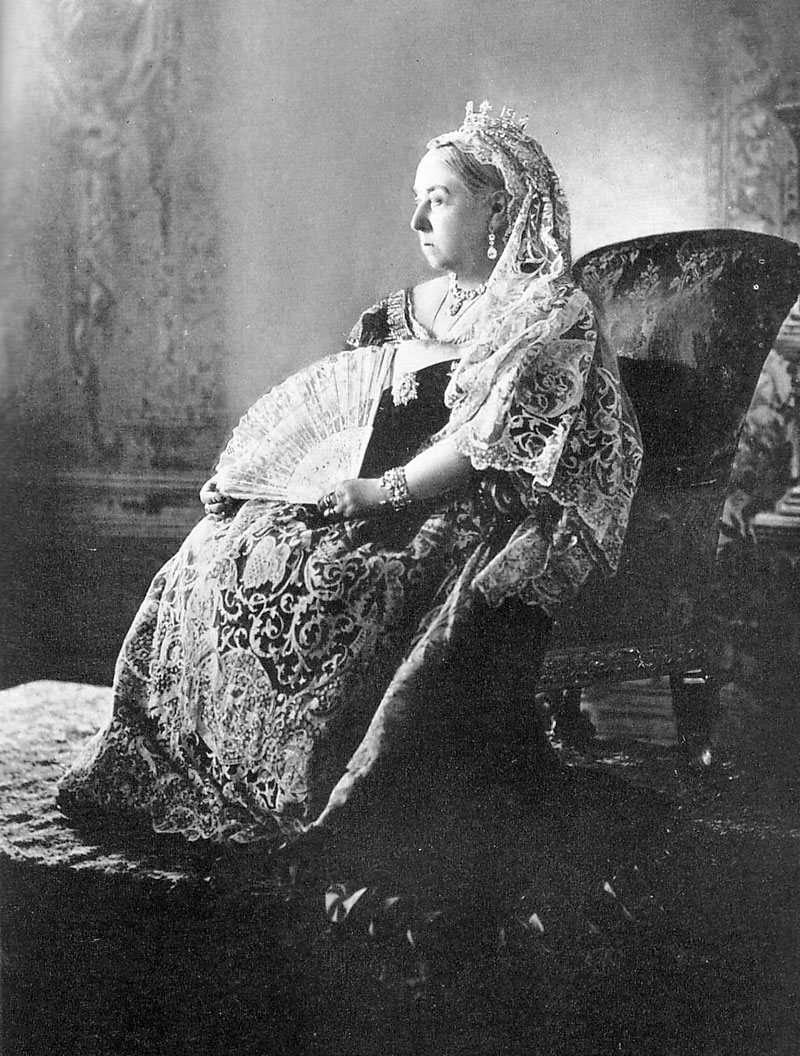 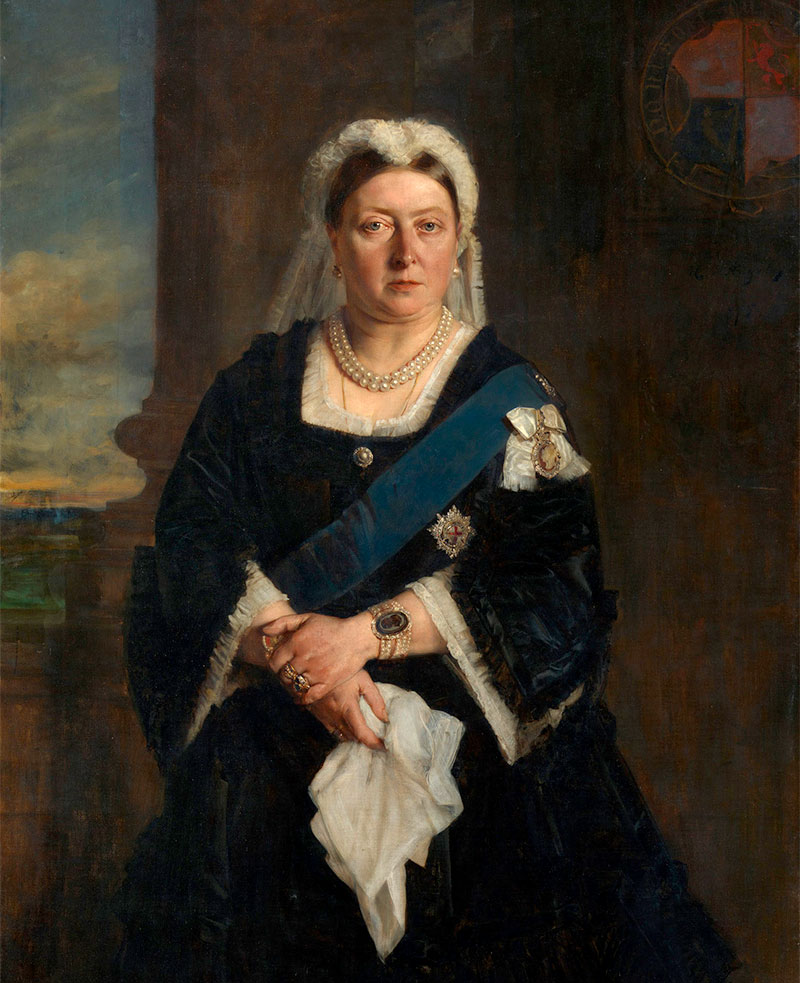 Victoria admired this 1875 portrait of herself by Heinrich von Angeli for its “honesty, total want of flattery, and appreciation of character”