“And it shall be that everyone that calls upon the name of the Lord will be saved.” —Acts 2:21

he North of Ireland, known collectively as Ulster, had been settled in previous centuries primarily by Scottish immigrants. Some had been brought there by the English landlords to work the land, others fled persecution or economic dislocation in Scotland. Over several hundred years, the Protestant inhabitants had developed a distinctive culture known for hard work, biblical fidelity, and faithful attendance at their Presbyterian Churches. By the middle of the 19th Century, however, a certain complacency regarding their souls had set in, and one pastor wrote that the Church would either drift into infidelity and liberalism or God would send a revival of “heart religion” through the preaching of the Gospel, earnest conviction of sin and the widespread operation of the Spirit of God in the hearts of the spiritually unconcerned. A young minister and participant in what actually occurred in Ulster, later wrote a book entitled The Year of Grace, A History of the Ulster Revival of 1859. 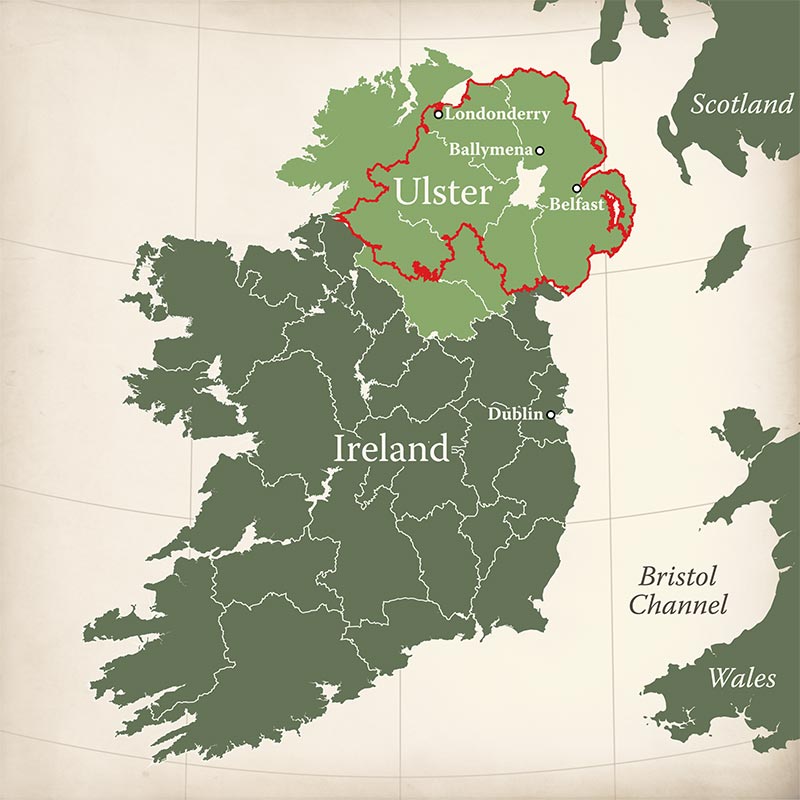 Stories abound regarding the “outpouring” of the Spirit of God that year. But the awakening did not occur overnight. In the spring of 1855, a young man began a prayer meeting in his home to pray for the unconverted of his neighborhood. The idea grew and, among small pockets of concerned believers in Ulster, gathering for prayer became an earnest practice. While faithful ministers still preached the Gospel and a few parishioners met to pray for the pastor and for the conversion of the lost, little change occurred as a few years passed. In March of 1859, in the town of Ballymena, a young man threw himself down in the public square and cried out for God’s mercy. 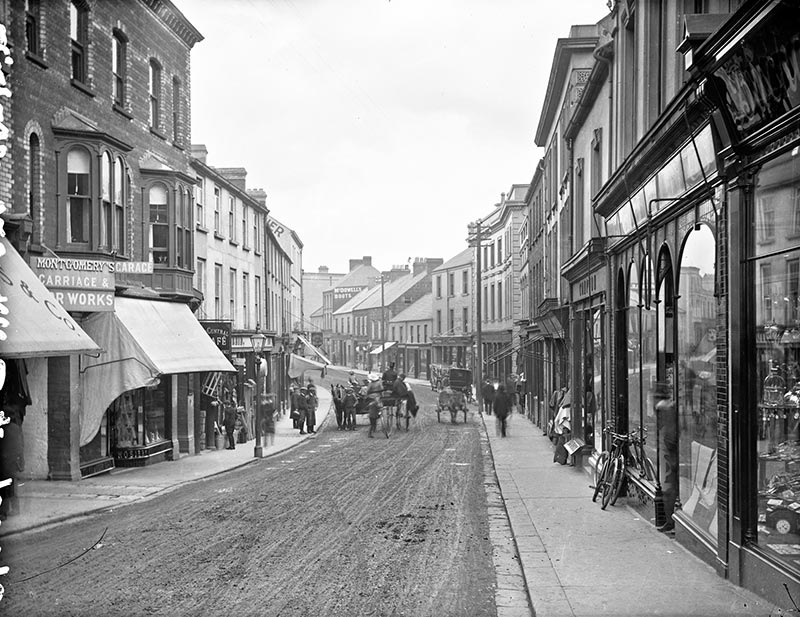 Church Street in Ballymena, around the turn of the century

James McQuilken, and his fellow prayers, in Ahoghill, just six miles away, invited everyone they knew to join them at the local church for a prayer meeting on the evening of March 14. Hundreds of people responded and the meeting had to move into the street outside. As the Gospel went forth and conviction of sin overcame the multitude, the first spiritual fruits of what became known as the Great Ulster revival, were brought to faith. As the awakening spread, young people responded by the dozens, as had happened during the Great Awakening in Colonial Massachusetts a hundred twenty years earlier. Street preaching reached multitudes with the Gospel over the next twelve months or more. 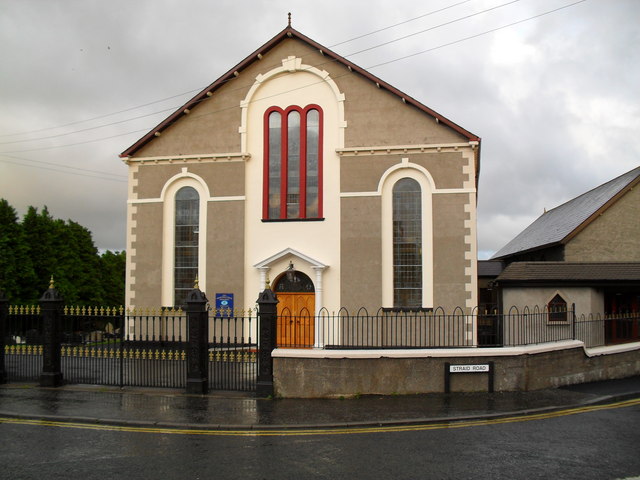 First Presbyterian Church Ahoghill where a March 14, 1859 thanksgiving service was held, attended by an estimated 3,000 people

As with all true revivals, the effects were felt instantly in the churches and in the society at large. All across Ulster, from Belfast to Londonderry, churches were packed and had to embark on building extensions. Pubs and distilleries were forced to close as alcoholism declined. The jails in many places remained empty; families returned to biblical patterns, and converts remained steadfast. Pastors estimated that well more than a hundred thousand people came to faith in Christ and joined the churches. A young man from Ballymena, a town of 6,000 inhabitants and the center of the linen trade, summarized what happened when the Holy Spirit wrought His saving work in that town in 1859:

“The week which began with May 17th, can never be forgotten . . .When the great outpouring came, worldly men were silent with an indefinite fear, and Christians found themselves borne onward in the current, with scarce time for any feeling but the outpouring conviction that a great revival had come at last. Careless men were bowed in unaffected earnestness, and sobbed like children. Drunkards and boasting blasphemers were awed into solemnity and silence. Sabbath-school teachers and scholars became seekers of Christ together; and languid believers were stirred up to unusual exertion. . . Every day many were hopefully converted: passing through an ordeal of conviction more or less severe, to realize their great deliverance, and to throw themselves with every energy into the work of warning others, or of leading them to the Lord. . . Every evening the churches were crowded, and family worship became almost universal. Part of the dinner hour was devoted to singing and prayer, and the sound from numerous groups of worshippers could be heard afar borne on the summer breezes. Long neglected Bibles came into general use. . .” —The Year of Grace, William Gibson 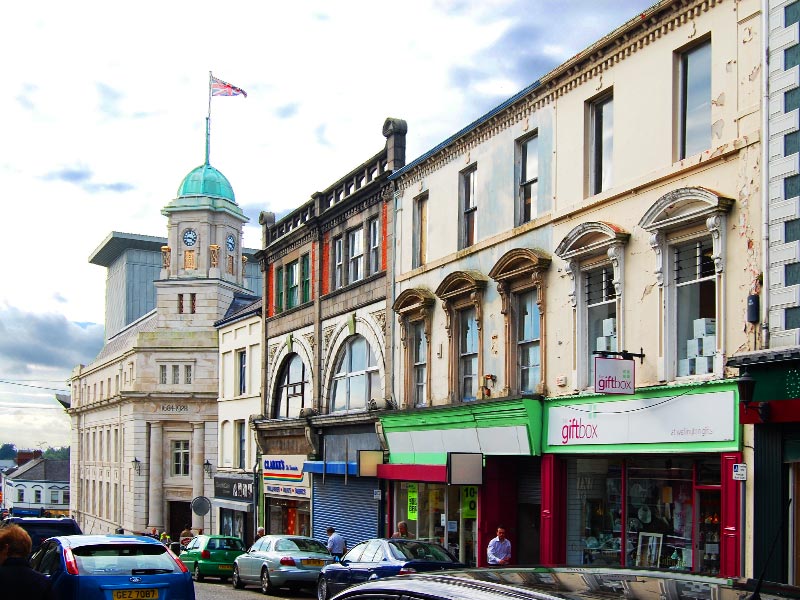 Ballymena thoroughfare with townhall in the background

Real revival has rarely been seen in our own country and our own times in such power. Years of earnest prayer preceded the outpouring. Faithful Gospel preaching of the whole counsel of God also preceded the awakening. Such a revival was seen as the only salvation of a society in Ireland that was already considered Christian but had fallen asleep and compromised the truth. The revival restored and reformed the culture for another generation or more. Pray, preach, repent, believe, restore.