olfgang Amadeus Mozart has one of those famous names that requires only his surname for everyone to know to whom you refer. Mozart would live only thirty-five years but he built a musical reputation that has few rivals in history. He inspired his younger contemporaries Ludwig von Beethoven, Josef Haydn, and many other composers in his own day and long after. His compositions included string quartets, operas, symphonies, concertos, requiems, piano chamber music and more — some 600 compositions in all. Mozart’s musical genius had few rivals in history, and he did not wait long in life to begin.

“Mozart is the highest, the culminating point that beauty has attained in the sphere of music.” —Pyotr Ilyich Tchaikovsky 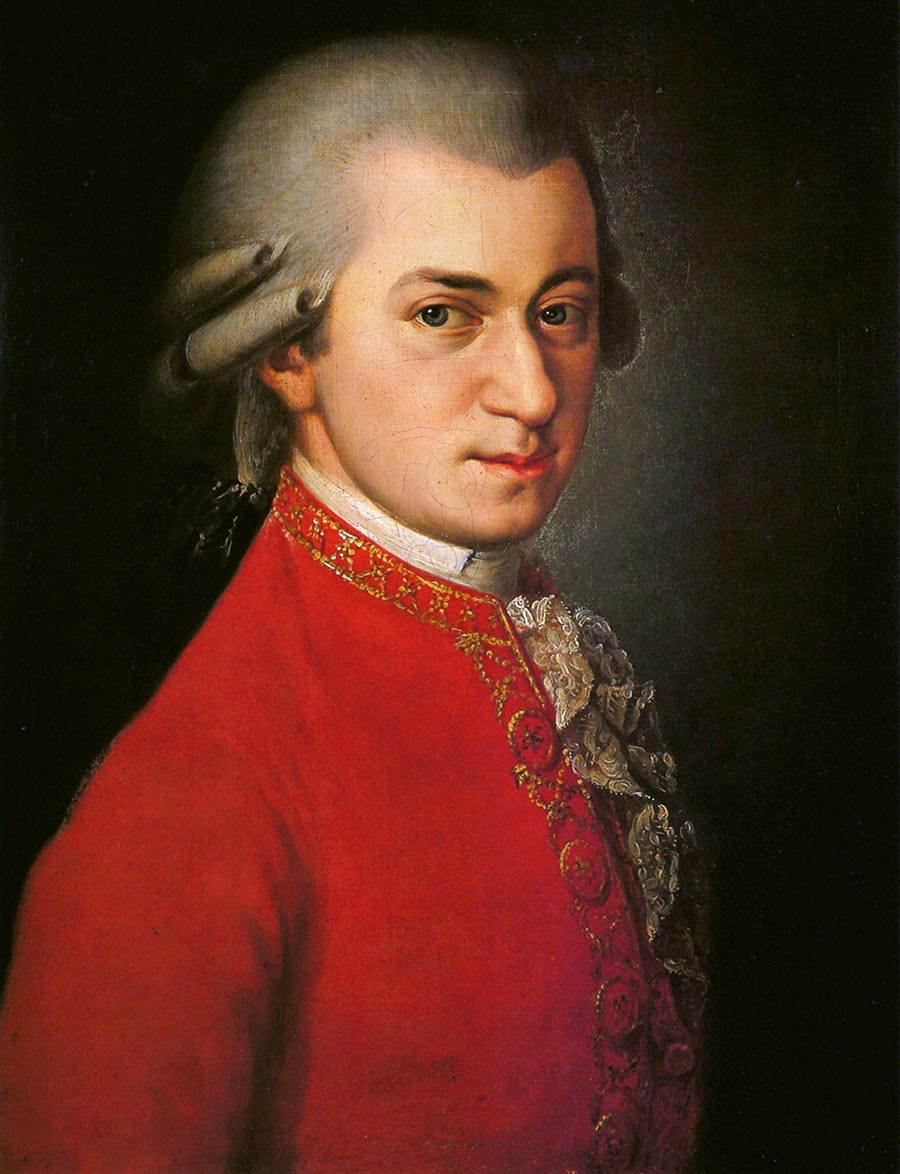 This 1819 posthumous portrait of Wolfgang Amadeus Mozart (1756-1791) was created by a wellknown Salzburg artist who was granted access by Mozart’s still-living sister, Nannerl, to several earlier images of Mozart to help portray an accurate likeness 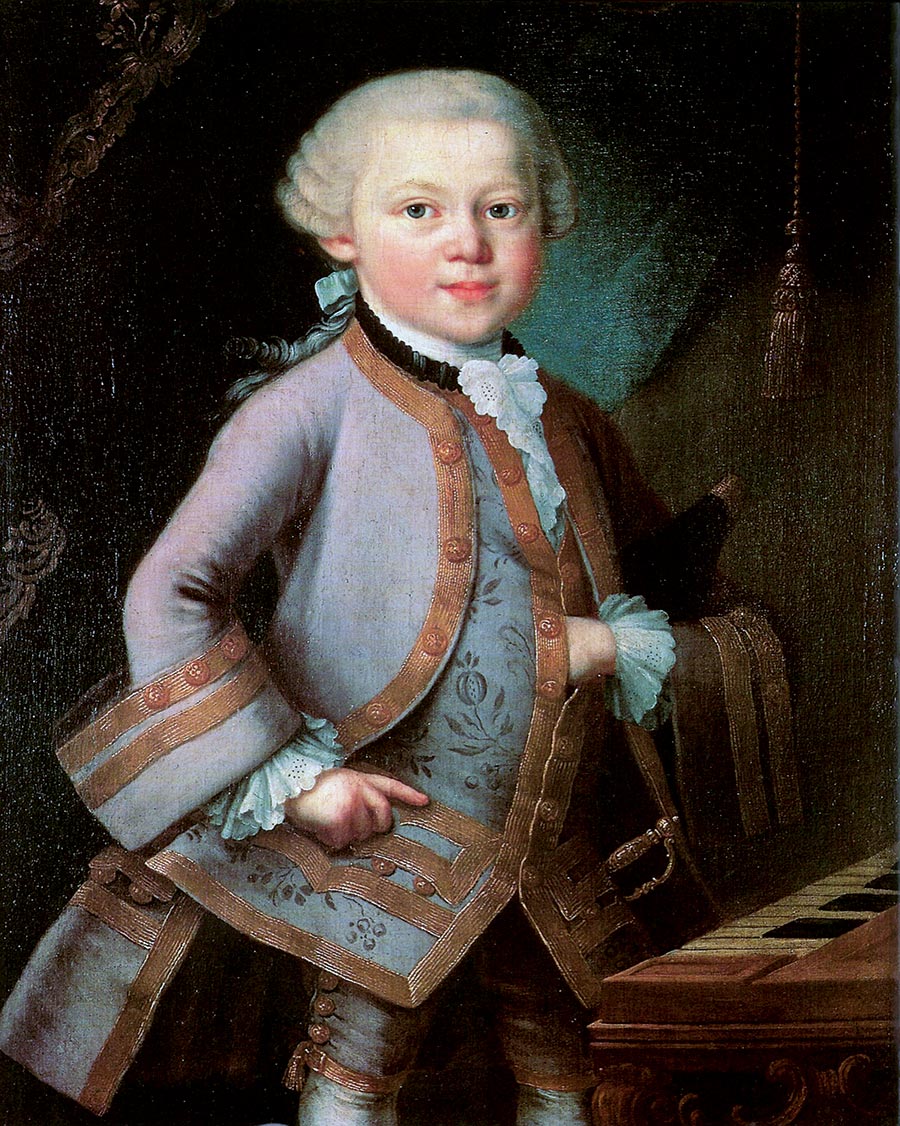 Mozart was born into a musical family in Salzberg, Holy Roman Empire, later Austria, in 1756. Four of his five older siblings died in infancy; his sister Nannerl lived a long life and was also a musical phenom in her early years. At the age of three, Amadeus watched his father teach keyboard to Nannerl. At four or five, he began composing little pieces of music on his own, which his father wrote down. Mozart’s father, Leopold, taught him music, foreign languages (other than his native German) and academic subjects, then took both children on tour as musical child prodigies. The trips enabled young Mozart to meet other composers; he especially appreciated spending time with Johann Christian Bach (eighteenth child of Johann Sebastian Bach) in London. At the age of eight, Mozart wrote his first symphony. 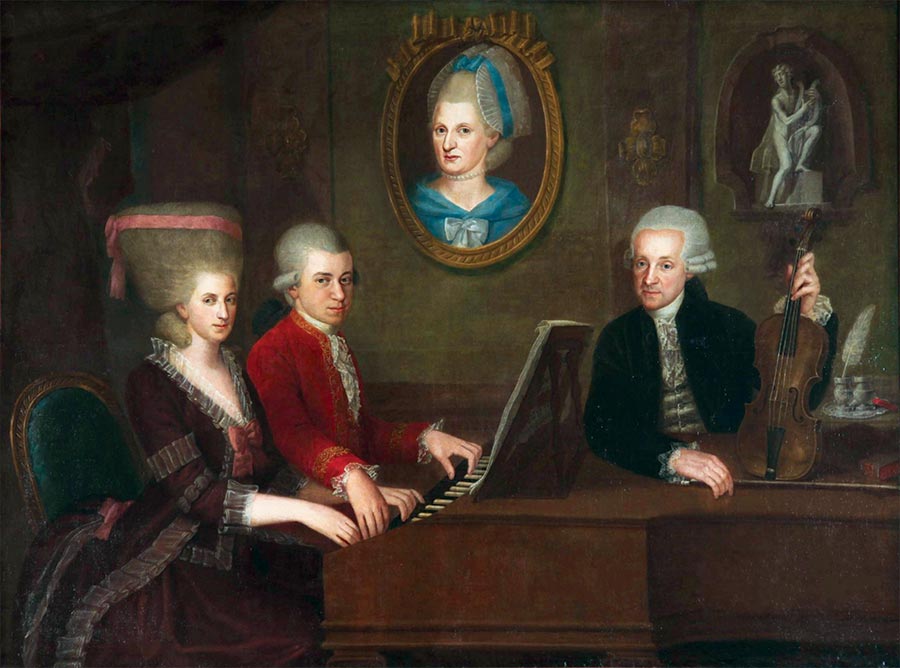 “Mozart is the greatest composer of all. Beethoven created his music, but the music of Mozart is of such purity and beauty that one feels he merely found it-that it has always existed as part of the inner beauty of the universe waiting to be revealed.” —Albert Einstein 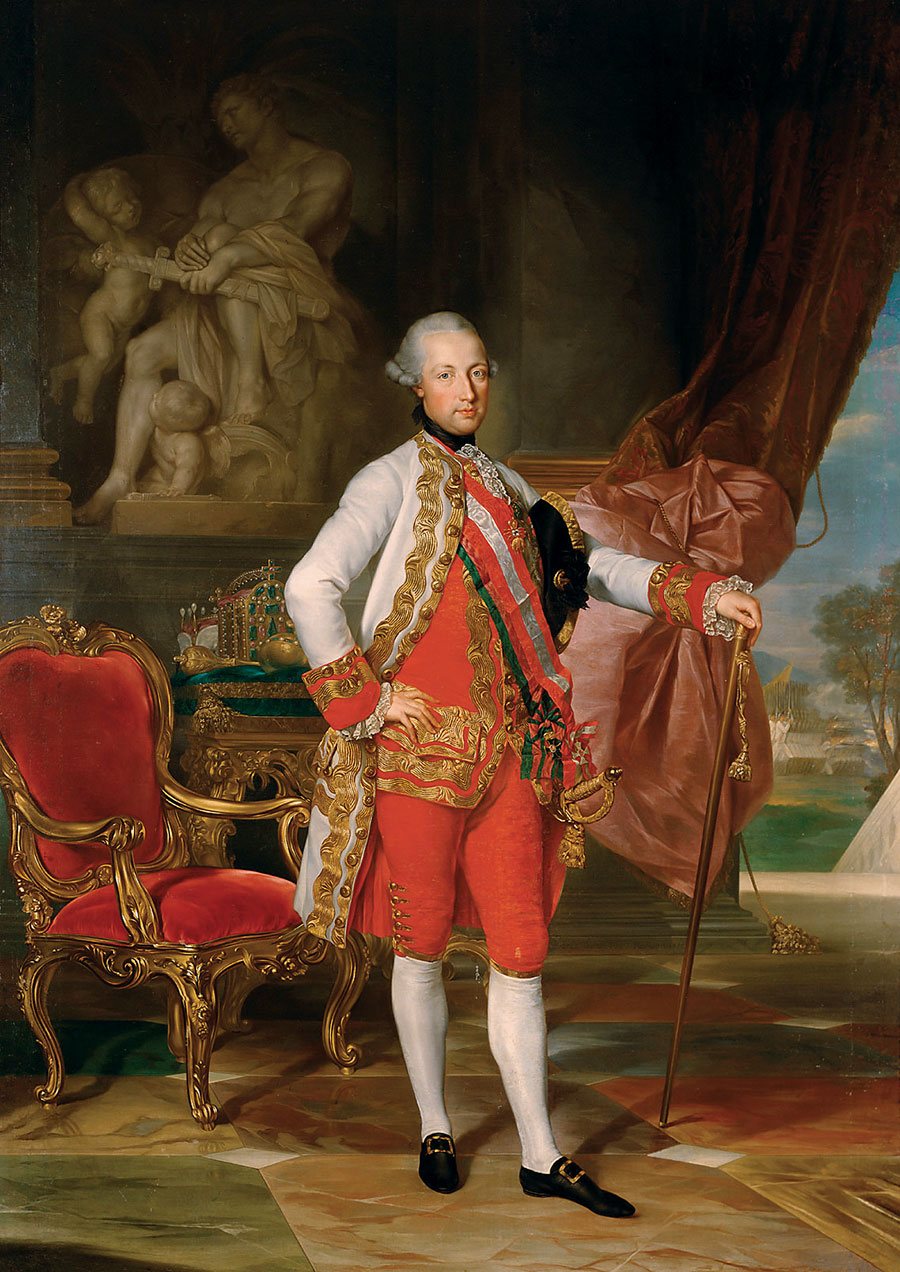 In the 18th Century, composers sought wealthy patrons or were hired by princes or kings to provide musical entertainment or to produce works of renown. Mozart’s early life was spent travelling and seeking sponsors. His father took him to many countries in Europe, performing and seeking audiences and financial backing, until 1773 when he was employed, at the age of seventeen, as court musician by the prince of Salzburg. After four years, he hit the road again, beginning in Paris. Two years later, he met the new emperor, Joseph II, in Vienna; eventually the monarch gave him substantial commissions and part-time employment.

In 1782, Mozart married Constanze Weber with whom he had six children, four of whom died in infancy. He continued to travel, compose, and organize concerts with himself soloing on piano. He produced music in every classical genre of the day and excelled in all of them. He gauged the preferences of his audiences and wrote to please them. After hearing the Sistine Choir in Rome perform an allegro considered unique to their repertoire, Mozart later wrote it all down from memory. In his second visit to Rome, he was given an award by the Pope. 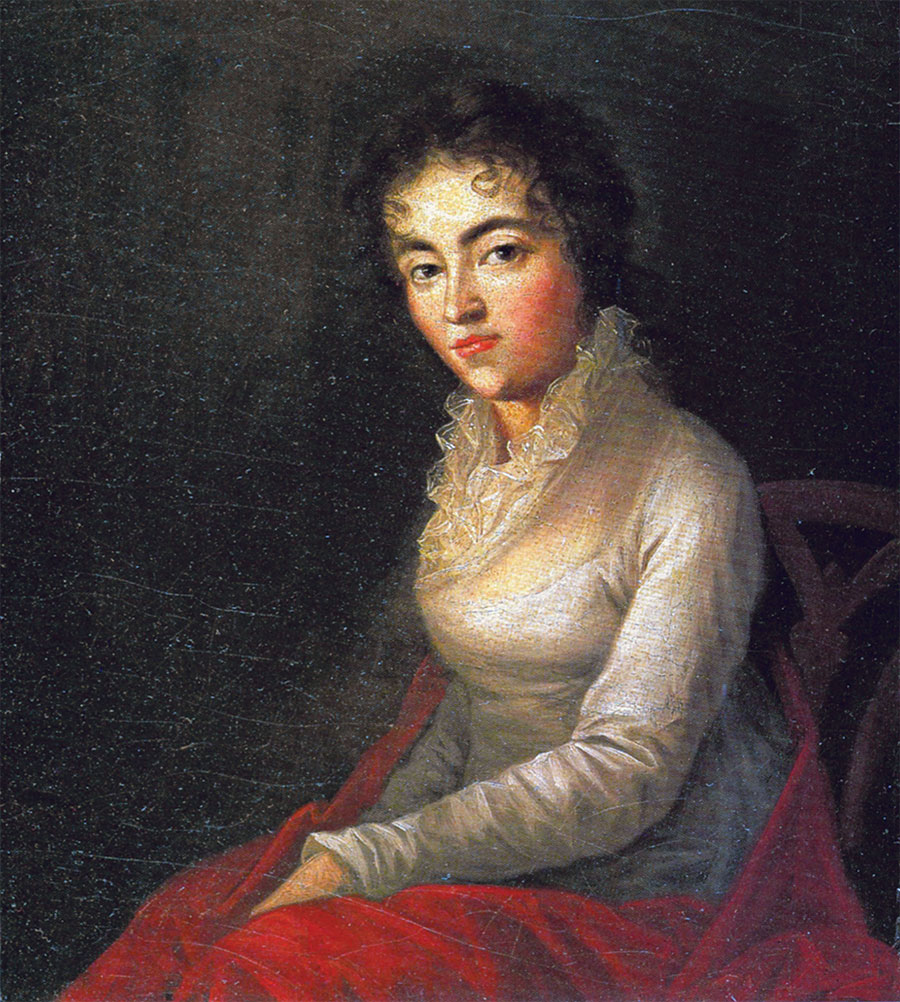 He had periods of hectic creativity that astounded his contemporaries. His operas met with great success and are still performed today by the great opera companies. Upon his death in 1791, Mozart was widely regarded as the greatest composer of his time. Since that time, with changing tastes and evaluation of all the other composers of the classical period, only Beethoven has challenged the child prodigy who astounded Europe with his music.

“The most tremendous genius raised Mozart above all masters, in all centuries and in all the arts.” —Richard Wagner 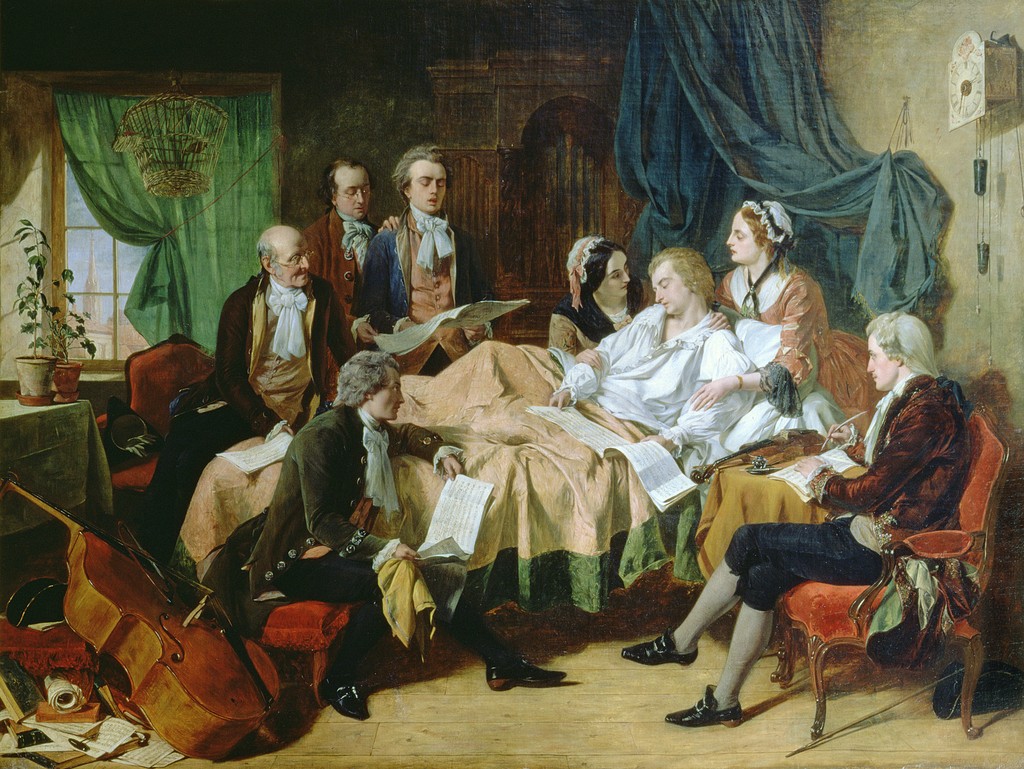 The Last Hours of Mozart, by Henry Nelson O’Neil, 1860s

A few years ago a 21-year-old basketball player who led the NBA in scoring and was predicted to be the greatest ever, told a reporter that he was so great someone should write a biography of him. Bill Bradley, a retired Hall of Fame player was asked to comment and replied, “the only truly great 21-year-old in history who deserved a biography at that age was Mozart.” I do not remember the name of the young NBA player — he never made it to the Hall of Fame.

Listen to Popular Selections by Mozart