“Let nothing be done through strife or vainglory; but in lowliness of mind let each esteem other better than themselves.” —Philippians 2:3

he news of Queen Victoria’s death raced around the world. Several generations had been born and died since her ascending the throne in 1837. The British Empire became the mightiest in Europe during her reign, as British troops fought on five continents, while her navy controlled the oceans of the world. Her nine children had all married into Royal families in Europe, as had most of her forty-two grandchildren. Queen Alexandrina Victoria and Prince Albert of Saxe-Coburg and Gotha created a family tree of unequalled royal branches and roots that dominated European political power without equal for more than a century. 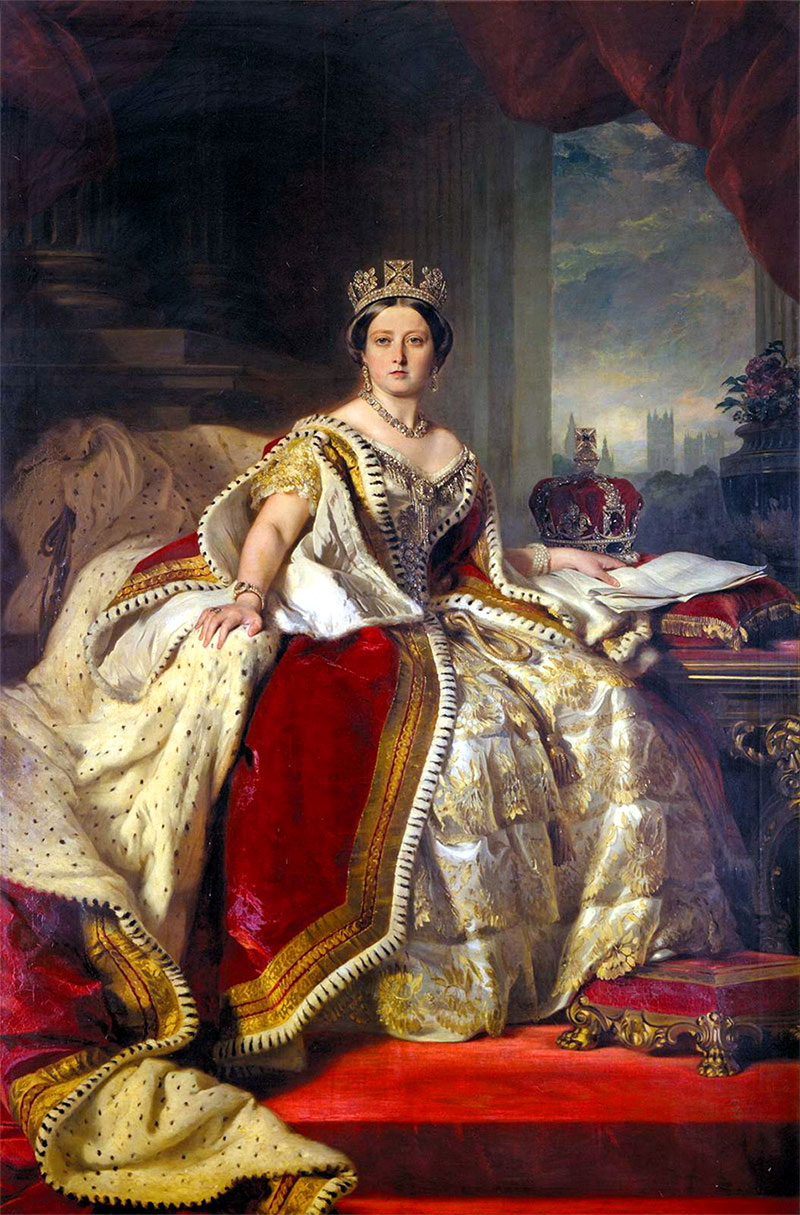 At birth, Victoria was fifth in line for the throne after her four uncles. Through a succession of childless marriages, and other providential convolutions, Victoria became the queen presumptive upon the death of her uncle William IV. Victoria’s mother, the Duchess of Kent, controlled every aspect of her life, making Victoria sleep in the same bedroom with her, and denying her company with any children deemed unsuitable. No children were suitable. After what Victoria deemed a “rather melancholy” childhood, she became a strong-willed teenager, rebuffing a number of her mother’s overbearing pressures. 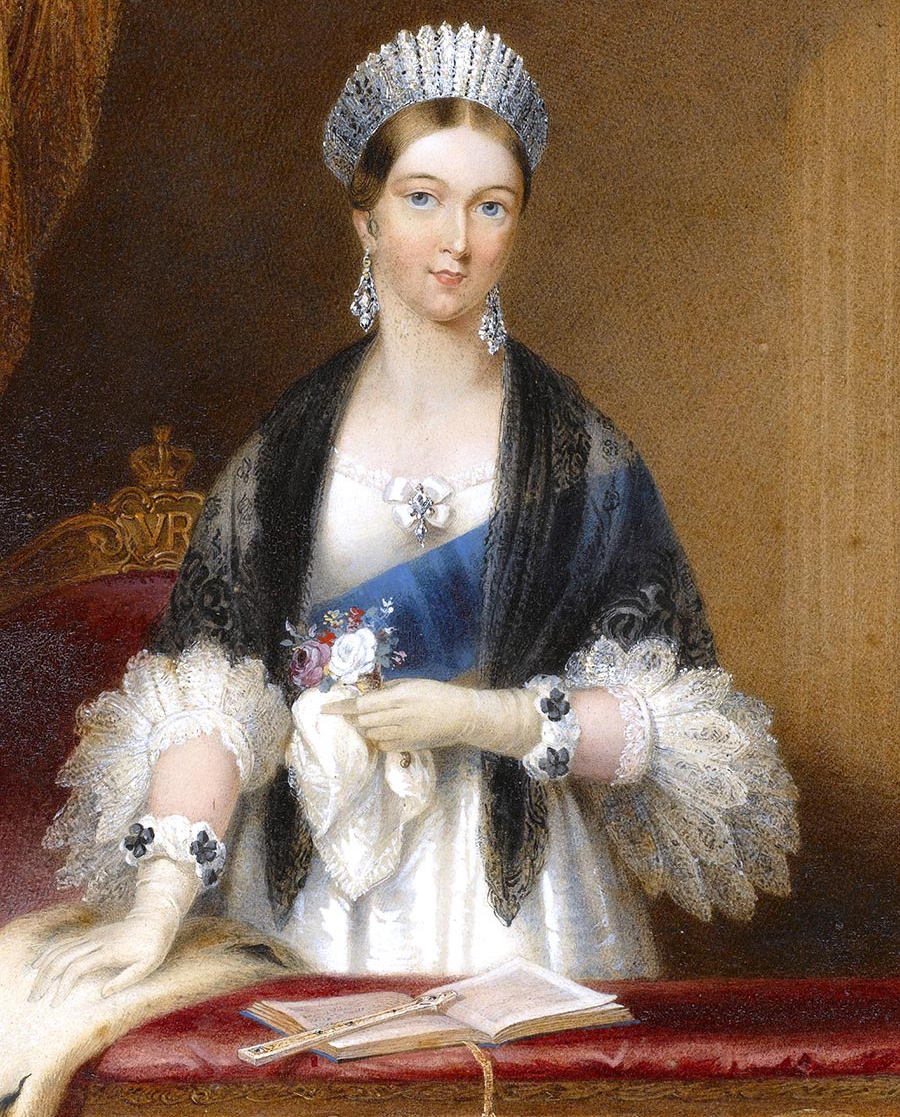 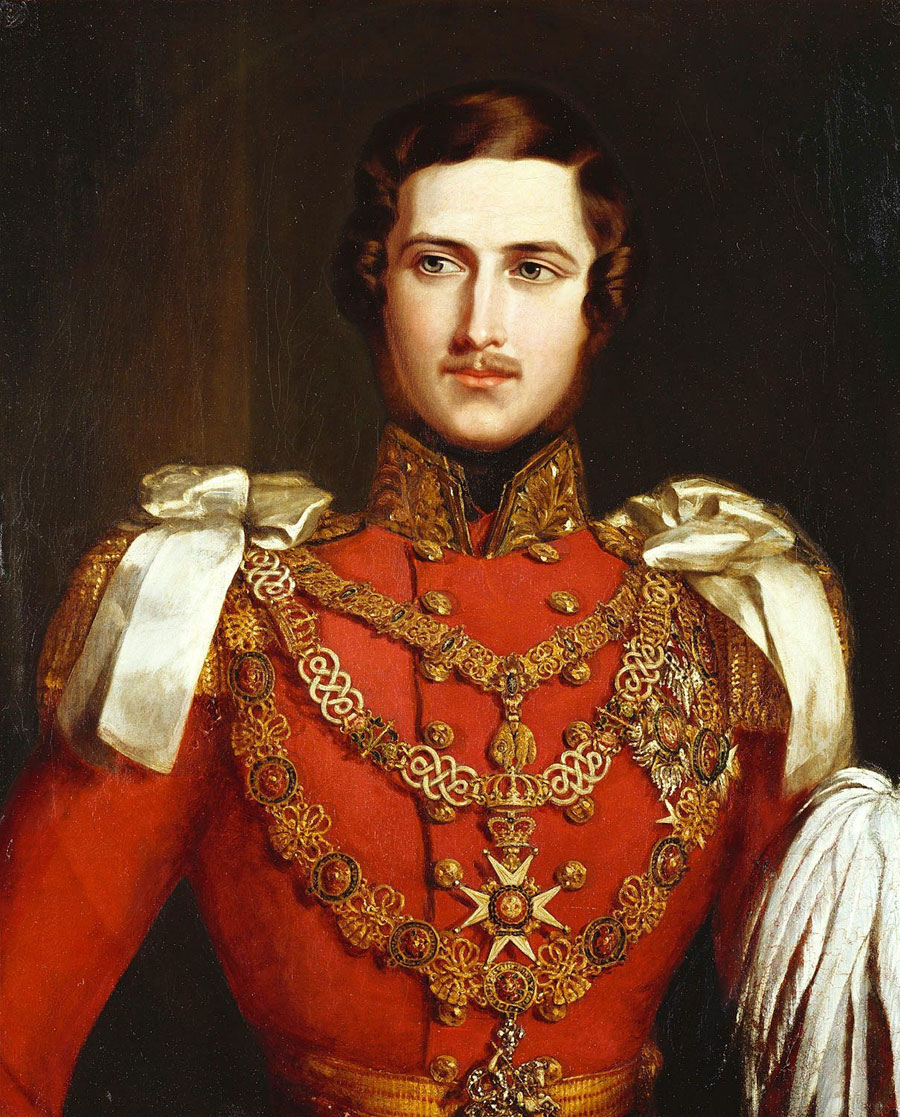 Prince Albert in 1840, the year of his marriage to Victoria

Beginning in 1836, various relatives began parading potential marriage partners from Royal families before the seventeen-year-old princess. King Leopold of Belgium, the Duchess’s brother, entered his nephew, Prince Albert of Saxe-Coburg and Gotha, into the sweepstakes, and as Providence would have it, Victoria was smitten from the first meeting. She would remain smitten long after the birth of their nine children and his death. 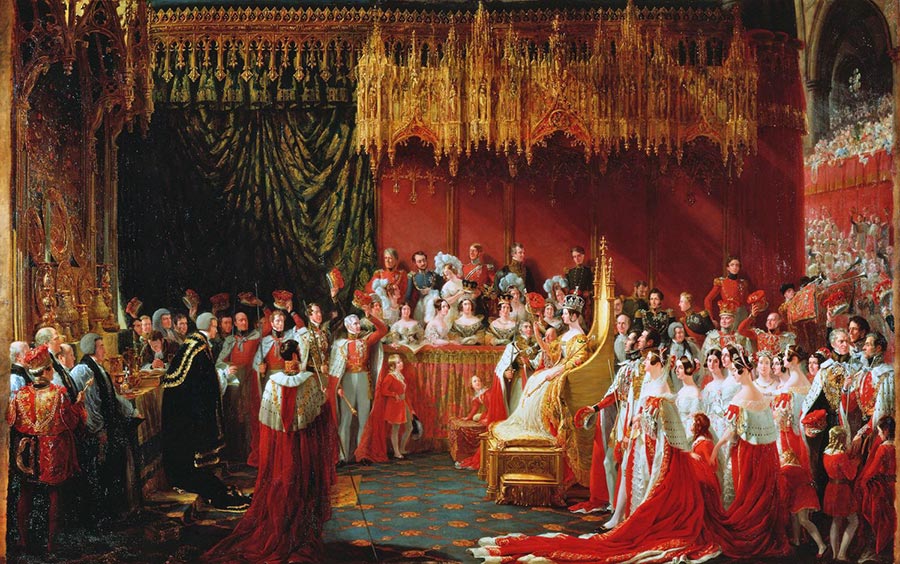 The coronation of Queen Victoria in 1837

She became Queen of Great Britain a month after her 18th birthday. Almost a half a million people came to London for her coronation at Westminster Abbey. Victoria at first had to rely heavily on counselors, especially the Prime Minister as she learned the intricacies of her position. She and Albert married in 1840 in what she called the “happiest day of my life.” In the first fifteen years of Victoria’s reign there were at least five failed attempts to assassinate her. Also during that same period, three different Prime Ministerial regimes rose and fell from power. In 1845 the Irish potato famine killed a million Irish and caused another million to emigrate. Victoria personally donated the modern equivalent of seven million pounds to famine relief, the highest donor of any person in Britain. She visited Ireland in 1849, which was greatly appreciated but failed to quell the Irish independence movement. 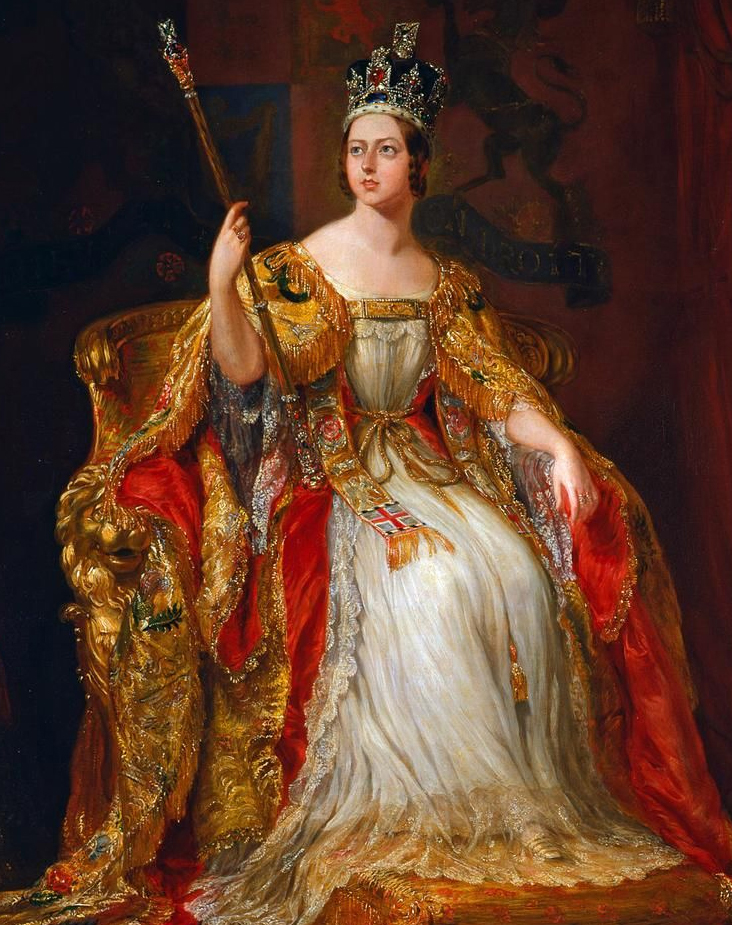 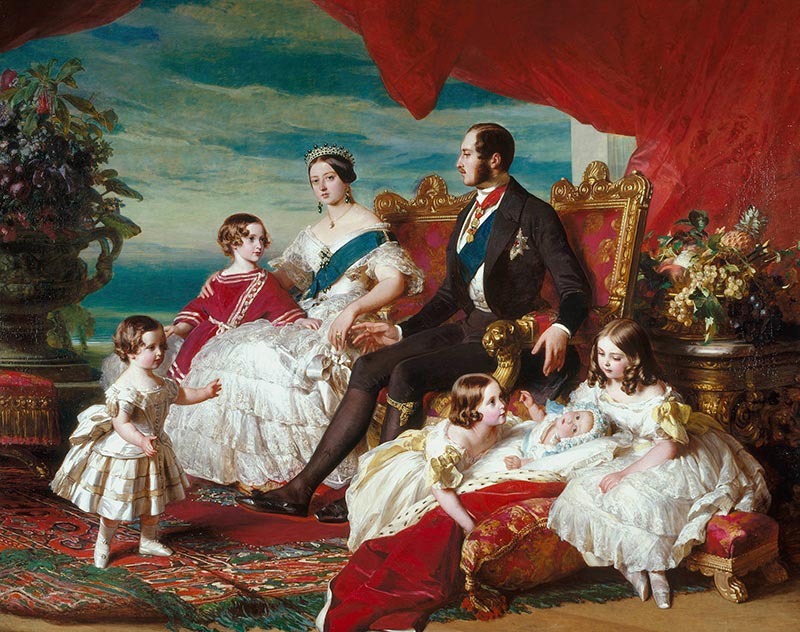 Throughout her sixty-four-year reign, Victoria oversaw great imperial expansion till, by 1913, a dozen years after her death, Britain ruled over 412 million people (23% of the world’s population) and more than thirteen million square miles. Britain also became the “workshop of the world” throughout the Industrial Revolution. In order to hold all of that together, “Victoria’s little wars” using both her naval dominance of the oceans and her well-trained regiments of the army, fought wars against the Abyssinians, Ashanti, Maoris, Boers (twice), Chinese (twice), Sudanese, Egyptians, and European powers in the Crimea. 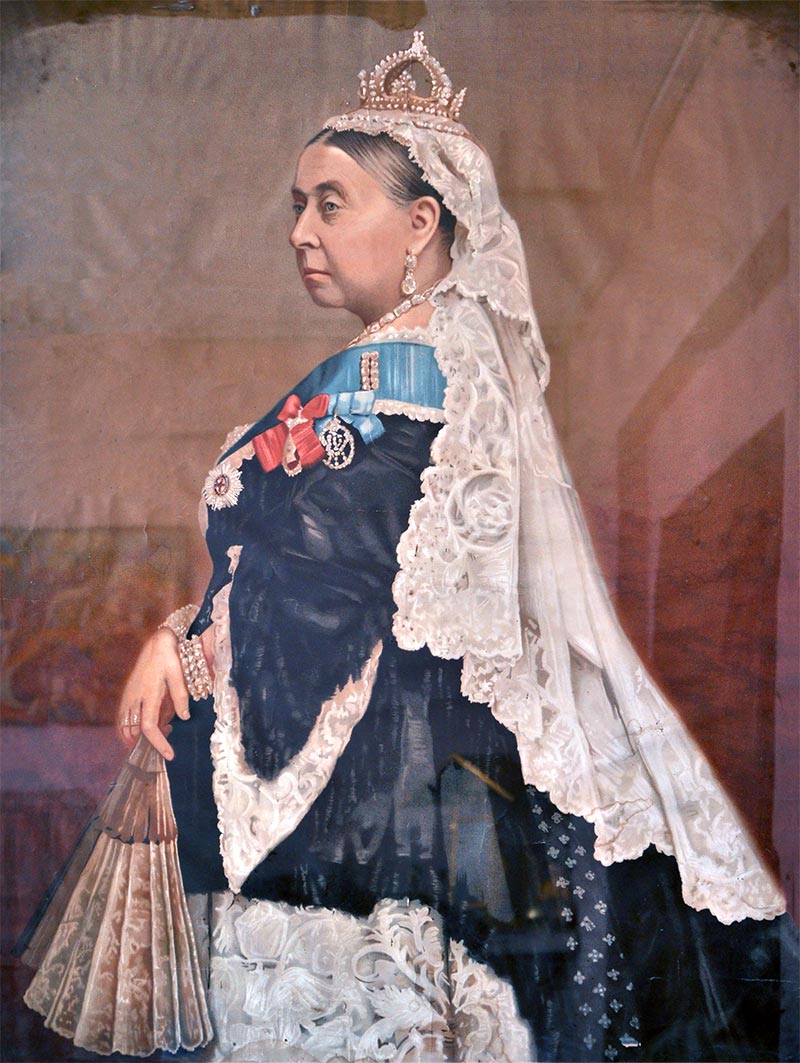 She also had to battle rumors and scandals that arose over a number of incidents and relationships in her family. She was so shattered by the death of Prince Albert in 1861 at the age of 42, that she wore black mourning garb for the rest of her life. After his death she disappeared from public view, ate too much, and added weight to her five-foot frame.

The entire era was defined by Victoria’s reign, and even a type of evangelical morality appeared to prevail and characterize the times. Historian Harold Perkin described what became known as “Victorian values” inspired by the moral code of Victoria herself:

“Between 1780 and 1850 the English ceased to be one of the most aggressive, brutal, rowdy, outspoken, riotous, cruel and bloodthirsty nations in the world and became one of the most inhibited, polite, orderly, tender-minded, prudish and hypocritical. The transformation diminished cruelty to animals, criminals, lunatics, and children (in that order); suppressed many cruel sports and games, such as bull-baiting and cock-fighting, as well as innocent amusements, including many fairs and wakes; rid the penal code of about two hundred capital offences, abolished transportation [of criminals to Australia], and cleaned up the prisons; turned Sunday into a day of prayer for some and mortification for all.”

The death and funeral of Queen Victoria represented a most stunning display of the influence and family connections in the history of the world. 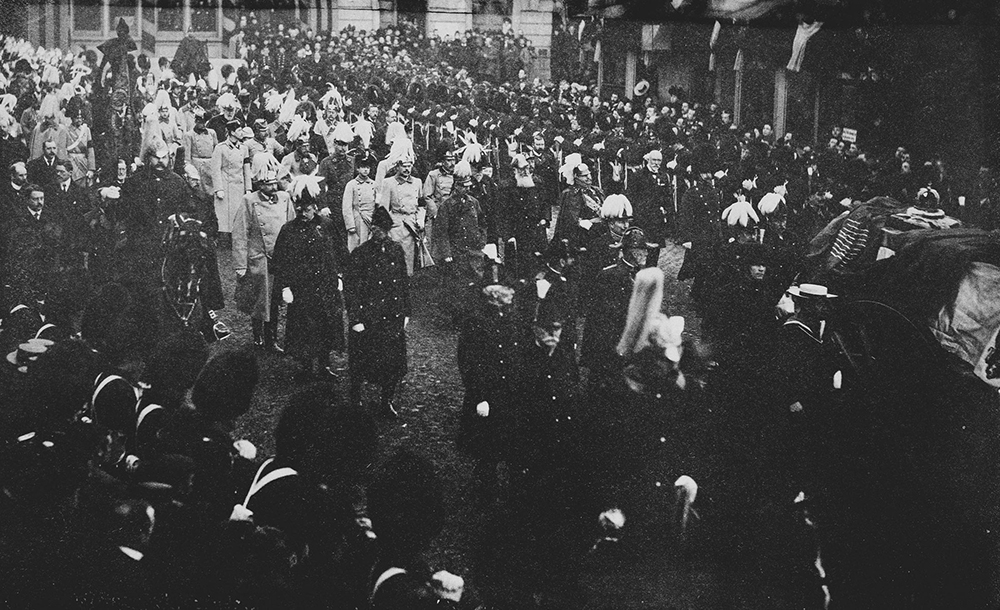