The Mysterious Death of Meriwether Lewis, 1809

“For what is your life? It is even a vapour, that appeareth for a little time, and then vanisheth away.” —James 4:14b

eriwether Lewis received little or no formal schooling until after the age of thirteen. He matriculated in the woods of rural Virginia, hiking, hunting and fishing, living out of doors, and analyzing and admiring the created world. After a rudimentary education which included reading, writing, and “scientific Latin nomenclature,” he served in the militia and army. Thomas Jefferson, a neighbor and now President of the United States, commissioned Lewis to lead the Corps of Discovery as co-captain with William Clark, and became one of the greatest “pathfinders” explorers and heroes of American history, beginning in his own day. Three years after the “Lewis and Clark” Expedition, at age 35 and serving as Governor of the Louisiana Territory, he was shot to death while travelling alone along the Natchez Trace, near Hohenwald, Tennessee, still an unsolved mystery. 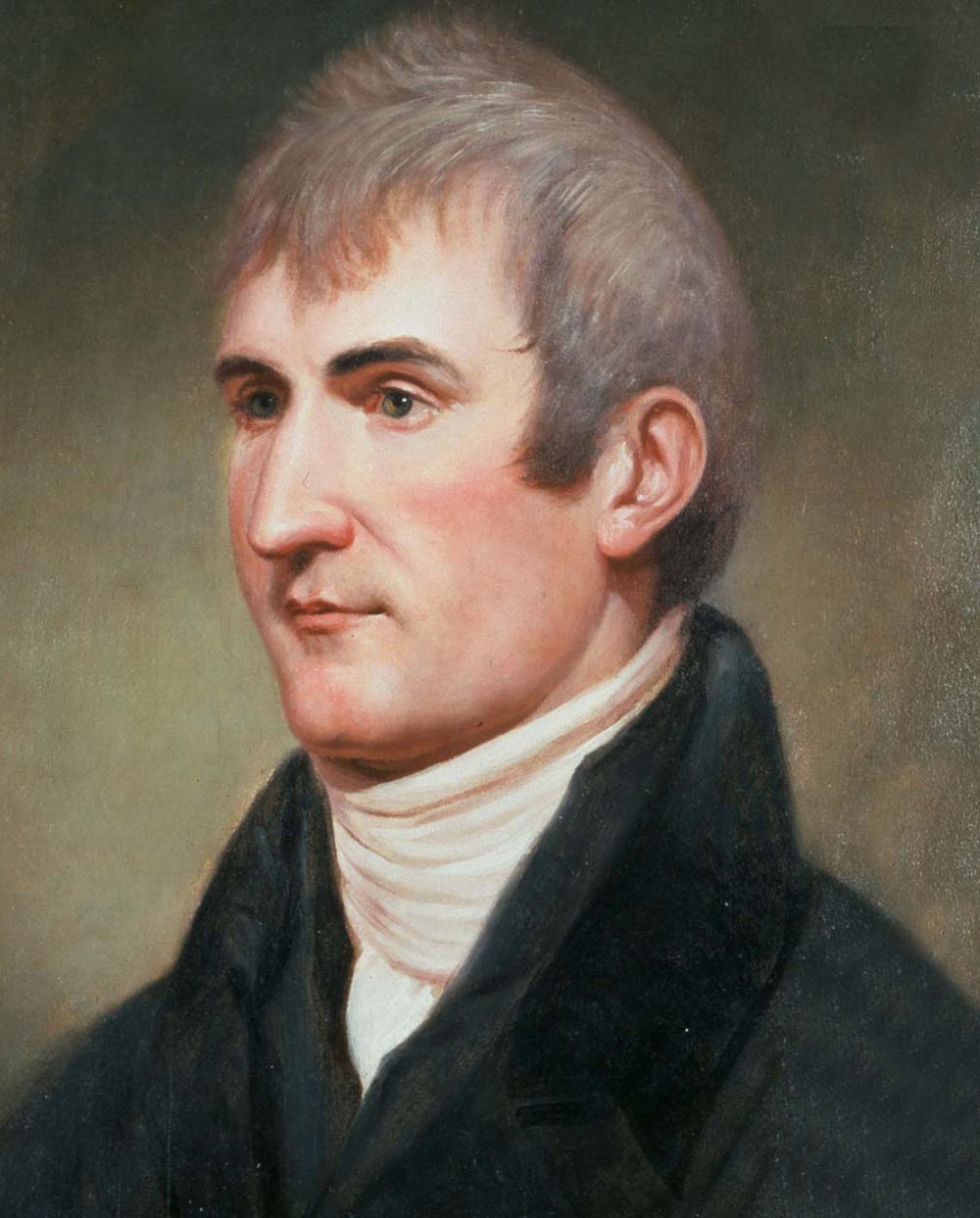 Meriwether Lewis (1774-1809) American explorer, soldier and politician best known for his leadership of the Lewis and Clark Expedition (1803-1806)

At the age of twenty, Meriwether Lewis joined the army for the campaign against the “Whiskey Rebellion,” and liked the discipline and hardship well enough to remain in the ranks after the emergency was over, rising to the rank of Captain. He was serving as paymaster in February of 1801 when he received a letter from Thomas Jefferson inviting him to become the President’s private secretary and live with him in his home. In his memoir of Meriwether Lewis, Jefferson wrote in 1813 describing Lewis as possessor of:

“courage undaunted, possessing a firmness & perseverance of purpose which nothing but impossibilities could divert from its direction . . .steady in the maintenance of order & discipline, intimate with the Indian character, customs, and principles, habituated to the hunting life. . .” 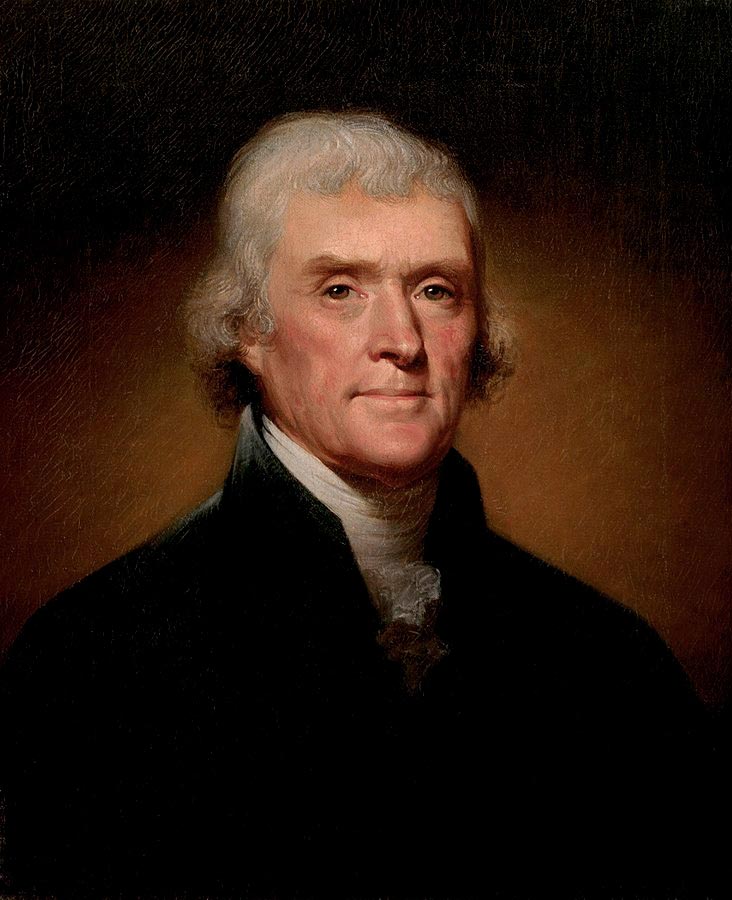 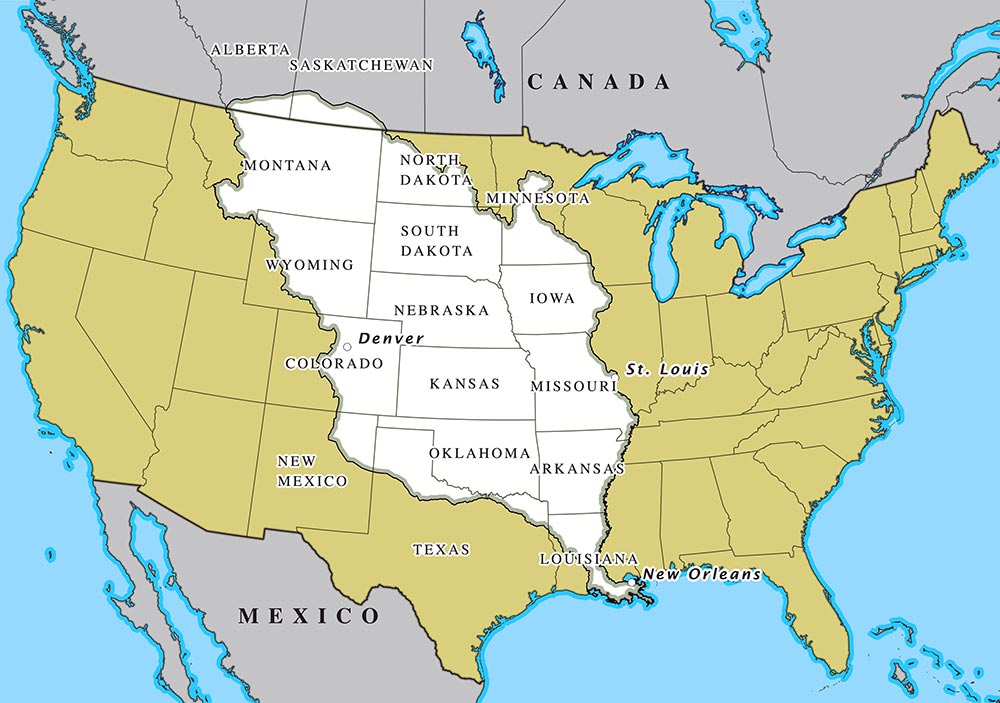 The extent of the land acquired during the Louisiana Purchase is shown in white, overlaid on a modern map of the United States

As is so well known to history, Napoleon Bonaparte sold the Louisiana Territory, 828,000 square miles of land that stretched from the Mississippi River to the Rocky Mountains, to the United States. President Thomas Jefferson appointed Meriwether Lewis to assemble a team of hardy explorers to map the geography of the purchase, establish commerce and peaceable relations with the native inhabitants, and note the flora and fauna of the lands as well as the culture of the inhabitants. Lewis accomplished this amazing commission between May 1804 and September 1806, with the loss of but one man. 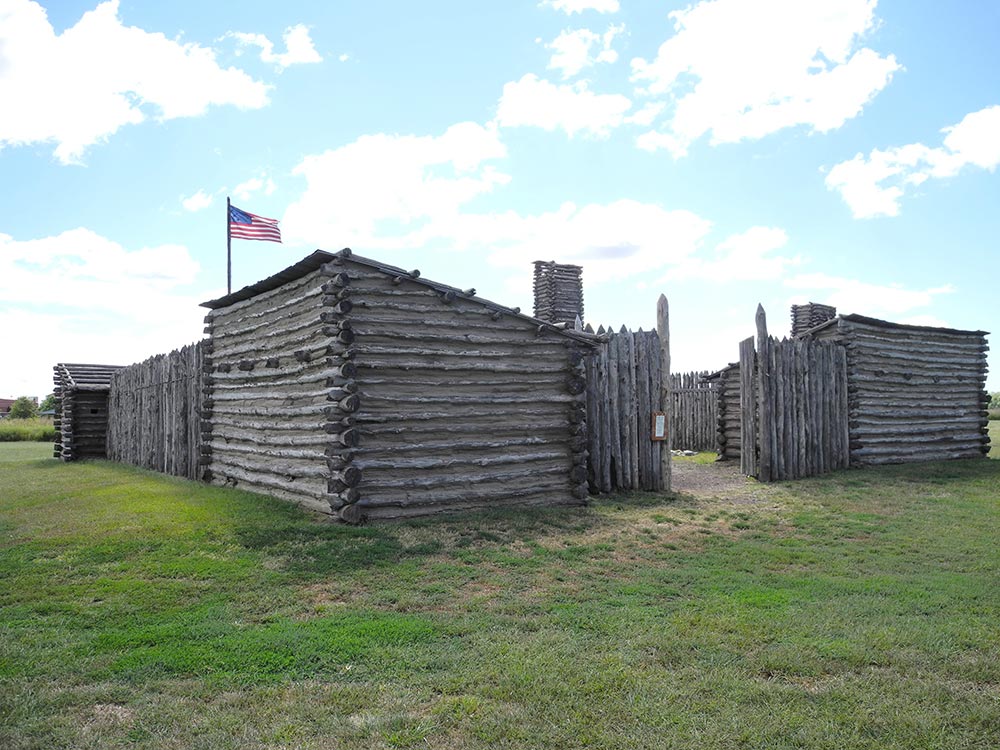 Reconstruction of Camp Dubois in Illinois, where the Corps of Discovery spent the winter of 1803–1804 while awaiting the transfer of the Louisiana Purchase to the United States 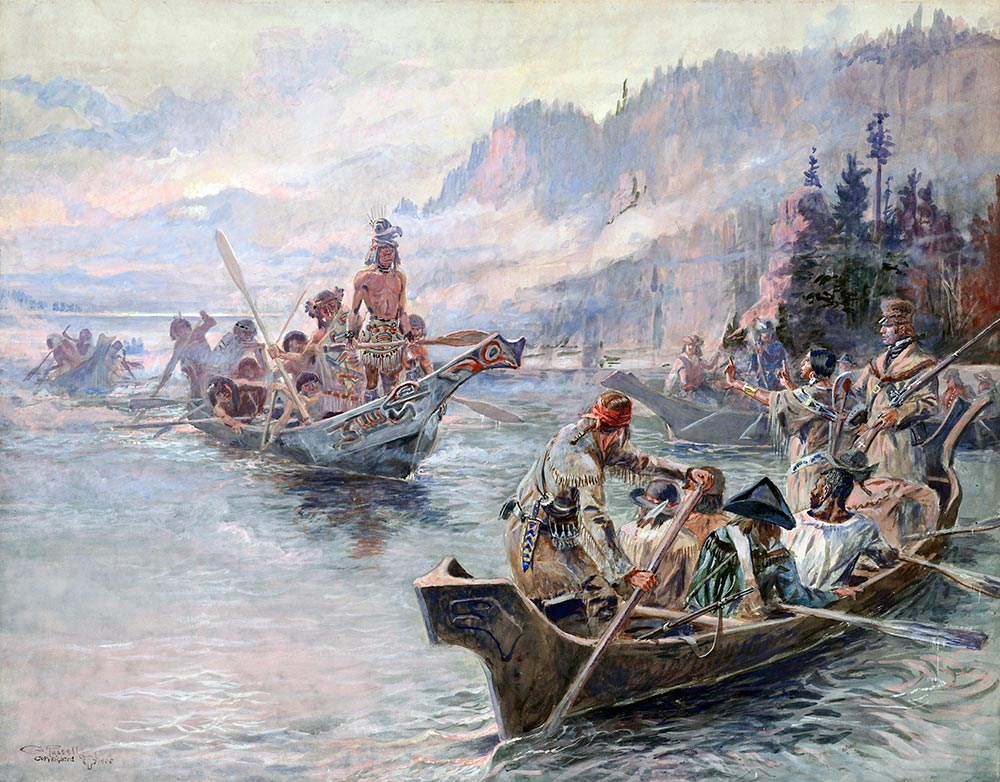 The Corps of Discovery encounters Chinooks on the Lower Columbia River, October 1805

As Governor of the new Territory, Lewis wrote articles for the Missouri Gazette, founded the first Masonic lodge in the West, made many appointments of territorial officials, laid the geographical foundation for the State of Arkansas, and established an intelligence network to help keep the peace among the various tribes that inhabited the vast mountain and prairie realm of the Missouri River watershed. He was opposed on almost every hand by U.S. Army officers who ignored Indian treaty obligations, and by local militias who caused trouble wherever illegal settlements sprang up in the new lands. British agents also tampered with the natives, stimulating conflict wherever they could. Political enemies in Washington cast aspersions on Lewis’s honesty, although those who knew him considered his character without blemish. The Governor was not without his faults—he tended to drink to excess, was fond of gambling, and was undisciplined in his personal finances. 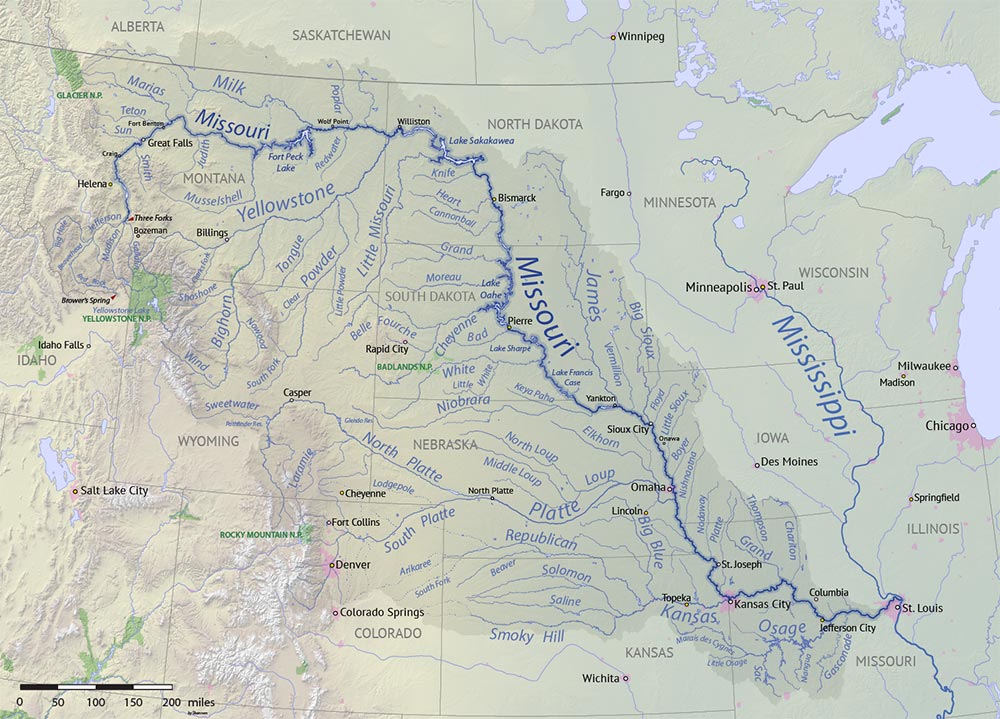 Map of the Missouri River basin

Map of Lewis and Clark’s Track, Across the Western Portion of North America, published 1814

Thought by some to be suffering from illness and fever, Governor Lewis began the long journey to Washington to clear his name and meet with President Madison. In company with Major James Neelly, Chickasaw Indian agent, and a few servants, Lewis joined the Natchez Trace near modern Houston, Alabama. The trail extended from Nashville, Tennessee to Natchez, Mississippi winding through Chocktaw and Chickasaw lands, interrupted occasionally by rude log-cabin “stands” where shelter and food could be gotten for modest price. The Trace, known by some as “the Devil’s Backbone,” harbored masterless men hidden in thickets, renegades from regions which had laws, and frontier-dwellers of all sorts. 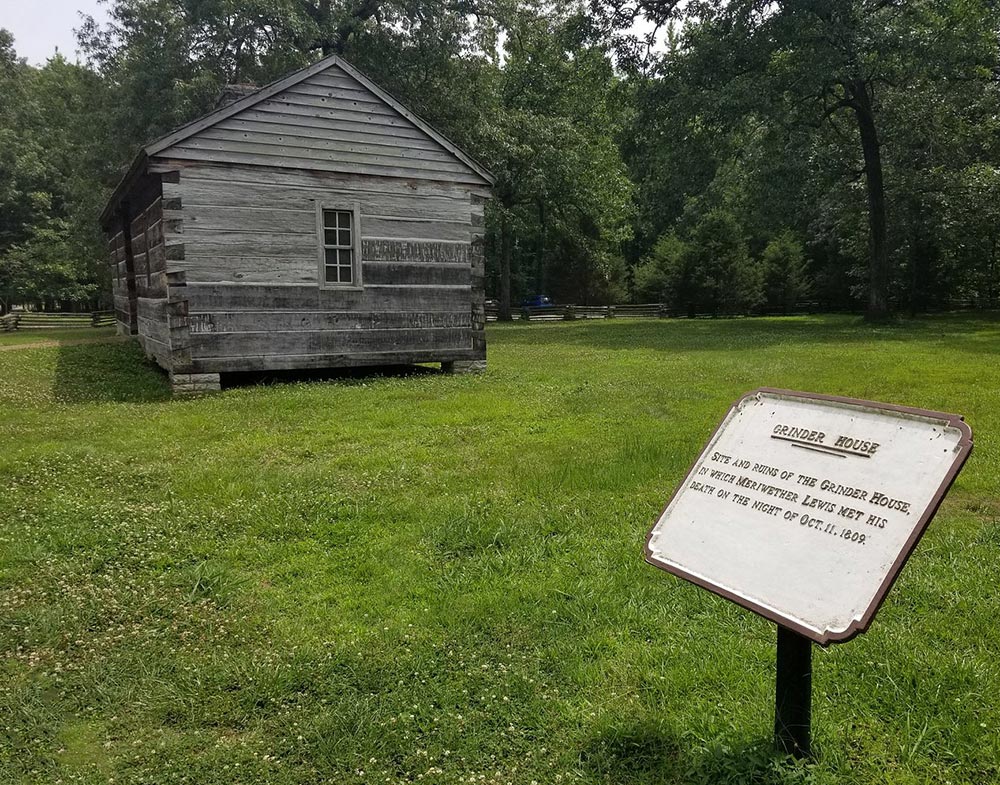 What is known for sure of the fate of Meriwether Lewis is that he stopped by a place known as “Grinder’s Stand,” seventy-two miles from Nashville, and was armed with a rifle, two pistols and a tomahawk. According to Mrs. Grinder (her husband was working elsewhere), she furnished the Governor some supper and later heard him pacing and talking to himself. In the early morning hours of October 11, Mrs. Grinder heard the loud report of a firearm, a loud thud, and a second shot. She heard her guest crying out for water, which she was too frightened to give him. In the morning it was discovered that Meriwether Lewis had been shot in the side and in the head, according to Mrs. Grinder, by his own hand.

It is unknown when James Neely rode up to the inn to find Lewis dead, and to quickly bury him nearby. He reported to Jefferson from Nashville that Lewis had killed himself, and so it was reported nationally, and no further inquiries came from the government. Local people in Tennessee, however, believed it was murder. Testimonies by people claiming to have been there or nearby contradicted one another, as did each version by Mrs. Grinder, herself. Some of Lewis’s stuff disappeared also, including his weapons. As one of Lewis’s biographers stated in 1965:

“Was Lewis murdered? YES
Is there proof of his murder? NO”

Life on the frontier was always precarious, just ask Meriwether Lewis who explored 10,000 miles of inhospitable terrain among wild animals, hostile tribes, and the mortal dangers of rivers and cliffs, to die in a lonely cabin along the Devil’s Backbone. 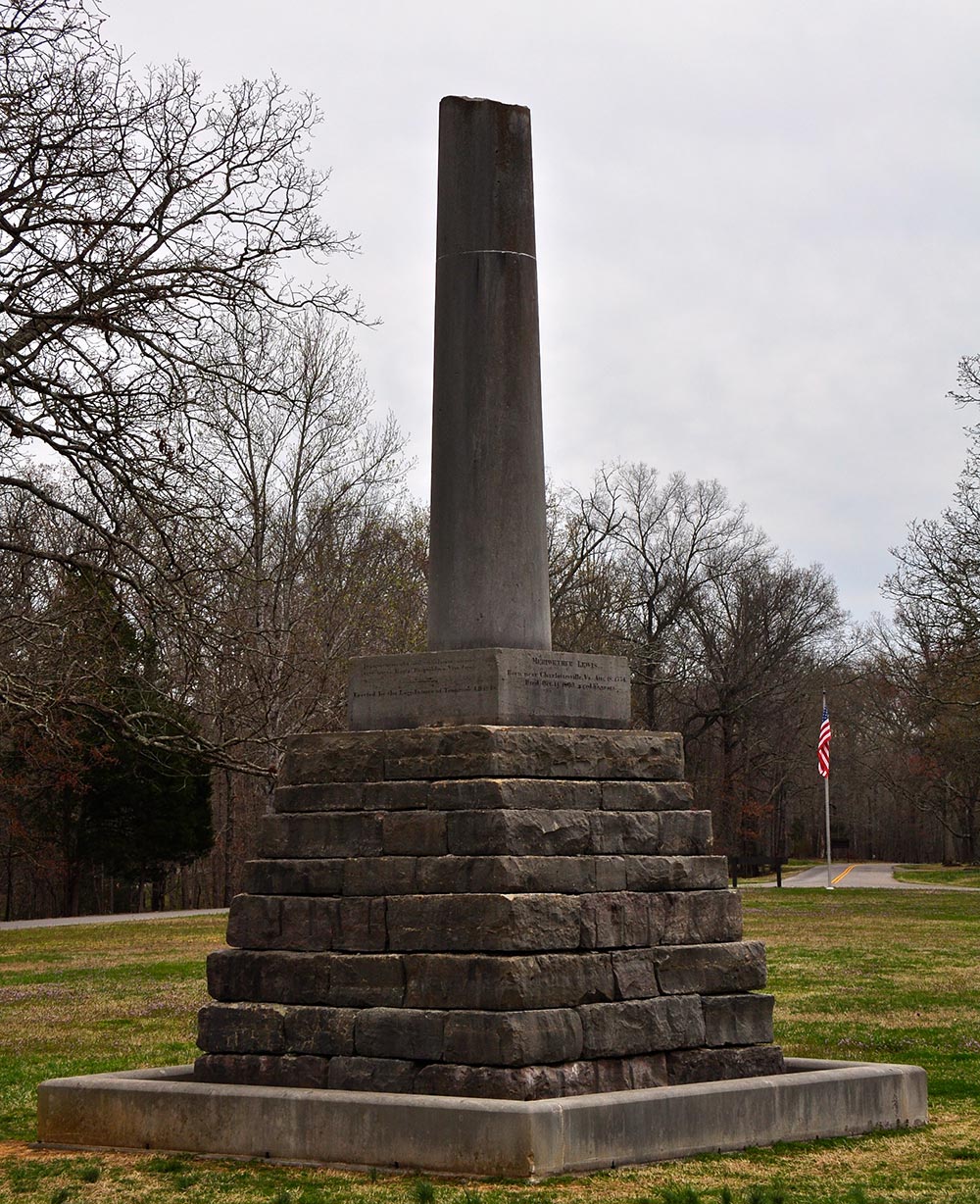