“Hast thou entered into the treasures of the snow . . .which I have reserved against the time of trouble, against the day of battle and war?” —Job 38:22a, 23

is mother’s four brothers served in the Confederate Army in Virginia regiments and his wife’s grandfather rose to captain in a Confederate Tennessee Regiment. His father was awarded the Medal of Honor fighting for the Union in a Wisconsin Regiment in the Civil War, and rose to the second highest rank in the United States Army. Douglas MacArthur himself could look back on the most spectacular career of any American soldier ever born: he fought in three major wars, was recommended for the Medal of Honor three times, awarded it once, received seven silver stars and two Distinguished Service Medals, eventually becoming one of only five men in American history to rank as a “full general.” He became the Field Marshall of the Army of the Philippines. After leading the United States to victory in the Pacific Theatre of the Second World War, MacArthur ruled Japan as the Supreme Commander of the Allied Powers. In June of 1950, China-supported Communist North Korea invaded South Korea, creating a military disaster of unprecedented proportions; in less than two weeks, the United States chose Douglas MacArthur to lead the United Nations’ and South Korean Armies against the victorious North Koreans in 1950. 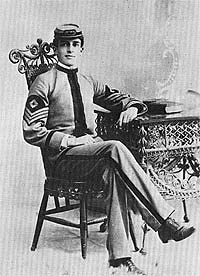 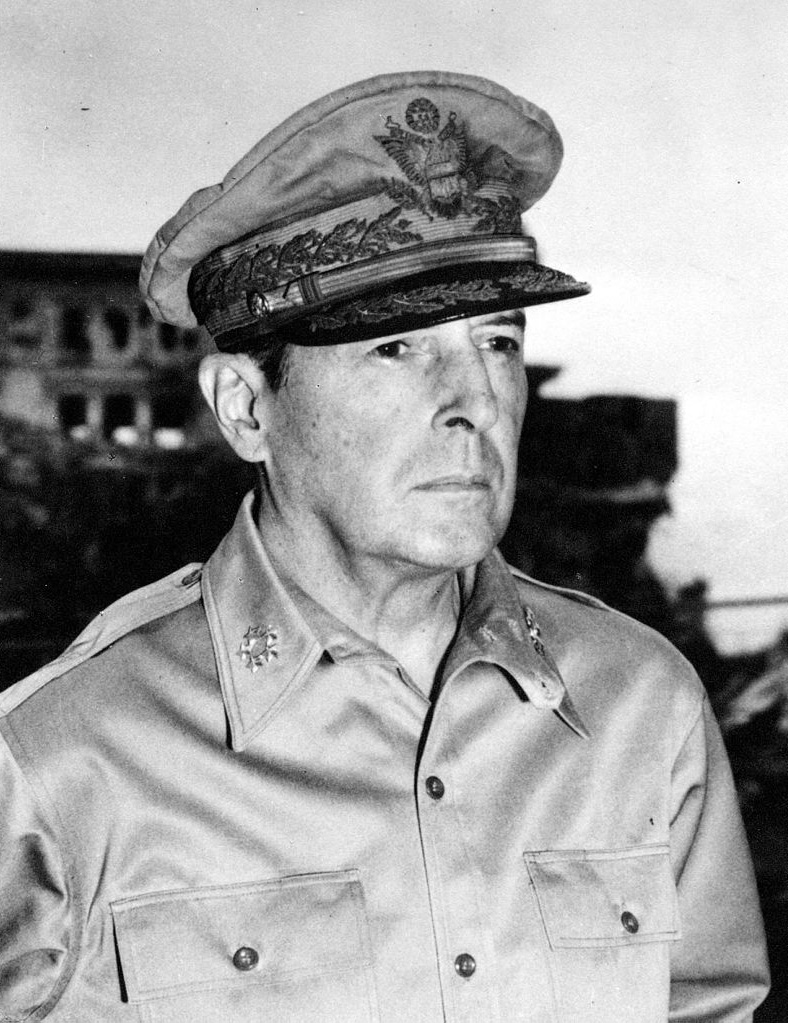 General MacArthur as Commander in Chief of the Far East, circa 1945

General MacArthur faced tremendous handicaps in confronting the Communist invading forces that eventually reached almost three million men. The United States had sent home most of its forces in the Pacific region in the years following the Second World War, and the soldiers that were kept in useful reach for MacArthur were mostly green troops, unprepared for combat. The General himself was approaching his 70th year, had a poor relationship with President Truman, and possessed a personality not always conducive with getting along with subordinates or superiors (not that he thought there were any superiors). William Manchester, brilliant historian of the Second World War said of MacArthur:

“He was a great thundering paradox of a man, noble and ignoble, inspiring and outrageous, arrogant and shy, the best of men and the worst of men, the most protean, the most ridiculous, and the most sublime. No more baffling, exasperating, soldier ever wore a uniform. Flamboyant, imperious, and apocalyptic, he carried the plumage of a flamingo, could not acknowledge errors, and tried to cover up his mistakes with sly, childish tricks. Yet he was also endowed with great personal charm, a will of iron, and a soaring intellect.” 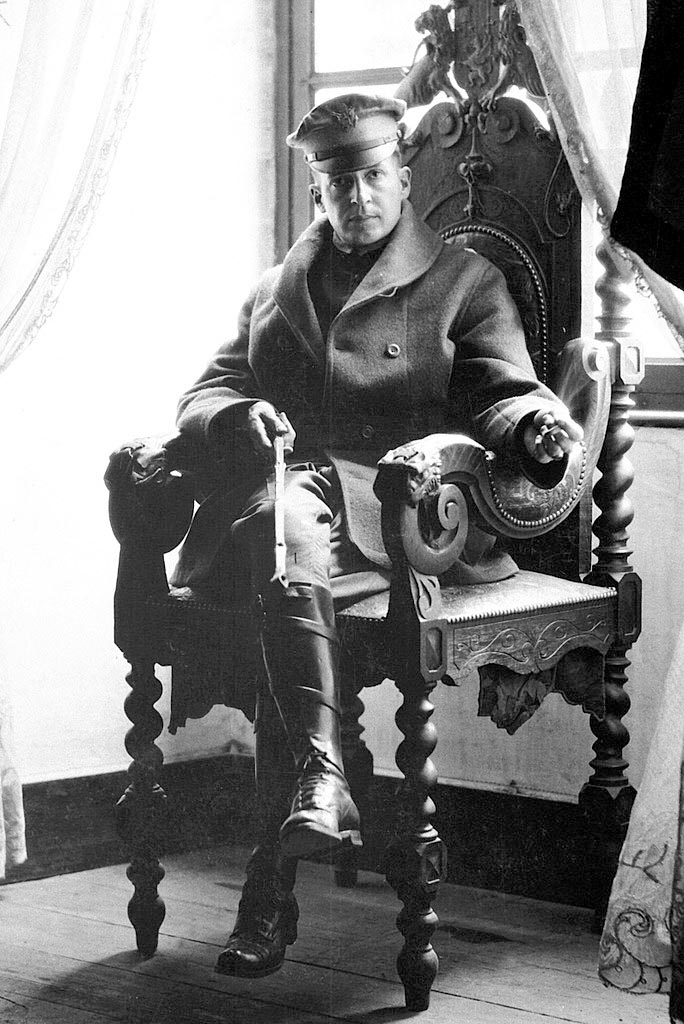 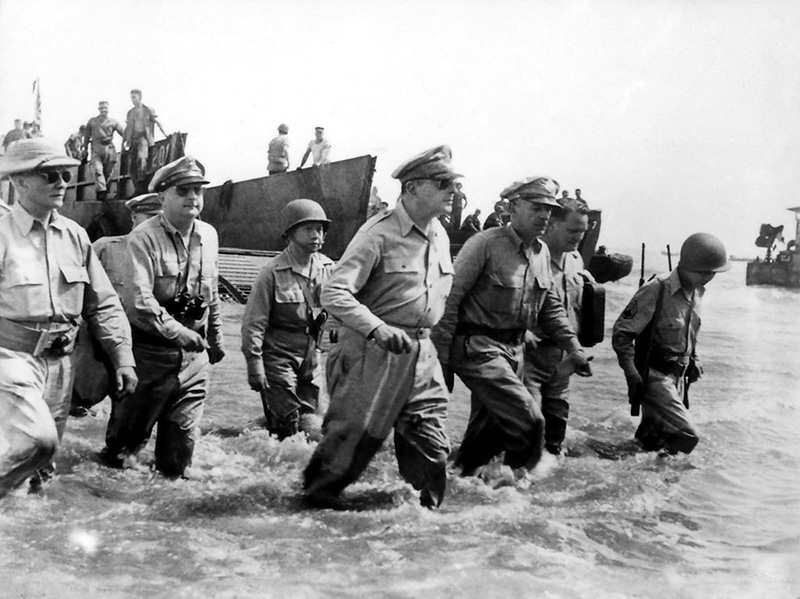 Hundreds of thousands of Korean civilians fled south as the enemy army overwhelmed the Republic of Korea forces, some of whom went over to the enemy and joined in the assault; intellectuals and civil servants were massacred by communist cadres. The battered ROK soldiers and a few American units finally put a stop to the overwhelming surprise attack and held up the communist forces along the one hundred forty mile “Pusan perimeter,” providing a relatively safe haven covering about 10% of Korea. President Truman decided that a stabilized Korea was necessary to the peace of Japan, and found out that the Soviet Union would not retaliate if U.S. troops got involved on a large scale. By the end of August, 1950, General MacArthur had about 180,000 in the line facing about 90,000 Reds. 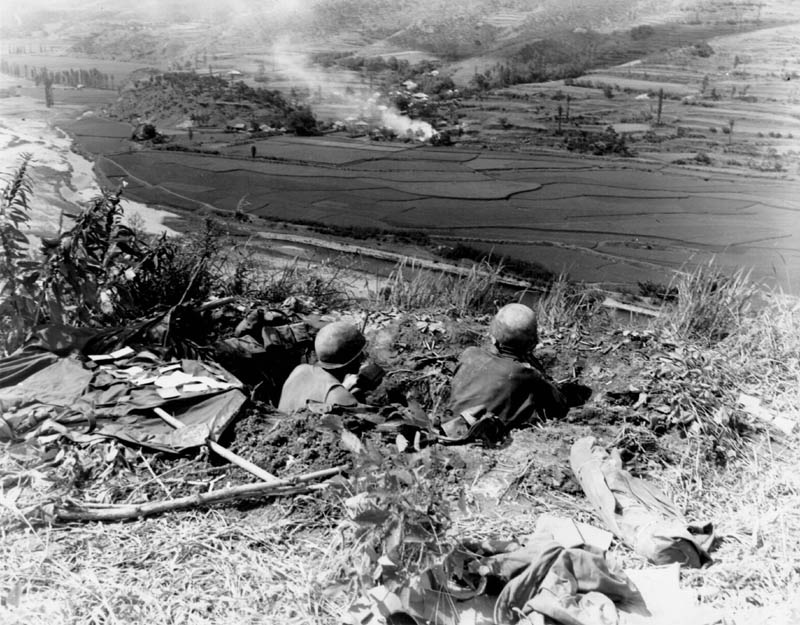 General MacArthur devised one of the most daring strategic surprise attacks in American military history. Several of MacArthur’s top military advisors said it could not be done and should not be attempted. Nonetheless, in a brilliant combined operation, 40,000 American Infantry and Marines landed by sea at Incheon in September, and proceeded to cross Korea, cutting off supplies to communist forces in the south, and driving the invaders into the north, capturing 135,000 KPA soldiers and killing or wounding another 200,000. Simultaneously, ROK and U.N. forces broke out of the Perimeter in the South, driving the enemy into the trap. By October, the South Korean government had been restored to power in Seoul and the 38th Parallel had been established as the northern border. 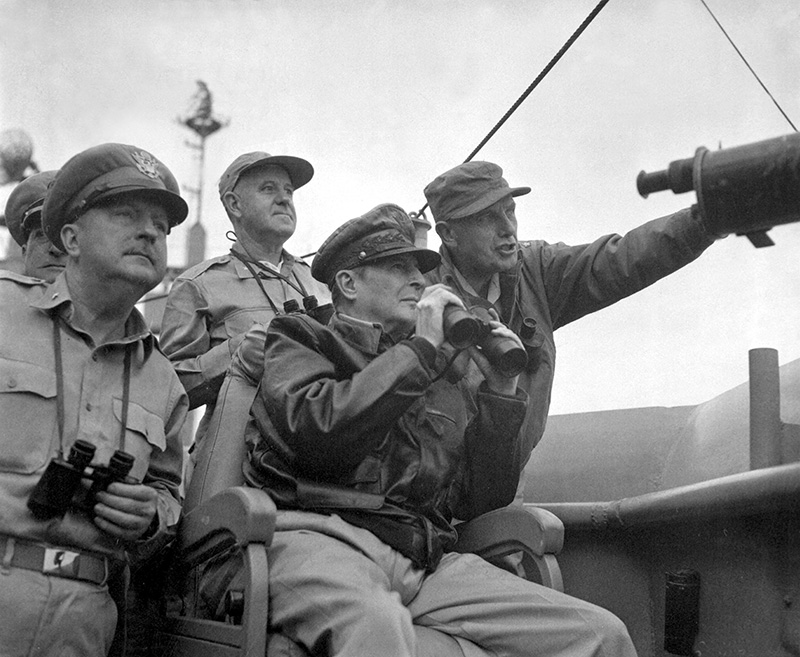 General MacArthur and several officers observe the shelling of Incheon from the USS Mount McKinley, September 15, 1950

Multiple thousands of “Chinese volunteers” swarmed across the border in October of 1950, killing thousands of American and ROK Marines and Infantry at the Chosin Reservoir, and dozens of hilltops and valleys of the rugged North Korean terrain. President Truman fired General MacArthur for disobeying orders, and risking an all-out war with Communist China, when the General ordered bombing of the supply lines and travel routes of the Chinese soldiers flooding into Korea to kill Americans. General MacArthur’s arrogance and lack of political savvy proved too much for the Joint Chiefs and the President to endure any longer. By the end of the War in Korea, more than three million were dead, including more than two million civilians. About 37,000 American soldiers died and more than 100,000 were wounded. 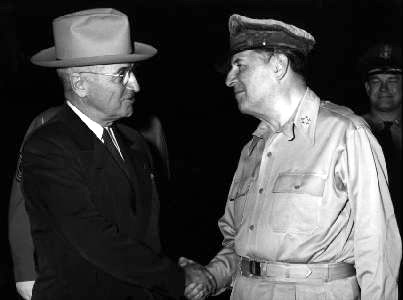 President Truman and General MacArthur at the Wake Island Conference, seven months before Truman would relieve MacArthur of his command

Douglas MacArthur returned to the United States: for some, the greatest war hero ever, for others, a man with too many personal flaws and not enough political clout to take on a President just as stubborn, but in full political power. 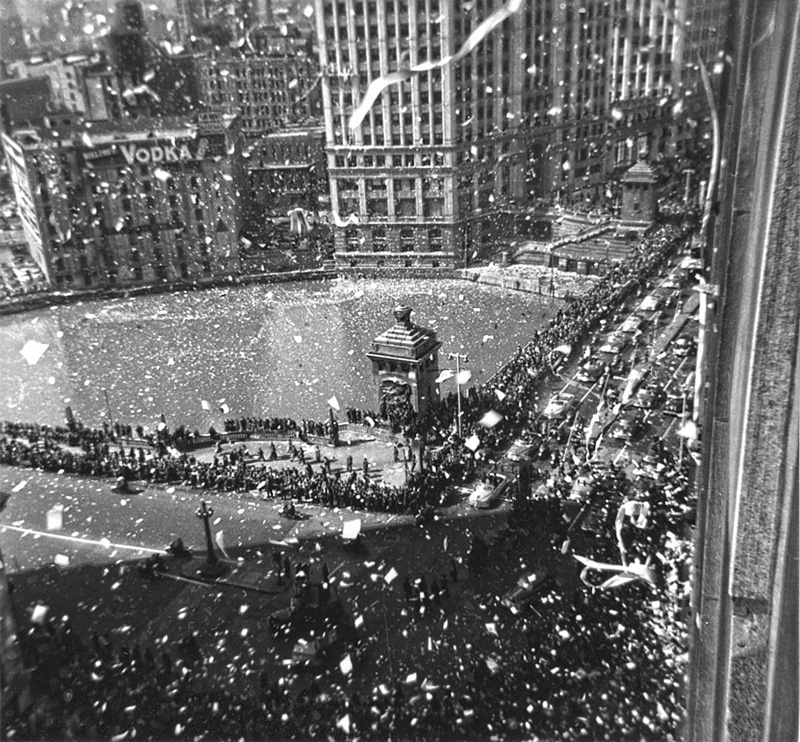 General MacArthur is greeted by a grateful public in this joyful ticker tape parade, Chicago, IL, 1951 (MacArthur is in the second car)